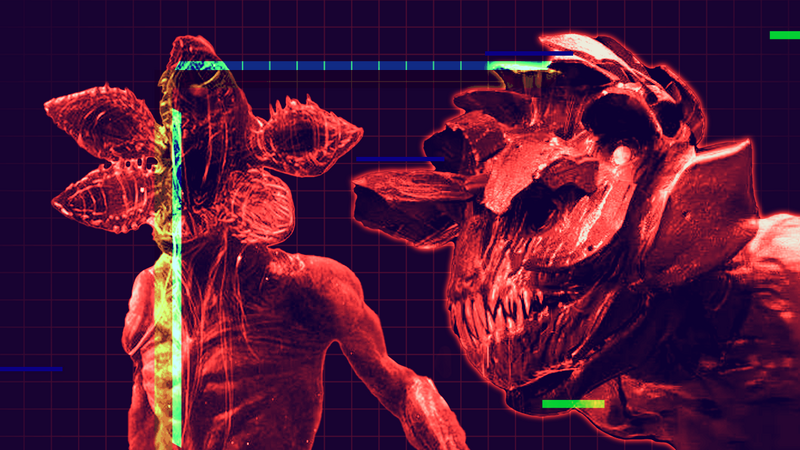 What Conditions Would It Take For A Quiet Place’s Creatures to Actually Exist?

“Bear in mind that I principally study seabirds,” laughs Dr. John Anderson, a lecturer in ecology, animal behaviour and more, at the College of the Atlantic in Bar Harbor, Maine. Born in New Zealand, raised in England, John thinks he’s seen A Quiet Place… until he realises he hasn’t. He’s thinking of Netflix’s The Silence, a middling end-of-days Stanley Tucci vehicle, largely forgettable but for some good monsters and a decent Kiernan Shipka performance. “But hey, the two plots sound extremely alike,” he says. Well, they are, let’s face it. And we’re here for John’s ecological expertise rather than his movie knowledge. That’s our job.

We’ve come to talk to John because, with the release of A Quiet Place Part II imminent, we want to better understand the monsters that made the 2018 original such an unnerving watch. Hypersensitive hearing. Indestructible, armoured skin. Spidery limbs propelling said creatures to astonishing speeds. In the absence of Sir David Attenborough’s dulcet tones, John will have to do. “I’ll try my best to explain how they might have come to be,” says John. “You should also know that my favourite movie is Casablanca.”

John, let’s start with the creature’s blindness. How would a predatory species come to be blind?

“Well, the most likely explanation for loss of vision would be if said species had evolved in a completely dark environment, like a cave. One of the big problems I had with The Silence was that the only thing that’s similar to the creatures in that movie – which are essentially blind, carnivorous birds — are bats. And the thing with bats is that they reproduce incredibly slowly. It was quite ridiculous that there were hundreds of millions of said creatures. The question is, how do you conjure that one?”

What do you mean?

“I mean, what were they eating while they were reproducing? And how did they get to this huge population size with nobody noticing? There’s no confirmation whether these creatures are terrestrial or extra-terrestrial, but the filmmakers are making some massive presumptions about auto-intolerance. Think of the difficulties that humans have when we start eating foods different to our usual diets. You’ve got a creature that, as far as the plot goes, has never been exposed to human flesh, then suddenly it’s eating a brand-new food source with no apparent difficulty. That’s a problem. You can apply everything I’ve said for the creatures in The Silence to those in A Quiet Place.”

What about the armoured skin of the creatures in A Quiet Place?

“It suggests that they’ve got an extremely large cuticle [an arthropod’s hard outer covering], which poses lots of questions about temperature regulation. And they’re very fast creatures, right? Armoured creatures that we know about tend to be very slow. Natural selection tends to follow certain branches within lineages, so if you’re going down the armoured branch you don’t go beyond the speed lineage. There’s a reason why we say things are as slow as a turtle or as fast as a jaguar. [One exception is the armadillo, which has both an endo- and exoskeleton and is said to reach speeds of 30 miles per hour]. When jaguars came to be, they came about in an environment with lots of fast-moving prey like antelope and zebra. Turtles came about in an environment with lots of slow-moving things, like worms.”

Interesting. What about their enhanced hearing, which they use to hunt?

“One of the problems we face when we think about the conservation of bats is ambient noise pollution. Humans are brilliant at creating noise, both in the air and in the water. Increasingly, we’re more and more concerned by what effect that’s having on creatures who are able to hunt by sound. Bats use very, very high frequencies to locate prey, but that means they do so at very short range. If the creatures in A Quiet Place were using the same techniques, they’d have to be pretty close to their prey in order to pick them out [which would probably make for a less tense film]. The problem with high frequencies is it doesn’t cut very well through high-clutter environments. You’d have to have low frequency for that.”

What other creatures that we know of hunt like that?

“Certain marine animals hunt at high frequency, but they use low frequencies to communicate with each other because that can cut across the ocean floor. But do you know what I have a really, really big problem with? Like I said about The Silence, you just wouldn’t have a species go from no population to a population that could threaten the human race, without anybody noticing well on the way. The creatures in A Quiet Place aren’t small. If they’re grabbing children and killing them to death, somebody is going to notice, y’know?”

“Any creature we know of that behaves like this, normally they tend to be very slow at reproduction. I’m talking one baby every other year. That would require a lot of breeding in the darkness, or if they’re extraterrestrials, interstellar invasion [which wouldn’t go unnoticed].”

It’s really interesting what you say about noise pollution. I guess A Noisy Place doesn’t have the same ring to it, but do you think the humans in the movie would stand a better chance at surviving if they lived within lots of noise, not quiet?

“Put it this way. If I was faced with said creature? I wouldn’t be tiptoeing around. I’d be heading straight to my local physics lab and taking their white noise generator. Then I’d hook it up to my amps and my speakers and I’d crank it right up. You’re bound to hit upon a frequency that will totally shut down their system. I’ve seen it done to bats. They go crazy.”

You’ve sort of arrived at the conclusion of the original movie there, John. I’d like to know this, though; a common trope in drama is that a blind person – or anyone with an absent sense – experiences the development of their other senses to compensate. Is there any truth to this?

“In my limited experience with blind people, they do pay much closer attention to sound than a person who can see. And they operate amazingly well within known environments. I would say that within a known environment it does appear that someone is able to acquire a more acute sensitivity to sound – blind people navigating their own homes, for example. And it’s pretty well documented that some people can detect objects in front of them by clicking their tongues – it’s a pretty cute party trick. But outside of that… well, locating a moving target is much more complicated than moving through an open door.”

Well, that’s the premise of Daredevil ruined for everyone, John. Thanks for your time!

A Quiet Place Part II hits screens in the US on May 28 and the UK on June 3.

If you love deadly monsters, check out our Resident Evil Village shoppable article with merch to Fandomize your home; it’s packed with interesting franchise insight too.

For more horror goodness, click on our exclusive interview with the director and cast of Spiral: From the Book of Saw below.