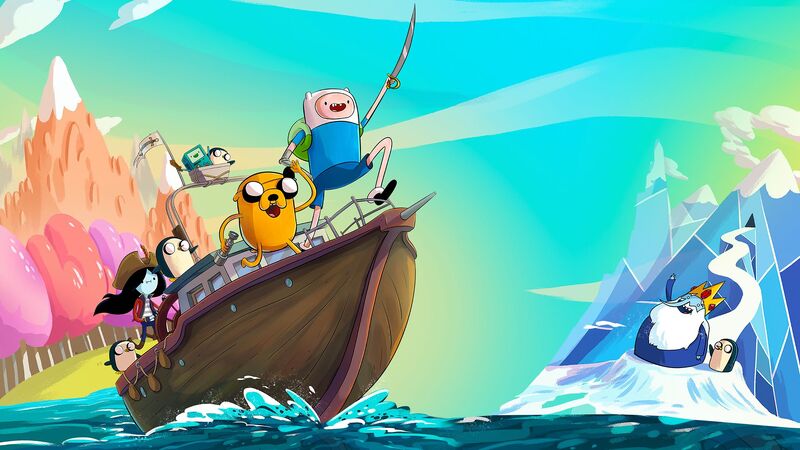 ‘Adventure Time: Pirates of the Enchiridion’ Review: A Faithful, but Basic RPG

In case you’ve been living under a rock for the past decade, or don’t watch cartoons but decided to read a review of a video game based on one for some reason, here’s a quick refresher on Adventure Time. This colourful animated series follows the adventures of Finn, a heroic human boy, and Jake, his yellow talking dog as they roam the cutesy post-apocalyptic Land of Ooo. And it’s pretty darn brilliant.

While it’s obviously aimed at children, thanks to some silly and abstract humour, over-the-top voice acting, and surprisingly deep (and often chilling) lore, the show has managed to amass a rabid adult and teenage fanbase too.

More importantly though, its charming and colourful cartoon world of swords and hijinx is one that’s simply ripe for video game adaptations. But so far, video game-loving fans haven’t had much luck with Adventure Time.  Previous releases, such as the exhaustingly named Explore the Dungeon Because I Don’t Know! and Hey Ice King! Why’d You Steal Our Garbage?!!, felt like Cartoon Network merely slapped the Adventure Time brand onto the most basic of gaming concepts and called it a day.

A license to thrill?

Now though, fans are hoping that might change. Why? Because Bandai Namco is publishing the first ever open world Aventure Time RPG– Pirates of the Enchiridion. With the show set to air its last ever episode later this year, this game could be the perfect way to say goodbye to the land of Ooo. So, does Pirates of the Enchiridion finally do justice to Adventure Tim eas a video game adaptation?

The game opens with Finn and Jake waking to find the Land of Ooo has flooded and transformed into a vast ocean, thanks to the villainous-but-lovable Ice King’s Kingdom having almost entirely melted. Very conveniently, the duo finds a makeshift boat nearby their destroyed home, and sets sail to find answers in this newly oceanic Ooo.

Although the sailing aspects may be Pirates of the Enchiridion‘s namesake, it’s perhaps the game’s most boring element. Initially, the sailing gives off strong Legend of Zelda: The Wind Waker vibes, but it soon becomes apparent that instead of being the open world we hoped, it’s actually more like your average old-school RPG’s overworld map. And sadly, it’s just as barren.

With the exception of the odd item out at sea for Jake to grab a hold of, there is absolutely nothing of interest to interact with, and these sailing sections act as little more than a way to travel between the waypoints of the various islands around the land.

A (not so) Open World

The one that saves the sailing though, is that these sections contain some of the most genuinely charming moments in the entire game. Thanks to some brilliant performances from the show’s original cast,  we couldn’t help but smile whenever Finn and Jake broke out into song on their journey across the sea. This is reflective of what is perhaps the game’s greatest asset in general. Unlike with previous adaptations, its developers have clearly done their research to understand the show, and have made the effort to emulate the sort of story and dialogue you’d expect to see and hear in a typical episode.

Its characters feel like they do in the series, and its comedic personality is a perfect fit, which, unfortunately, is a real rarity for licensed video games.

The only fault in regards to the personality of the show – which is, let’s be honest, is the single most important element for fans – comes on the technical side, particularly in cutscenes. Although the graphics are generally charmingly cel-shaded, the animation is at times pretty janky, with lip-syncing a little off, and character’s expressions often seemingly unfitting of the situation or dialogue. Finn, for example, appears to be smiling regardless of what he’s actually saying, which is… well, a little weird.

Additionally, there’s some general freezing and juttering in the minute-to-minute gameplay, but if you came into Enchiridon expecting the quality and polish of a blockbuster title,  quite frankly, you were always going to end up disappointed.

Outside of the sailing sections, there are two other primary modes of gameplay. Once you’ve disembarked from your boat, you control your party in very simplistic and (at times) excruciatingly linear platforming and puzzle segments. Much like the sea, it may at first look more open than it is, but you are effectively set on a very linear path. It feels like the same sort of basic video game concept that licensed titles have been doing since the PlayStation 1 era, bringing little new to the table.

Oh, and Jake can transform into a motorbike for these sections – just don’t ask where the motor sounds are coming from.

Thankfully, these bits are quick enough that they don’t often outstay their welcome. When it comes to the rest of the game, the overworld exploration wasn’t the only thing the developers borrowed from 90’s RPGs. If you’ve ever played a turn-based RPG before,  battles are going to feel all too familiar. When you encounter an enemy, everything plays out exactly as you’d expect an RPG unwilling to shake the boat would; you’re given the option for a standard attack, to use an item, such as a heart vial to recover some of your health, a block, or a special attack.

Special attacks use some of your energy points, which slowly replenish during the course of the battle, and range from simply inflicting more damage, hitting multiple enemies or causing a status effect, such as freezing or confusing. Your ultimate ability, or final attack, can be initiated once a party member takes a significant number of hits during the match, and enemies have their own elemental strengths and weaknesses.

Ending a match victoriously assigns each party member XP, which can eventually level them up, and you can utilise the in-game currency to upgrade your heroes’ health, attack power, defence, etc. Losing a match, however, results in you having to load from your last save or automated checkpoint. This isn’t likely to happen often, if at all, as combat is very, very easy and you’ll always have an abundance of recovery items to keep you safe. That is, unless you approach an high-level enemy with a red skull above their heads, in which case we strongly recommend you run away and return once you’ve levelled up.

Pirates of Enchiridion never diverges from established genre cliches that have existed for decades then.

Still, while it’s easier to look at this with our serious gamer hats on, what is important to take away here is that despite the show’s varied audience, Adventure Time: Pirates of the Enchiridionis absolutely aimed at children. It sticks firmly to the RPG genre and licensed game cliches that have been present for decades, rarely straying from that path to risk presenting any original gameplay ideas. While it’ll be a great entry point to RPGs for younger fans, adults will undoubtedly grow tired of it quickly.

Is Adventure Time: Pirates Of The Enchiridion Any Good?

Although it may not be saying much, this is the most authentic representation of the series in a video game to date, and it is comfortably the best game based on the show so far. Yet, unless you are a child or somebody completely obsessed with Adventure Time,  despite its charm, Pirates of the Enchiridion will struggle to keep your attention for long.

Still, if you are a big Adventure Time fan and don’t require every game you play to be an original, stellar experience, there’s definitely fun to be had here thanks to the game’s charm and authenticity alone. For fans looking to say goodbye to the land of Ooo, you could definitely do a lot worse.