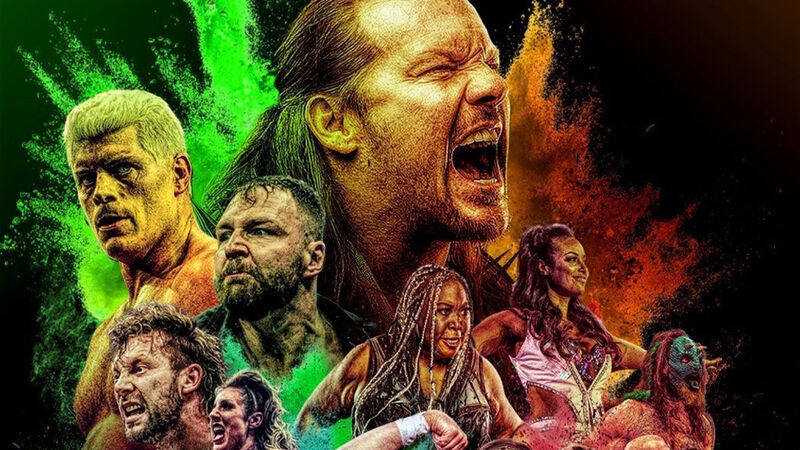 How AEW is Listening to Wrestling Fans

With All Elite Wrestling’s recent debut on TNT, there’s definitely a new game in town. Those looking for an alternative to WWE, or any other promotion that might not be satisfying one’s pro-wrestling proclivities, need only tune into AEW’s Wednesday night show, Dynamite, for a new offering that longs to deliver what fans want.

AEW key roster member and Executive Vice President, Cody Rhodes, has stated that this is a fan-driven endeavor designed for those disillusioned by the current product. But how is AEW listening to fans exactly? What steps and measures are they taking to make sure people leave satisfied and satiated? Let’s go directly to the source – including AEW’s Brandi Rhodes, Jon Moxley, Chris Jericho, and Nyla Rose, who Fandom spoke to at New York Comic Con this past weekend – and find out.

“I would ask you this one favor as we move forward,” Cody wrote in a social media post just weeks before AEW’s premiere on TNT. “Speak to me.” This is one huge way Cody hopes AEW can stand out and rise up above the competition.

During a radio interview prior to Dynamite’s debut, Cody emphasized the importance of fan participation. “It applies to the overall brand as well,” he said. “That applies to social media, that applies to the fans there in attendance, and the fans watching at home and what they liked.”

“Last week, I put out a statement on my social media channel saying ‘Give me the feedback’. If anyone can take it, I can take it. The good, the bad, the why, everything. I want to know because we’re not going to pretend we have all the answers. I got a great education for wrestling and I’m excited about these shows we have ready but I’m ready to hear what the people think too.”

To kick things off, Cody created a Feedback Friday on his Twitter account, where fans were encouraged to share their thoughts about that week’s TV product. Though, the week being as busy as it was, Cody shifted it to Saturday…

My idea was “feedback Friday” but the schedule was too tight, so instead…let’s do it today!

What did you guys think of #AEWDynamite ? 📝

In the words of Cody, “Let me help create and tailor a product for you.”

FOCUSING ON THE NEW

When I spoke to Cody for IGN, he signaled that AEW was going to focus on the younger performers and their potential as future main eventers. “I want us to be more about our young and upcoming crop of talent,” he said.

Speaking to Fandom during a round table interview at New York Comic-Con, AEW Champion Chris Jericho brought up the company’s fresh roster. “One of the biggest things is to get top guys that are new that you haven’t seen at every match,” he said. “And everything combined with the Young Bucks and Kenny [Omega] and guys who have been doing this for years that are amazing and chose not to go to WWE. They’re on national TV for the first time. People are going ‘Who are those guys?.’ That creates a buzz and also amplifies the cool factor. And when you have the cool factor, people flock to it, whether it’s music, wrestling, comedy, or TV. When something becomes popular, people will check it out and start buzzing about it, and that’s what will happen.”

Former WWE Superstar Jon Moxley echoed Jericho’s sentiment when speaking to press at NYCC. “You’ve got a bunch of people with no experience in live TV, so for it to go off as flawlessly as it did, the very first one, it was like a celebration backstage,” he said. “The energy was high, man. That’s addictive. Now I’m like, ‘I can’t wait to get to next Wednesday.’ I can’t wait to keep this momentum going.”

NO SET MOLD FOR STARS

AEW has the most diverse and inclusive roster in wrestling as there’s no prerequisite for how a performer is supposed to look. Chief Branding Officer Brandi Rhodes is all about the best talent rising to the top and not just people who have a specific appearance.

“I don’t have any blinders on,” she said at NYCC. “So what I’m looking for is something wrestle-wise that really gets me. Maybe it’s that people, in the case of Sadie Gibbs, were going, ‘Have you seen Sadie Gibbs?’ I looked into her work and I was like, ‘Oh, this is why people are getting behind this girl, she’s very talented.’ Never mind that she’s in England. Never mind that she hasn’t been on TV before. This is something that people want to see.”

“And it’s the same with everyone,” Brandi remarked. “Riho, she doesn’t speak English. Is that something that’s going to keep us from having her as part of the roster? No. She’s incredible, and she’s got an incredible heart and she’s very, very talented in that ring in many different roles. So I think the answer is not to be looking for anything, just to be having an open mind to ‘Alright, what makes me excited? What do I see that fans are getting excited about?’”

Another element that AEW is being lauded for is its built-in care for the wrestlers who put their bodies on the line.

This isn’t a trait Cody thinks should be AEW-only, however. As he posted a month ago: “Wrestlers now have a chance for better pay and a healthier schedule, and the doors have been opened wider to a wrestling show more congruent with the diversity of our current society. This isn’t because of AEW. It’s because of you, the fans – from diehard to brand new. And, the changes in wrestling aren’t exclusive to AEW. This progress can now permeate all promotions.”

We’re going to try and present quality over quantity,” Rhodes said in his IGN interview. “Which means that some guys are going to have some time off. Which for the life and the well-being of a wrestler is a great thing to hear; that they’re not going to be, every week, putting themselves in a high-profile singles match.”

Cody Rhodes said he wanted to hear the bad as well as the good, and his wife, Brandi, noted at NYCC that she agreed with that request. “Negative, positive, whatever,” she said. “If it’s something that seems like it needs to make a shift, we’re absolutely going to do it.”

“One of the great things about having partners like WarnerMedia,” she remarked, evoking TNT’s owners, ‘is that we have people who can kind of take a look at what people are saying and then put it out there for us as what’s real and what’s not. Because sometimes you get three or four people who are just putting out three hundred messages. That makes it seem like everyone thinks this but when you look at it, yeah it’s actually the same three or four people.”

“So it’s great having them be able to sort for us what actually is a really loud response to something, to see if people actually think it. And then in those cases, we absolutely take it seriously.”

Nyla Rose, who almost became AEW’s first Women’s Champion on the inaugural Dynamite, sees things along the same line when it comes to internet fans. Talking to the press at NYCC, she said, “I just think it comes with the territory, knowing how to navigate the internet, knowing what is what. And it’s like, ‘Okay, well these people are just bitching just to bitch.‘ Let them blow off steam, have their day. And then the other side of that is like, ‘okay, well this person is making some good points.’ Maybe I should try something a little bit different. Why can’t I try it the way they suggest it? There’s no harm to you, your safety, or your character, why not? But that’s up to the artist’s discretion.”

“I think it’s good to have a relationship with the fans,” Jericho said at NYCC. “It’s good to be fan-friendly. But when it comes to being a pro, you know what you need to do. This is what you should do.”

“That’s the attitude I have with fans and critics alike and I pretty much have a good finger on what people want to see,” he continued. “I can feel it after doing this for 29 years. I can almost see a few moves forward. So if people don’t like something right away, you can’t knee jerk. You’ve gotta remember, it’s a very long story that we’re telling.”

Said Moxley, “I think the guys who are at the head of this from day one are really in tune with what their fans want, so I don’t think the issue is going to come up all at once.”

“You can’t just give the fans everything they want all the time,” Moxley stressed. “What I mean by that is, they want the good guy to win. But you can’t just have the good guy win on day one. You can’t have the season finale on the first day. You have to have the whole plan in mind. But I think they’re really in tune with what the fans want.”