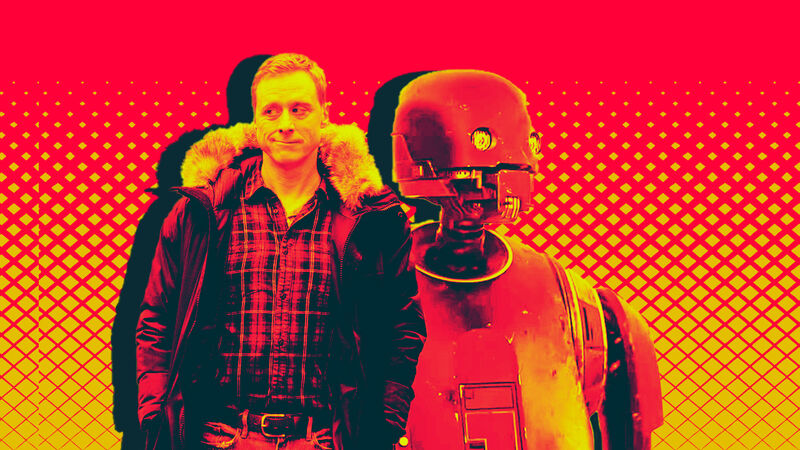 Among his long list of credits, Alan Tudyk holds a very special place in many sci-fi fans’ hearts thanks to his characters in projects like Firefly, Rogue One, and I, Robot. Now, having previously portrayed human pilots and droids who lived in space, Syfy’s new series Resident Alien has the amiable actor playing an alien who’s crash landed on Earth and now must hide amongst the small population of a snowy Colorado town as their local physician.

Based on the comic book series by Peter Hogan and Steve Parkhouse, Resident Alien follows Tudyk’s Dr. Harry Vanderspeigle, who is actually a sinister extraterrestrial donning the late doctor’s form, as he’s drawn into a local murder mystery and forced to conceal his true identity from his quirky fellow citizens – while also using the experience as a learning opportunity to perfect his “human” traits (and ultimately feel superior).

Fandom spoke to Tudyk about Resident Alien, where he drew inspiration from in order to play fledgling human Harry, what his best known intergalactic roles might have in common, and his thoughts about playing K-2SO again, eventually at least, for Disney+’s upcoming Andor series.

A Murderous Mork from Ork

Resident Alien is a comedy first and foremost, but one with a bit of a mean streak. Harry isn’t out to make friends, but instead to exterminate all life on Earth. Or at least that’s what his mission was before his ship took a dive into the snow.

This dark comedy tone was a big part of Tudyk wanting to play the part. “I first liked the comedy and drama aspects to it,” he said. “I’ve always liked those moments, either as a viewer or a participant, when it’s heavy and then it goes along and someone falls from a high place and hurts themself in a funny way. Or the reverse. Especially the reverse, in fact. When it’s funny, funny, funny and then it hits you with something heavy.”

“Luckily for me,” he added, “I’ve done a few plays that have those moments in them, where you’re with a live audience especially, and you’re doing something funny and you know you’ve got this line in your pocket, this moment coming up that just turns everybody and you feel the room gasp. That’s magic to me. So that part I responded too. And the malicious elements are great. It’s like Mork from Ork if he was going to kill everyone on Earth.”

Harry’s got everyone in Patience, Colorado fooled, except for a young boy named Max, the son of the local mayor, Ben. Max is able to see through Harry’s human disguise and recognize him in his true alien form. It’s a revelation that freaks Max out and drives Harry to – well – want to kill off Max.

Of course, Tudyk had a blast playing in these scenes with young Judah Prehn, who plays Max.

“He’s great. I love Judah,” he said. “And then also Gracelyn Rinke, who plays Sahar. She’s almost more of a nemesis because she’s smarter and bolder than this Max character. But I love the back and forth with Max.”

“I break into his room,” Tudyk laughed, about how far his Resident Alien character goes. “Like, I have no boundaries. I’m going to kill him! I’m trying to kill him. He wants me exposed and me killed, I’m pretty sure. Though he is a lot nicer. He doesn’t like any of the cuss words or anything like that where my character doesn’t care. He’s a tough kid. Really tough. I stitch him up without anesthesia. That is so mean! I try to kill him. When I don’t kill him he cuts himself so he can go to the doctor, which is me, and I don’t give him any anesthesia when I stitch him up so he will shut his mouth and he won’t do it. That’s so dark.”

Blending in as a human being doesn’t come easily to Harry. After killing the real Harry, it takes months in Harry’s lakeside cabin for Alien Harry to get used to his new body. Just leaning to use his limbs and speak lines from Law & Order. By the time civilization finds him, he’s still barely presentable.

So what did Tudyk draw upon to give birth to Harry’s mucked-up mannerisms?

“That’s exactly what you do when you get there,” he shared. “Any actor knows, if you go to a four-year school, that they go ‘Great. You had enough talent to get here but now we’re going to let you in on a little secret. You don’t know anything.’”

We don’t know how to walk, talk, stand, or speak. I showed up to Juilliard with a Texas accent and they were like ‘Yeah, you don’t pronounce it CEE-ment. Just so you know, Alan. It’s cement.’ And they tell you ‘This is the proper way to speak’ and they have this authoritative, definitive way of doing all the things. So you have to relearn everything. So having those tools helped in approaching Harry because he truly doesn’t know how to do anything. He doesn’t even like the ways his genitals work. Like there’s this design error that it keeps shifting to the left in his pants. He sees it as this huge design flaw.”

Tudyk hit the sci-fi pop culture jackpot when he played Wash on Joss Whedon’s Firefly, and then in the sequel film, Serenity. He’d later enter a much larger universe, with an even more rabid fandom, when he played K-2SO in Rogue One. Tudyk feels so at home in space-based stories that Dr. Harry feels like the next natural shift for him. And he’s not so different from K-2SO.

“They both have an immaturity in that they just say things, straight up, that they feel and it shocks other people in social situations,” Tudyk explained. “K-2 was reprogrammed, obviously. There used to be a line — in fact it wasn’t until recently that I realized they didn’t use that take in the movie — where K-2 first meets Jyn Erso and K-2 says [K-2 voice] ‘No one likes you.’ That was his line. It’s a very Harry thing to say.”

“Wash, though, is so very close to me, I feel like. He’s the guy who, when everybody’s like ‘Okay, we gotta go in there and kill two people,’ Wash is like ‘Wait, hold on. Why killing? Why is killing the first thing? We could just run away?’ I could be that voice in the crowd. ‘Why go there? We could just leave. I’m comfortable with that.’

But would these three characters be able to be friends? Or are their differences insurmountable?

“I think Wash and K-2 would get along very well, Tudyk said. “Wash and Harry though? Harry’s a tough guy to get along with. K-2 and Harry, they might be okay with one another. I don’t think they’d like or dislike each other. Maybe K-2 would smack him around. They’d be equally arrogant.”

A Return to Star Wars

Tudyk recently told Collider that he doesn’t expect to appear as K-2SO in the first season of the upcoming Star Wars prequel series, Andor, for Disney+. But that doesn’t mean he’s not excited to eventually return to the role, which he expects to happen should Andor continue.

“I want to see how all that went down,” Tudyk told Fandom, regarding the dynamic between K-2SO and Cassian Andor. “Cassian and K-2 started out as enemies, you know. K-2 was on the side of the Empire. So Cassian would have to catch K-2 and then reprogram him.”

In fact, Rogue One at one point could have included a scene showing K-2SO’s more nefarious side. “There was a scene, actually an audition scene for Rogue One, where, in evidently an early version of the script, they are landing on a planet that has a weird magnetic field that disrupts K-2’s operating system,” Tudyk recalled. “So he goes haywire. That was the audition scene. And that was a lot of fun. So I can see some of that being used in an early version of programming K-2. What are the first attempts to get to what we know K-2SO to be? Which [still] isn’t perfection in the personality department. So then what are the bad versions of that? Anything with Diego Luna, the two characters together, Cassian and K-2, it’s such a fun partnership that I’m always on board for it.”