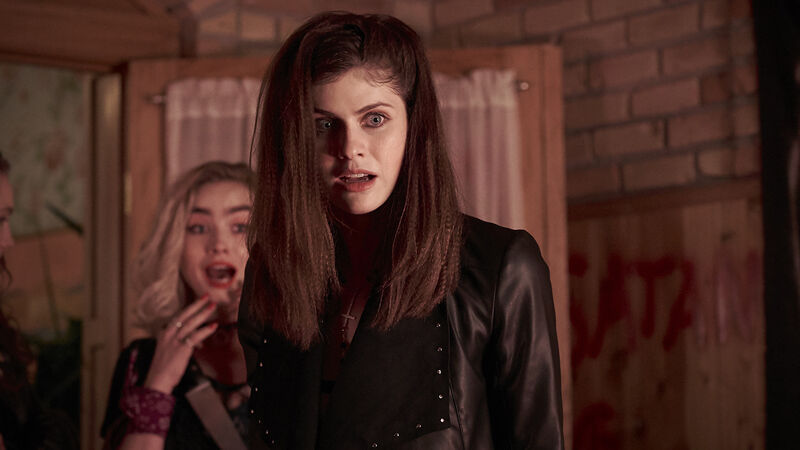 Released on digital this weekend, the film We Summon the Darkness, directed by Marc Meyer (My Friend Dahmer), stars Alexandra Daddario (San Andreas, True Detective) as Alexis, a young woman traveling with two friends, Bev (Amy Forsyth) and Val (Maddie Hasson), to a heavy metal concert in the late 1980s. As the news reports on recent murders believed to be part of satanic rituals, the trio meet three guys (played by Keean Johnson Austin Swift, and Logan Miller) who want to party with them – only for things to turn very dark, very quickly, in a film that includes some fun and twisted swerves along the way.

Fandom spoke to Daddario — who is also a producer on the film — about immersing herself in the era of big hair and heavy metal, working alongside Johnny Knoxville (who plays Alexis’ father), and the appeal of acting in horror movies.

We Summon the Darkness isn’t just a movie set in the 80s, it’s one focused on a specific subculture, following a group of metalheads following their favorite bands around.

“It was a world I wasn’t familiar with, actually,” noted Daddario. “It was really cool and it was so fun to go into work every day and get my hair crimped and have big hair and crazy outfits. I think it allows for our performances to be really fun and out there. And it deals with a time in America when we were really dealing with different things. I liked getting to embrace the ridiculous side of the ‘satanic panic.’”

There are a lot of specific touches in the film for those who came of age in the 80s, but for Daddario, who wasn’t born until 1986, “My problem is that I don’t remember the 80s at all! So this is more for the people running the show were more nostalgic for it than I was. I was more learning what was popular. But it was a really detailed set. I know they wanted to make sure everything was really authentic to the time period. And we drove an old car! I love that; I love period pieces.”

As Daddario referenced, the film deals with the satanic panic of the 1980s, with many reports – mostly unfounded – of satanic rituals connected to or causing horrific crimes. In the midst of this, the world of rock music, and heavy music specifically, would sometimes come under fire for its lyrics and imagery and supposed ties to bringing youths down a dark path, which We Summon the Darkness touches upon.

Said Daddario, “I think the world that we’re in now and the things that we worry about now and the things we talk about now are so different than the things we were worried about then, or even in the early 90s, when people were freaking out about Howard Stern or Real Sex on HBO. And ultimately, that kind of stuff seems like nothing now. But it was interesting to dive into people just freaking out. Well, people are always freaking out, right? [Laughs] There’s always something to freak out about, so we got to do a film where people are freaking out about this particular thing; satanic panic.”

Daddario said she was quickly drawn to We Summon the Darkness thanks to, “The story and the characters. I love Alan Trezza’s writing.” Daddario had worked with Trezza before on the comedic zombie film Burying the Ex, directed by Joe Dante (Gremlins), and recalled, “Alan had approached me about the project and we ended up getting financing for it. I love Alan. He’s a great guy and a great writer. In his scripts, he has such a sense of fun and play, while also being grounded, and he writes really strong characters. Burying the Ex, which I’m really proud of as well, had the same thing. So we really got to have a blast. All of the actors, they totally got it; The down to earth feel, mixed with the fun and absurdity of it. Everyone did such an incredible job and that’s, I think, one of the reasons why the movie works so well.”

Daddario’s father in We Summon the Darkness is played by Johnny Knoxville, and when it was pointed out that she has now played the daughter of two highly distinctive, but very different, actors in the form of Knoxville and Dwayne Johnson (in San Andreas), she said, with a laugh, “Yes, I’ve told my agents that I will only take roles that have very, very famous men playing my father in them!”

Knoxville, of course, is best known for his death-defying stunts in Jackass, and Daddario observed, “I will tell you, in my experience, he was incredibly concerned about safety. He was very professional, very mild-mannered, and just really, really cautious. Like I have these long, dangly earrings in the film and he was really concerned about one of them getting ripped out during a specific scene. No one knows better than him. He’s seen it all! So in a way, that makes a lot of sense. Someone who’s seen it all, they’re not more lax about it. They say, ‘Look, I know what can happen, so let’s be safe.’ And that’s great because sometimes on sets, you’ll see people who don’t have a ton of experience with it, and they don’t mean anything by it, but they just don’t realize what can go wrong. So I found it was really comforting to have him around.”

Daddario has managed to avoid one type of project, jumping back and forth between comedy, drama, action, and more. She’s now done several horror projects though, including Texas Chainsaw 3D and American Horror Story, and said, of those projects, “I think it’s really fun. I think I’ve become a better actress over the last 10 years and one of the things I really credit to that was that one of my biggest problems was fear. I had stage fright type fear, and I’d feel like it was the trouble of getting out of my head.”

When it came to moving past that fear, she said, “I credit the [horror] genre and acting classes as well, which is sort of a similar thing because you have to put yourself really out there. If you’re doing a monologue and you have to cry and you’re in front of 20 people, you have to let yourself be able to do that in front of 20 people and not worry about what they think, which is harder than you’d imagine. So being on a film set like this, where you have to scream and cry and really go for it and not worry about what people think and sort of lose it like that, it’s a good stretch of getting out of your head and not worrying about what people think.”

Regarding We Summon the Darkness, Daddario noted, “This film, in particular, I found it had a comedic twist to it. And I really love comedy. So I think that there’s a real sense of humor to some of these genre films that make it a lot of fun, which is why I think we keep going back to them over and over.”

Daddario’s first big horror role was in Texas Chainsaw, where she played a character, Heather, who found out she was cousin to none other than Leatherface. Asked if she enjoys the amusing horror movie cred of being part of that iconic horror family, she replied, “Yeah, totally! Look, being welcomed to the Texas Chainsaw Massacre family in any way was very cool. It was a long time ago and it was a huge thing for me. I’ve had some unique roles for sure and I feel really lucky. I think it’s awesome.”

We Summon the Darkness is now available to rent or purchase on digital.