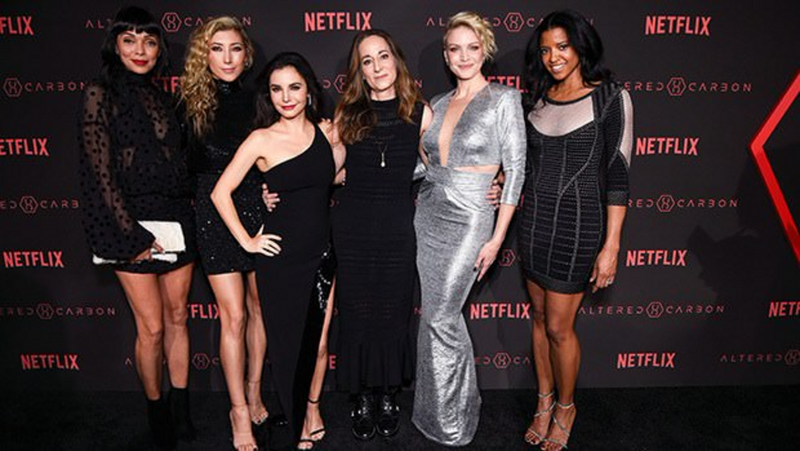 Netflix’s new cyberpunk noir series Altered Carbon premiered on Friday, telling the story of a prisoner whose consciousness is digitized and placed in a new body 250 years in the future so that he can solve a murder to win his freedom. And while the series is receiving praise for its incredible cinematography, there’s been criticism regarding sexual violence towards the female characters.

FANDOM caught up with the female leads of the series, as well as executive producer Laeta Kalogridis, at the Altered Carbon premiere in Hollywood on Thursday to get their opinions on the brewing controversy.

“It’s equal opportunity violence,” said actress Dichen Lachman. “I mean the men are getting hit by the women just as hard.”

And while the Australian actress acknowledges that violence against women is a serious problem, she thinks it’s dangerous to shy away from making people feel uncomfortable.

“I hope that art makes people take action,” she explained. “I think it’s important that we get uncomfortable. The more uncomfortable we are, the more we’ll help progress.”

Broadway star Renée Elise Goldsberry said she’s proud to play one of the strong female characters on the show.

“What I love about the storytelling coming through our showrunner Laeta Kalogridis, the person who brought this show to Netflix, is that the women are doing a whole lot of the saving in this show,” she said.

Actress Martha Higareda also credits Kalogridis with ensuring that the female characters were fleshed out and not portrayed as weak.

“Right before doing the show we had long conversations about how Laeta really had the mission to empower women and when you see the show, each and every one of the female characters is very strong,” Higareda said. “And when you read the book from Richard Morgan, Laeta expanded those characters and just made them even stronger. So I think it’s one of her biggest missions.”

Kalogridis acknowledged the chatter about the violence against women and explained that it’s no worse than what the male characters are facing.

“We are intentionally equal opportunity in terms of our violence and our nudity,” she explained at the premiere. “The absolute worst violence that’s visited on anybody is on a white male body. I burned Joel [Kinnaman]’s legs off with a blowtorch while he was awake repeatedly on the show, so there’s nothing else that is as extreme as that.”

The executive producer went on to explain that in the novel that the show is based on, Kinnaman’s character is actually inhabiting a female body when the blowtorch scene happens and they consciously changed that so that it wasn’t happening to a woman onscreen.

Kalogridis went on to say that any dystopic science fiction should be holding up a mirror to current society as a warning of what could happen if we go down the wrong path.

“I feel very strongly that we have a lot of work to do in terms of violence against women, against the disenfranchised, class violence, and the haves and have-nots aspect and the racial aspect of this is also very intentionally pushed,” she said.  “I don’t have any problem at all with the fact that that chatter is happening because when people talk about it, then it comes out and it’s discussed. It’s when people deny that it exists [that it’s a problem].

“But the most important thing is that we as a society need to change,” she added. “Human society needs to change. And that’s what the show is trying to address.”

Does it succeed? Find out by streaming Altered Carbon Season 1 on Netflix now.