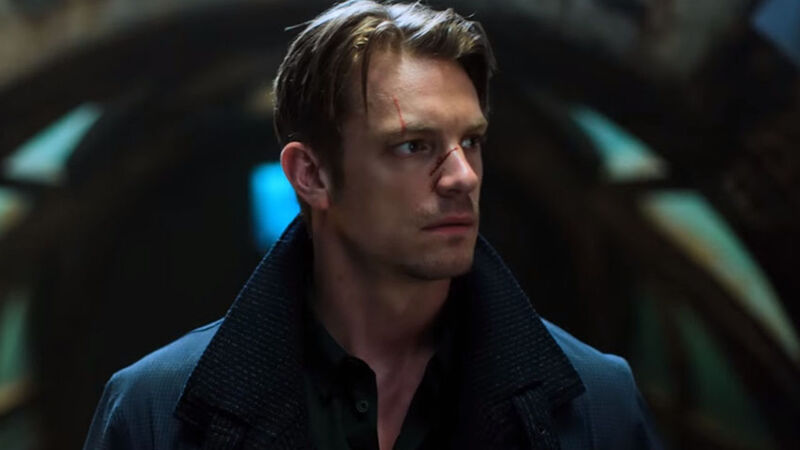 What is ‘Altered Carbon’?

Set in the distant future, Altered Carbon tells the tale of Takeshi Kovacs, a former freedom fighter awoken from supposed eternal hibernation by a rich aristocrat who wants him to solve a murder. But when he wakes up, Takeshi isn’t in his own body, while a whole bunch of people seem to be trying to kill him. And that’s just the start of his problems.

“The first thing you will learn, is nothing is what it seems.” Altered Carbon begins with these words, suggesting that the audience should trust no one, X-Files style. Which isn’t surprising, as the plot device that drives the novel on which the series is based is designed to keep the reader — and now the viewer — on their toes.

For in this dystopian future, man has found a way to cheat death, downloading consciousness to a computer chip called a ‘stack,’ then depositing it in a discarded body, nicknamed a ‘sleeve.’ Which means that the rich can effectively live forever. That the person you are talking to might not be who they claim. And that when our hero Takeshi Kovacs wakes from his 250-year slumber, he’s no longer his Japanese self on the outside, but rather a big, muscly white dude, looking a lot like Suicide Squad star Joel Kinnaman.

Explaining this central conceit takes up a good chunk of the show’s excellent — if exposition-heavy — first episode, and that’s just the start of the world-building that Altered Carbon has to do. The series explores the way in which technology dominates — and suffocates — our lives in the future. It also examines how control of that technology has made the rich richer in grand palaces above the clouds, and the poor poorer; existing at street-level in a neon-nightmare of poverty and crime.

The visuals — which look like they cost a fortune — are both arresting and effective throughout, bringing this grim future world to life in chilling and all-too-believable fashion. But while Altered Carbon looks good, it also has a central mystery that needs solving.

Kovacs is stirred from his slumber by Laurens Bancroft (James Purefoy — the best thing in Altered Carbon), who charges him with the task of solving a murder in exchange for his freedom. But there’s a twist. The murder that Bancroft wants Kovacs to solve is Bancroft’s. Seems the billionaire was shot in the head moments before a back-up of his consciousness could be made.

So while able to re-sleeve himself, Bancroft can’t remember what happened during the all-important hours before he died. Thickening the plot, only Bancroft and his wife had access to the weapon which killed him. Making them the prime suspects.

About half of Altered Carbon is concerned with Kovacs investigating this crime. And it’s by far the best material, turning the show into a neo-noir populated by femmes fatales, red herrings, and smoking guns.

Unfortunately, the series struggles when not dealing with the central mystery. Side-plots and digressions fill time but add little to proceedings, most notably a pointless episode that revolves around a brutal cage-fight. Flashbacks, dreams and visions are used to fill in blanks, but while lending the characters depth, they are much less interesting than the central whodunnit. Which all too often seems to be forgotten.

Takeshi Kovacs is an intriguing protagonist. Being an ‘envoy’ he was formerly part of “the most formidable fighting force the galaxy had ever seen.” Possessing seemingly superhuman powers of intuition, envoys were able to drop into any sleeve on any planet and be combat-ready in minutes. Meaning they could infiltrate and manipulate their opponents, making Kovacs a formidable warrior, and potentially a cracking gumshoe.

His freedom-fighting got Kovacs arrested for treason, terrorism, espionage and crimes against the state. And the more we discover about that state, the more we understand his motives. So not only should he be a great detective, but also one we respect and maybe even like.

But onscreen, in his Joel Kinnaman sleeve, there isn’t a lot to like about Kovacs. And that’s largely down to Joel Kinnaman, who plays the character with a kind of detached resignation that makes it hard to root for him. That may well make sense for the character; the world-weary Kovacs tired of waking up in foreign bodies and dismayed by the world he now inhabits.

But the actor also lacks the requisite charm and charisma to bring Kovacs to life, his interactions with the crime-fighting force he assembles — including hard-nosed cop Ortega (Martha Higareda) and comical hotelier Poe (Chris Conner) — feeling awkward and forced.

Indeed, when we meet him in flashback scenes — and the character is played by Will Yun Lee — there’s something heroic about Takeshi. But there are times when future Kovacs seems barely awake. Even when he’s carrying out heroic deeds. All of which transforms the show’s courageous central character — and our guide through this complicated world — into something of a bore.

Influences All Over the Place

Altered Carbon is a show that wears its influences on its sleeve. Everywhere you look there are nods to sci-fi classics, both visually, and in terms of the storyline. There are obvious comparisons to both the Ghost in the Shell anime and recent movie. Not just because of the parallels in terms of human augmentation. But also because of the white-washing controversy that engulfed the Scarlett Johansson film. Though in Altered Carbon the white transplant was part of the source material and does make narrative sense.

The Matrix is also an obvious influence, with multiple Altered Carbon scenes taking place in virtual reality, where characters can download knowledge and training much like those hooked up to the matrix. The TV version of Westworld also casts a shadow over proceedings, though largely in the series’ second half, the details of which we won’t spoil here.

But the sci-fi that Altered Carbon most resembles is Ridley Scott’s movie masterpiece Blade Runner. Both are rain-swept noirs that revolve around reluctant detectives. Kovacs has a similar demeanour to Deckard, and even supplies monotone narration akin to the voiceover that appeared on the original Blade Runner cut.

Story beats are similar, though, in spite of the fact that it’s told over 10 hours, Altered Carbon lacks Blade Runner‘s depth, the film questioning what it means to be human; the show touching on themes of identity and individuality — and introducing thought-provoking religious objections concerning re-sleeving — then all too quickly forgetting about them.

Visually, there are also times when they look very nearly identical. Which is no bad thing, as the effects in Blade Runner still look incredible. But these similarities also serve as a continual reminder of what can be achieved with a better script, director and actors.

Altered Carbon is good. But only when building its rich world, and dealing with the investigation of Laurens Bancroft’s death. Then it’s pretty great, journeying to some sick, twisted, and wholly unexpected places.

But frequently the show feels overstuffed, introducing too many storylines that detract from that central mystery, ricocheting back-and-forth in time in sometimes confusing fashion, and setting off on tangents that frequently don’t pay-off. It also doesn’t help that — onscreen at least — Takeshi Kovacs is far from a compelling character. Making it hard to care about his plight as proceedings progress.

All of which results in a show that kicks off in encouraging fashion, but ultimately outstays its welcome thanks to that lack of focus and momentum, too much filler, and Joel Kinnaman’s underwhelming central performance.