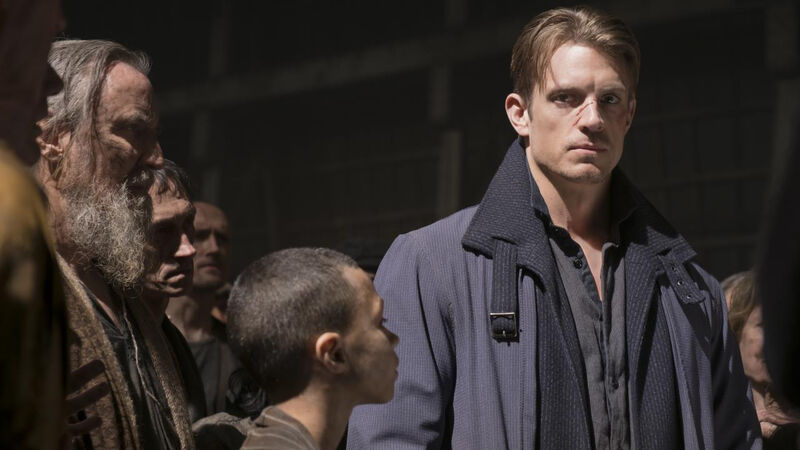 Is it Fair To Say ‘Altered Carbon’ is Guilty of Whitewashing?

Just like Hollywood’s 2017 remake of Ghost in the Shell and Matt Damon’s The Great Wall, which both came under fire for casting white actors in Asian roles, Netflix’s new sci-fi series Altered Carbon is being accused of “whitewashing.”

However, a key point of difference is in the series’ decision to stick closely to the source material. The original novel, written by Richard K. Morgan, features a main protagonist by the name of Takeshi Kovacs, who is of Japanese and Slovakian descent. But, crucially, the story revolves around a future where consciousness can be digitized and inserted into other bodies. The idea being that death is rendered a thing of the past. Once one body — or “sleeve” as they’re called — fails, it’s onto the next.

The series picks up 250 years after the original Kovacs has been killed, and we see him awaken inside the body of a white male – in the shape of Suicide Squad’s Joel Kinnaman, in fact. This is exactly how it happens in the book.

But, wouldn’t bringing this novel to the screen give the showrunner an opportunity to mount a strong response to the whitewashing row? It would certainly have been a positive move, particularly in the wake of Ed Skrein pulling out of the Hellboy reboot amid a similar whitewashing storm. Casting an Asian actor in the role of Kovacs, regardless of the source material, would have been hugely significant.

While that’s certainly the case, for showrunner Laeta Kalogridis it was clearly important to make an adaptation that’s as faithful to the novel as possible. And so she made sure to address the issue in other ways.

Kalogridis told Entertainment Weekly: “We actually expanded Kovacs’ background from what’s in the book so I could cast three other Asian actors, and they’re playing parts that are very well fleshed out. We toggle back and forth between present-day Kovacs and Kovacs of the past. One episode is entirely centered on Will Yun Lee [who plays Kovacs during his days as a mercenary].”

She went on to say: “Our show wasn’t an iconic Japanese or Asian property turned into a white property, or a real-life Asian character that was then cast with a white actor – those are the two ginormous [problems].”

Kalogridis also went into some depth about how hard she tried to integrate the character’s heritage.

“What we have is a novel that takes place in the far future, written by a Scotsman [Richard K. Morgan], in which the lead character grew up on a planet that was settled by a combination of Japanese keiretsu and Slavic people. I tried hard to take that part of his history and racial identity and anchor him in it by taking three or four sentences about his past in the book and turning them into entire episodes, or parts of episodes, and then casting them with the people who represent him in that Asian identity. Part of our story that makes it different than other stories is it hinges on the ability of people to move between bodies as if the bodies are disposable; it’s a skill Kovacs is adept at. Part of who he is is his ability to seamlessly download into another sleeve like he’s a driver of another car. But in his head – and in the book you can see this – he thinks of himself as Asian.”

Kalogridis admits that that is problematic to her show: “You can experience that in the first-person narrative in a book [in a way] that you can’t visually. In casting, I tried very hard to root his identity in his Asian childhood and his life in his Asian sleeves.”

The show’s star, Joel Kinnaman, has also spoken on the subject. He has defended the show, telling Radio Times that criticizing it for whitewashing is “lazy.”

“I think that is a little bit lazy,” he said. “You haven’t dug into the whole story if that’s how you interpret it. Whitewashing is a real thing that has been happening for a long time, and it’s quite disgraceful, in my opinion. But whitewashing is when you have an Asian character that gets played by a white person. Here, it’s an Asian character that gets put into a white body and that is the story; that’s how it is described in the book.”

The controversy surrounding Kovacs aside, the supporting cast of Altered Carbon can certainly be described is diverse. Byron Mann, Trieu Tran, and Legends of Tomorrow star Hiro Kanagawa have significant roles, alongside Nepalese-born actress Dichen Lachman. Plus, a host of other ethnicities are represented. That includes the role of Kristin Ortega, the badass cop who partners Kovacs, played by Mexican actress Martha Higareda.

What do you think? Let us know via our social channels — @getfandom. Altered Carbon is available to watch now on Netflix.