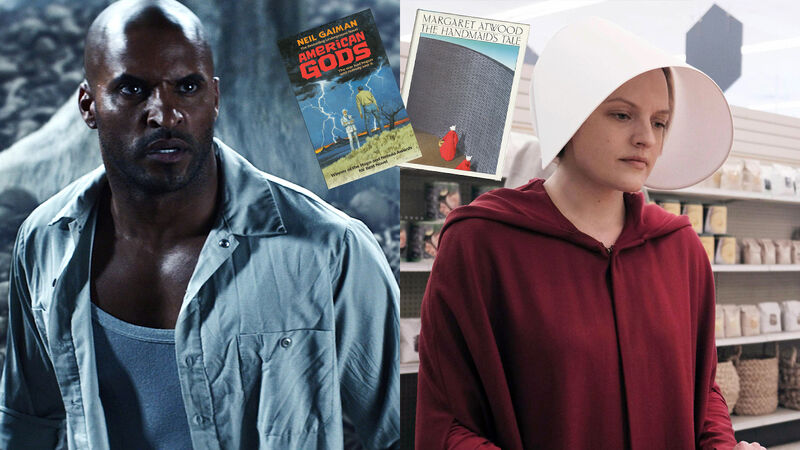 How ‘American Gods’ and ‘The Handmaid’s Tale’ Adapt Beloved Texts

Adapting a beloved text to a different media is an extraordinary task. Many literary devices don’t translate well to visual mediums, and often something that works great in a novel just doesn’t work for a film or television adaptation. This spring, two best-sellers got their time to shine on the small screen: Hulu’s The Handmaid’s Tale and STARZ’s American Gods.

The Handmaid’s Tale and American Gods are two vastly different stories, but both shows are truly fantastic adaptations. The showrunners had to make some difficult choices with regards to updating the settings, maintaining the spirit of the novels, and just how to bring these beloved tales to life.

One of the biggest challenges facing the adaptations of both The Handmaid’s Tale and American Gods was the time in which the novels were published. Margaret Atwood’s Tale was published in 1985, while Neil Gaiman’s Gods was published in 2001. Both would require a major overhaul with regards to setting, and each show did things a little differently.

Gods showrunners Bryan Fuller (Pushing Daisies, Hannibal) and Michael Green (Logan) chose to focus their updates on Technical Boy. The god of technology is presented in Gaiman’s book as an overweight, pale basement-dweller; on the show, he’s a fashion-forward British kid that vapes. It only makes sense that Technical Boy would change, given the changes in technology over the past 15 years.

Even the god of television had an update, becoming Media (X-Files’ Gillian Anderson) instead. After all, not everyone gets their TV fix in the traditional way anymore. With the rise of streaming services and cellphones, Television became Media. Anderson even has a fun line about the pervasiveness of entertainment in the series’ second episode, saying “The screen is the altar. I’m the one they sacrifice to… Now they hold a smaller screen on their lap or in the palm of their hand, so they don’t get bored watching the big one.”.

One thing that’s particularly interesting about the updates is the way it plays into the story itself. In Gods, the old gods are withering away because they are being forgotten. The new gods, including the internet, media, and more, are taking their worshippers from them. Mr. Wednesday (Ian McShane) is a bit of a technophobe, and this modern world is even more electronic than it was in 2001. Wednesday and the other old gods are even more lost in a modern adaptation. By setting the show in our current era, the showrunners actually strengthened the main themes of the novel.

Along with the basic updates, Fuller and Green also wanted to include themes that they felt would resonate with modern audiences. They created sequences to introduce each god’s “coming to America” story, and Mr. Nancy’s (Orlando Jones) allowed them to have a very “woke” moment. His opening monologue has the god appearing to slaves on a ship and telling them about the future of the black man in America. It’s the kind of scene that takes your breath away and makes Gods recognizable as more than just a fantasy story.

Handmaid’s Tale required less updating, despite its earlier publishing date. After all, in Tale, the Republic of Gilead in the former northeastern United States has purposely gone backward. In Offred’s (Elisabeth Moss) flashbacks to the time before Gilead, however, we see our own modern world. It’s a world of cellphones, internet dating, and the Twitterverse. This connection to the show’s version of the world is vital because the viewer needs to identify with the characters from the time before Gilead to better understand them in the series’ present.

One major change showrunner Bruce Miller (Eureka, The 100) decided to make was to remove the racial cleansing element from the novel. In Atwood’s book, anyone who isn’t white is executed or sent to the wastelands, so the characters are entirely WASPish. Instead, the Hulu series has a culturally diverse cast, and it’s better for it. There is enough going on in Tale with regards to gender politics that introducing racial politics as well might just be too much for most audiences.

Pacing and Expanding the Story

While Gaiman’s American Gods clocks in at nearly 230,000 words (or around 730 paperback pages), Atwood’s The Handmaid’s Tale is only 96,000 words (311 pages). This means that while Fuller and Green can take their time telling the dense story of Gods, the folks at Hulu don’t have that luxury with Tale. Fuller already plans to have three or four seasons, with the “House on the Rock” scene early in the novel not scheduled until season two.

With less text to work from, Miller had to get creative on Tale. Thankfully, Atwood’s rich worldbuilding allowed for plenty of development. Characters who we don’t get to see much of in the novel are given additional attention, in part because the viewer isn’t limited to Offred’s perspective. The novel’s frame narrative only informs the reader of things Offred directly sees or remembers, while the series dives into the perspectives of multiple characters.

The character Ofglen is important in the novel, but we never learn too much about her because of the secrecy in Gilead. In the novel, she is simply a member of the Mayday resistance and Offred’s shopping partner. In the series, the writers expanded her role. Ofglen is a former college professor and a lesbian, only forgiven for being a “gender traitor” because of her fertility. As her story progresses, Ofglen’s punishment for her sexuality is a brutal allegory for real-world sex crimes to further demonstrate the lengths those in power in Gilead will go to keep women controlled.

In addition to Ofglen, more personal history is provided for most of the other main characters as well. Serena Joy, Moira, Nick, and Luke have all been given expanded roles in the series. Each of their perspectives fleshes out Gilead a bit more.

One thing neither series has to worry about is upsetting the censors. Hulu and STARZ both have no rules with regards to content, so the adult themes explored in both novels are shown in full detail. Both shows have quite a bit of sexual content, nudity, violence, and adult language. Gods even recently had one of the most sexually explicit gay scenes in media history.

Without having to worry about censors, the showrunners have free reign to do what they want. Fuller is no longer as restricted as he was adapting Thomas Harris’ Hannibal novels for NBC, and he’s clearly having a ball making Gods as bloody and sexy as he can.

We’re about halfway done with the first seasons of both series, and neither seems to be slowing down. The shows are critically acclaimed as well as beloved by new fans and old. One thing’s for sure: decades-old novels can make for some grade-A television.