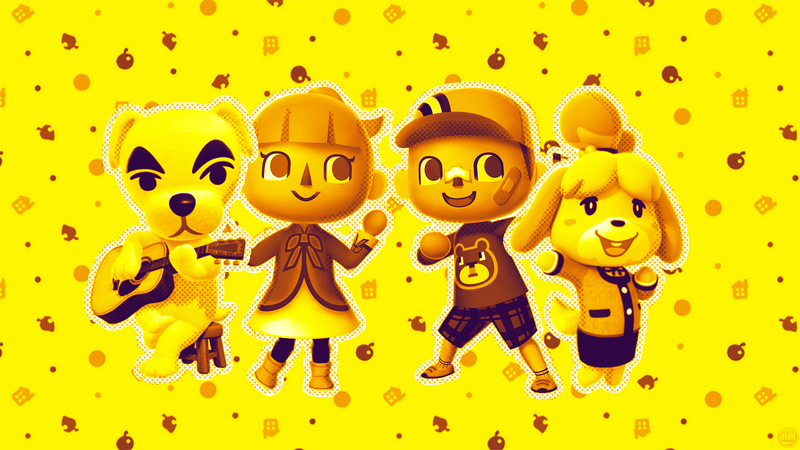 How the Adorably Wholesome Animal Crossing Community Mirrors the Games

This March, an eight-year long wait comes to an end for Animal Crossing fans as Animal Crossing: New Horizons hits shelves. The first main installment since 2012’s New Leaf, excitement is at fever pitch among villagers young and old who’re ready to start building their woodland home on Switch.

In the better part of a decade since, the community has expanded substantially amid migration from message-boards to Reddit, Fandom wikis and social media. Among all the village enthusiasts that come and go, it’s become a fervent breeding ground for artists and creators who use the animal townships to express themselves and inspire others.

“Where I first found the community, it was people that also like to draw their favorite villagers,” Quinn Blackshere, artist and illustrator, tells me. “I found through art and the love of this game, there was so much in common between people that didn’t even really know each other. And we were able to talk about and share so many things about Animal Crossing.”

Quinn began playing the series on GameCube, where the cutesy, easy-going life sim allowed her and her sister to play together. Between the relaxing atmosphere, adorable visuals, and bonding with her sibling, she became a fan for life, eventually making and selling fan-art.

She’s just co-ordinated a fan-zine, ‘Hi Neighbours: An Animal Crossing Charity Zine‘, featuring herself and a group of other artists drew their favourite Animal Crossing characters, with all proceeds going to American refugee and immigrant support center RAICES. Retailing both online and at conventions and festivals, she mentions that Animal Crossing has a certain crossover appeal, even away from fandom-related shows.

“There will still be people that pass by and will point out like ‘Oh my goodness, You have this from this game!’” she laughs. “People will be excited, like ‘You have KK Slider at this event!’, like yeah, that’s my favorite musician.”

The most friendly fandom?

This enthusiasm isn’t just bound to illustration. Fashion designer Bunni released a line of Animal Crossing-related wares this year through her company Bunni Designs, after getting requests from her audience to look into the furry critters and their colorful townships. The research made her consider moving in, the residents already there made it certain.

“I had to reach out to the community to get insight and help with the apparel designs I was creating, and I’ve been so impressed with how friendly and helpful everyone is,” she said. “There are so many people who immensely care about this game. It’s unlike any video game fandom I’ve been a part of.”

Mixing cosplay and day-to-way wear, Bunni’s apparel takes inspiration from all aspects of the game’s aesthetic, from loading screens and backgrounds to specific costumes and so on. Drawing from the fresh looks that’ll be available in New Horizons has created some prominent fore-runners.

“The shirts based off Tom Nook and Isabelle’s island-themed outfits from the new game have been the best-sellers so far,” she says, adding that Animal Crossing fans distinctly echo her body-positive ethos. “I see a lot of cosplayers uplifting other Animal Crossing cosplayers of all shapes and sizes and genders.”

As we get closer and closer to the arrival of New Horizons, updates are becoming more and more exciting. Youtube creator CrossingChannel tells me his news videos are now comfortably the most popular posts on his channel, out-shining explainers, Let’s Plays and other content. Starting on Youtube back in 2013, CrossingChannel wanted to contribute to what was a lacking amount of Animal Crossing videos.

He’s now one of the foremost voices on happenings with Tom Nook and co., and credits the malleability of the games for his success.

“It’s very personal to each player, so my experiences with the game are pretty unique, even if some aspects can be shared and are relatable for my viewers,” He explains. “The fact this series allows you to really express yourself as a person has helped people connect with what I do, and it keeps it exciting for me to see so many people invested in my videos.”

As much is a large part of why there’s so much creativity within Animal Crossing-associated spaces. People are inspired by the simplicity, and want to make their love of gathering bells and keeping up with Bob even more personal.

“It’s such a fun style to experiment in. I’ve seen countless people, including myself, designing their own villagers and drawing caricatures of each other in the game’s style,” Naomi ‘Jekyll’ Noodle, artist and illustrator, tells me. “On the flip side, there’s also the fun aspect of drawing the characters in a more realistic way. There’s a lot to play with.”

Naomi mentions loving to draw monsters like Deathclaws from Fallout, or the Mothman, in Animal Crossing’s aesthetic as a way of demonstrating the series’ laid back nature. The clean, straight-forward shapes and colors make it ideal for artists looking to experiment, agrees Quinn, who adds it’s not the worst method for someone looking to get eyes on their work, either.

“I find it’s a very accepting community. It’s very easy to make your own original characters, or turn your pets into these Animal Crossing-type characters,” Quinn says. “It creates a lot of possibilities and creates an easy way to get other people excited about your artwork.”

Of course, New Horizons isn’t the only entry since New Leaf. We had Amiibo Festival for the Wii U in 2015, and Pocket Camp for mobile in 2017. Although the consensus among my subjects is that Animal Crossing fans generally stay enthused and positive, they all agree these can be touchy subjects, especially the former.

“I think the only time people have been truly negative towards the series was around when Amiibo Festival came out,” Robyn Parkinson, an admin on the Animal Crossing wiki, says. “People were very disappointed.”

Working on the wiki since the late 2000s, Robyn has watched Animal Crossing go from having a few scattered forums to a subreddit with nearly 350,000 members and numerous groups besides. As the fandom has morphed and expanded, she believes that the central concept of living in a twee village with your animal friends has helped stave off negativity. To her, Pocket Camp was a smart stop-gap that’s helped ingratiate newcomers before the intensity of a full release.

“I lived with a girl two years ago and she had never heard of Animal Crossing until Pocket Camp came out and she started playing it,” Robyn recalls. “When she found out I was a person doing the admin on the wiki, she started showing me her pocket countdown every few days. She would not have been the kind of person to pick up a Nintendo DS.”

Naturally, interest right now is at a high-point as everyone gets ready to explore New Horizons, but what’s more appealing is seeing what will start coming out from it in six months, two years, or a decade from now. Animal Crossing’s unique, Nintendo-infused take on the “social simulator” tends to bring out good in those who visit its tranquil marshes and streets, giving them something they can rely on whenever they need a pick-me-up.

“Since the games have no end, people are still playing their Wild World saves from ten years ago. These games go on forever and it’s beautiful,” Naomi says. “There’s no real goal. There’s always a new resident moving in, there’s always a day when you decide to remodel your home.”

Given it’s the first to come out to a truly online fanbase, there is a lingering question over what role Nintendo will take in stimulating the player-base going forward. CrossingChannel hopes the company listens to what players are asking for in updates, Quinn and Naomi reckon the developers could do more to platform fan-art on social media, and Bunni suggests some sort of official convention would help drive interest. Regardless of what Nintendo does, the magic of Animal Crossing will always come down to one thing. “Animal Crossing has kept its nice nature by the fact that it is nice and attracts nice people,” Robyn says.