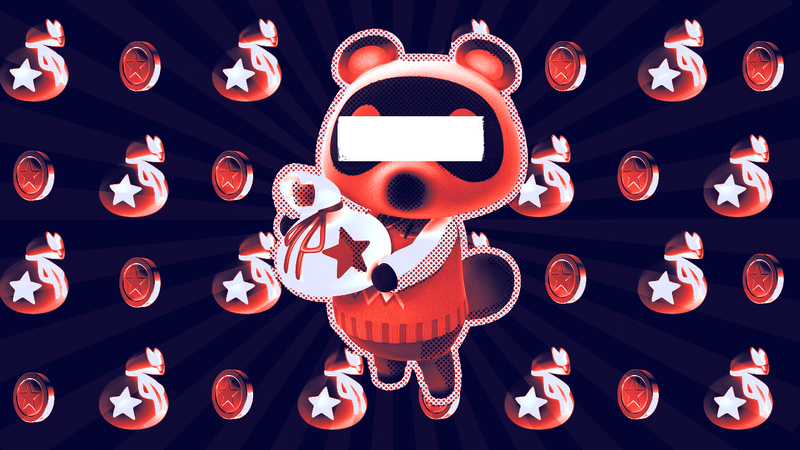 The Dark Truth About Animal Crossing

Since the release of the first Animal Crossing on the Nintendo 64/GameCube way back in 2001, Katsuya Eguchi’s beloved, open-ended, social simulation game has been lauded for being a peaceful space where players can connect with one another and create experiences that are tranquil and…

You what? Animal Crossing is none of these things. Let us tell you what Animal Crossing is. It is the most messed up, dystopian hellscape Ninty have ever put their name to; full of cannibals, mutants, inappropriate sea turtles, ghosts, tax barons, massive testicles and some weird religious stuff that we’ve just thought about that’s really freaked us out.

With the latest game in the series, Animal Crossing: New Horizons, due on the Switch this March 20th, we thought we’d take a scalpel and cut open this beguiling monster, pulling its diseased heart out and raising it towards the sun. What follows are five reasons why the Animal Crossing series should be locked in a stony tomb and forgotten about, forever…

IT’S A GAME THAT REVOLVES AROUND A BIN DWELLING LANDBARRON

The first character you meet when you boot up Animal Crossing is Tom Nook. He looks nice. He is, after all, a racoon, and aren’t racoons adorable? That’ll be racoons who are the U.S.A’s biggest carrier of rabies; according to the Center for Disease Control, the masked bandits account for 28.6% of all animal rabies reports. Or ask the 82-year-old New Jersey man who, just last September, was left with gaping wounds in his back, legs and arms after a racoon attacked him while he was sitting in his yard. No, take our word for it. Tom Nook is a total dick.

It’s never explained how Nook came to be Animal Crossing’s sole trader, but we can bet you that broken windows and intimidation played a part. There are serious Mafioso vibes at play here. First, he offers you a home – unfurnished, obviously – putting you in debt from the moment you start the game. Then he’ll offer to sell you furniture – for an inflated price – but to get it you’ll have to deal with Timmy and Tommy, two-child raccoons, the relationship of which to Tom is never established.

Child labour was abolished in the UK in 1933. In Animal Crossing the fight goes on. And think about all those packages you’re asked to deliver in the game, no questions ask. This guy is running a racket. Can we mention the widely held belief that Tom Nook isn’t a racoon at all – but a human in a racoon suit?

“We think he is very misunderstood,” one of the game’s two directors, Aya Kyogoku, told Kotaku back in 2013. “He’s just passionate about his business. He’s not like a loan shark. He doesn’t add a handling fee or anything like that. He can wait as long as it takes for you to pay back. He’s not as bad as other people might think he is…” Note that in early Animal Crossing games Tom will ‘joke’ about sending some cousins of his to see you if you haven’t made a down-payment on your house in a while. Nintendo has actually worked to make the character less aggressive in recent years.

Incidentally, Tom isn’t based on any regular racoon, but the Japanese Tanuki racoon dog. In Japanese folklore said creature is depicted as a shapeshifter, a prankster – and is known for having massive, magical testicles (maybe the answer as to why Mario can put on a Tanuki suit and fly in Super Mario 3 has finally been found). Just think of that next time you turn over all your hard-earned bells to the Nookster.

IT’S NOT JUST A GAME. IT’S A CAPITALIST FANTASY

2017’s iOS/Android game Animal Crossing: Pocket Camp is a fun bite-sized appropriation of the series bigger games. It’s also the perfect microcosm of the fragility of friendship. Here you make friends by doing things for them, always being rewarded with goods or cash. Nobody ever just wants to hang out.

And of course, just like in the real world, cash is king. You can get a jump on your progress in the game via the digital leprosy that is microtransactions. And who is running said online trading post? Tom Nook, obviously, who is depicted lying in a bath of banknotes, like he’s f***ing Tupac. Oh, we should note that you can literally buy him – like the greediest of Comic-Con alumni, 250 leaf tickets and he’s all yours.

But Animal Crossing has never been shy about showcasing its capitalist ideals. This is, after all, a game where resources aren’t limited and are never in decline. Running short on cash? Go chop down a forest and sell the lumber (and while we’re on an environmental tip, what kind of fertilizer peppers this land’s soil – these trees grow back in days!). Hungry? Why not empty the ocean of fish; eat them yourself or sell them on, there are no fishing quotas here!

As you read this, in the real world, the earth finds itself in the grip of a climate emergency. And yet, if we carried on like the inhabitants of Animal Crossing do, then… well, look out for Nintendo’s forthcoming Mad Max/Animal Crossing crossover forthwith.

IT’S A GAME WITH TERRIFYING POSIBILITES FOR EVOLUTION

It is Russia. The year is 1920-something. And the controversial scientist Ilya Ivanovich Ivanov has just impregnated three female chimpanzees with human sperm. His aim? To create the world’s first human-chimp hybrid, the ‘Humanzee’. He fails. Is banished to exile in the Kazakh, SSR. Then in 1932 he dies of a stroke, his crazed vision unfulfilled. Hey, everyone needs a hobby.

And the relevance of this to Animal Crossing is? Well, think about it. This is a game filled with many different types of animals – and just one human. Who will keep you warm on cold, wintery nights? It’s only human to want to be loved…

While we’re at it, what’s the deal with Stitches, the game’s nightmarish stitched together teddy bear? Or Sprocket (who we think is a robotic ostrich)? Or Ribbot (a robotic frog)? Or, God forbid, Hopkins – an inflatable rabbit! More so, dare we even consider how these unnatural creations came to be?

IT’S A GAME THAT DOESN’T KNOW WHETHER TO BE FRIENDS WITH ANIMALS. OR EAT THEM

It’s a conundrum that’s plagued humanity from the very moment someone drew a cute anthropomorphic chicken. We speak of course, of the uneasy relationship between wanting cute animal motifs in our lives – and tasty animal meat on our plate. This is a problem that bothers the Animal Crossing verse, also. This is a world where nature’s apex predators, creatures like wolf and bear, live peacefully with rabbits and deer.

But why, pray tell, are some animals anthropomorphised and some not? This is a game in which you can keep a caged bird – and invite a bigger bird over for tea. Where you can eat a squid – and share it with your octopus neighbour. AND NOBODY GIVES A S**T! EVERYONE JUST THINKS THIS IS NORMAL! None of this is quite as dystopian as those real-world animatronic pigs who chop sausages in the window of high street butchers – but it runs them close.

We sort of want to talk about Chadder, a character in the game who appears to be a mouse, only made out of cheese – but frankly, we’re exhausted.

THIS IS A SERIES WITH CREEPYNESS AT ITS VERY CORE

You barely have to look for creepiness in Animal Crossing; it’s there everywhere you look. Explain the character Coco to us, a character who appears to be a rabbit – only wrapped tightly in bandages, a bit like some horrifically disfigured burns victim – with coal-black holes for eyes and a mouth, meaning her head looks not unlike a mask one of Slipknot might have worn back in the days when they didn’t write wimpy ballads.

Let’s not dwell on Mr. Resetti; a character that creeped so many younger players out with his agitated guilt trips about resetting the game, that Nintendo responded to the huge amount of complaints from player’s parents and reworked the character.

Consider the strangeness of many of the villager’s utterances. There’s Pierce the eagle and his request for the player to bring him a skeleton. Sea turtle Kapp’n and his observations on the smell of your hair or uncomfortably direct inquiries about your relationship status – all whilst trapped on his boat in the middle of the ocean (sample quote: “you look a touch queasy, do I scare you me lass?)!

But perhaps strangest of all is Annabelle’s fourth-wall breaking retelling of her dream during the DS era, “where a giant, disembodied hand keeps poking me with a stylus.” Wait, is this how Jim Carrey felt in The Truman Show?

If both Easter (renamed Bunny Day) and Christmas (that’ll be Toy Day) exist in the world of Animal Crossing, does that mean… Jesus does? Does that mean Satan does? And what about other religious deities? Is Margie the elephant actually Ganesha? Is Kyle the wolf in fact Anubis? Are we being too blasphemous yet? Or is this whole thing some kind of Jamestown cult, with Tom Nook at the heart of it? Last we checked; Tom’s store Nook’s Cranny was all out of Kool Aid.

It feels excessive to even mention that Animal Crossing has a character in it who is actually a ghost (actually a wisp, named – um – ‘Wisp’). She only appears, at between 12pm and 4am. Sure. That’s not creepy. Nope. Not at all.