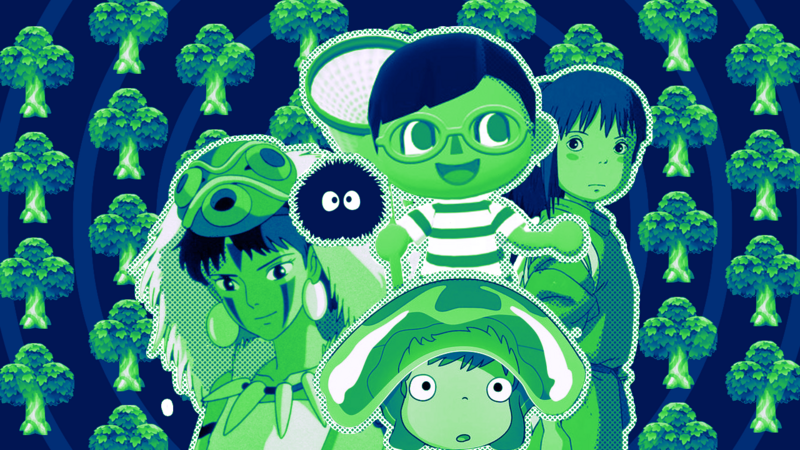 Since Dobutsu no Mori gently strolled onto the N64 in 2001, the Animal Crossing series has become every self-respecting Nintendo fan’s darling for rest and recuperation. Unfortunately, though, the last few years have been tough for those who love Nintendo’s fluffiest animals. Though spin-off games like Happy Home Designer and Pocket Camp have managed to tide us over since the release of New Leaf  in 2013, Animal Crossing fans have now waited seven long years for a true mainline sequel. Thankfully, that wait is almost over — with just days (!) to go until the arrival of New Horizons on Switch.

In the meantime, we’ve been turning to our love of film to scratch that Animal Crossing itch. If the wait until launch is too much to bear, then luckily for you, these games are essentially the interactive equivalent of beloved Studio Ghibli films like My Neighbor Totoro and Only Yesterday. Dig a little deeper, and the similarities in aesthetics and theme reveal a wonderful shared philosophy between the two – so read on to find out why you should get cozy, turn on the TV and enjoy the next best thing to running your very own virtual village.

From the outset, obvious comparisons can be drawn between the leafy aesthetics of Ghibli and the Animal Crossing games. Though City Folk on Wii introduced a whole new urban dimension to Animal Crossing, and Ghibli movies like Kiki’s Delivery Service and Whisper of the Heart take place in the bright lights of the city, each tends to remain in the soft glow of the countryside.

Where Ghibli tends towards a more vibrant version of realism in its matte painted backgrounds and creature designs, Animal Crossing concentrates nature into simple designs that make up every part of its iconography, including the lightly nibbled green leaf that represents the franchise.

This sense of calm extends to their soundtracks, too, with both being popular choices for 3+ hour YouTube videos designed to be put on for a chilled out atmosphere while studying, napping or writing (we may have listened to one when proofreading this very article). Landing somewhere between cutesy and rustic, it’s a style akin to a cosy jumper and a cup of hot chocolate, or watching the cherry blossom fall in March.

Of course, both were also established and continue to be made in Japan, which has had a notable impact on their imagery and philosophy. For one, both have prominently used Japanese creatures like tanukis (raccoon dogs): the film Pom Poko is based entirely around their folkloric abilities, while Tom Nook has become one of the best-known residents of everyone’s Animal Crossing town.

Many of the holidays and events celebrated in the GameCube iteration of Animal Crossing are taken directly from Japanese culture: the cherry blossom festival corresponds with the falling of Sakura petals, while the morning exercises throughout summer stem from the more recent Japanese tradition of radio calisthenics.

Other ties to Japanese culture like Shintoist Kami worship are present in many Ghibli films too: the spirits that make up the bathhouse in Spirited Away are grounded in this concept, as are the soot sprites that appear in My Neighbor Totoro and the Kodama of Princess Mononoke. Though they utilise similar and differing traditions, both Animal Crossing and Studio Ghibli are steeped in the same proud national history, and aren’t afraid to express it to a worldwide audience.

Much like IPs such as Stardew Valley and Harvest Moon, Animal Crossing relies on the routines of domestic life in both look and gameplay. Sure, you can put your hard-earned bells towards a grander purpose like a house upgrade or a new store, but why not chip in 200 for a sit down and a coffee? Or ignore the monetary system altogether and just enjoy eating a nice ripe peach?

Neither of these actions will impact the game in any meaningful or lasting way, but that isn’t the point – what matters is that, in the moment, you’re at peace. For me, this feels exactly like the low-key, entirely unnecessary moments that are peppered in almost every Studio Ghibli film.

The ramen enjoyed in Ponyo isn’t the key to unlocking another secret of the film, and the Yamadas losing their daughter in the supermarket at the start of My Neighbors the Yamadas doesn’t kick off some grand search and rescue mission. Like in life, things are allowed to happen without purpose, and while the simulation game genre as a whole may touch on this, Animal Crossing embraces it wholeheartedly.

As a result of this focus on the domestic, Animal Crossing isn’t a series with perma-death or an expert mode – the stakes remain pretty much as low as they can get. Cockroaches can be squished, a bee sting is cured for the low price of 400 bells, and Mr. Resetti will always stop lecturing you on the importance of saving eventually.

You may become frustrated if Nook’s Cranny isn’t stocked with a shovel in the early game, or if you accidentally answer Harriet the poodle’s questions in a way that leaves you with that odd three-pigtail hairdo, but ultimately, you can just wait it out and try again tomorrow. You set your own goals for the sake of your own contentment, and this is reflected in the low stakes of many popular Ghibli films.

While some ramp up the danger, like Princess Mononoke and Howl’s Moving Castle, most are content with focusing on the outcomes of personal dramas, the goal being contentment rather than survival. Shizuku isn’t fighting dragons in Whisper of the Heart; she’s just trying to write a good story and follow her passion. Even Chihiro’s rescue of her parents in Spirited Away seems to be more about her internal maturation than the external obstacles she faces.

Throughout the series, and perhaps to a new extreme with New Horizons, Animal Crossing has been a series that subtly weaves prescient themes of environmentalism into everything you do. Much of the success of your town is built upon your ability to sustainably generate bells: you turn one tree into four and sell furniture you no longer need to other villagers.

Decimating the village’s resources (though essentially impossible in terms of fossils and fish, perhaps a more escapist part of the series) won’t get you far, and won’t transform your town into the beautiful utopia it’s capable of becoming; instead, you have to respect the world around you. Hayao Miyazaki, the most well-known Ghibli director, is well known for the explicit environmentalism in his movies.

Nausicaa of the Valley of the Wind, one of his earliest features, is about the consequences of nuclear war and human destruction on the environment, and Pom Poko looks at the effects of modernisation from the perspective of the creatures whose home it destroys. In most popular games and films, excitement comes from watching violent wars and exploding buildings – for Animal Crossing and Ghibli, the joy lies in preserving the beauty of nature, not destroying it.

There are, of course, some superficial differences between the two because of their differing mediums: 2D vs 3D visuals, linear narrative vs building your own story, standalone films vs recurring narratives and mechanics. But overall, these two IPs share a core – one that values compassion, the natural world, and the beauty of the everyday.

Ni No Kuni may feature art from Studio Ghibli, and you can always watch the oddly obscure Animal Crossing animated film, but honestly, I think that despite being from two entirely different companies and creators, the Animal Crossing games and the Studio Ghibli films have more in common than even the respective studios attempts at making something beyond their usual medium.

So, to bide time between now and March 20th, my recommendation is to curl up, My Neighbor Totoro, and relax into a world that seems wonderfully familiar.

Zoe Crombie
ZoeCrombie
Film writer who can be found lurking on film sites from across the world. Three main loves: Studio Ghibli, the Marx Brothers, and camp body horror.