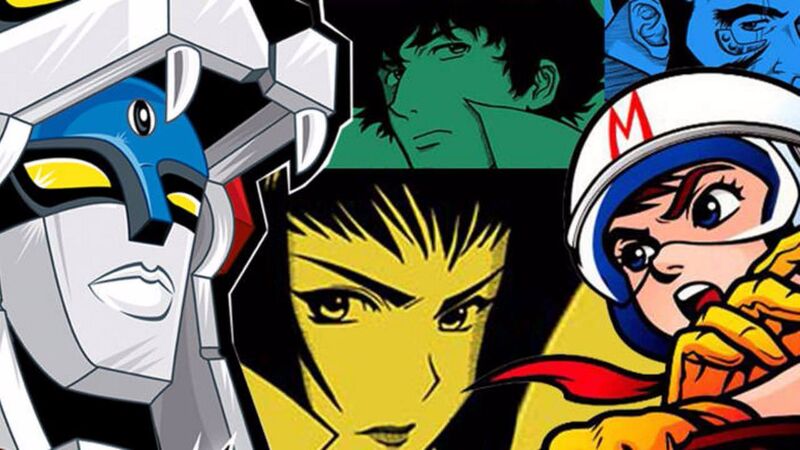 The History of Anime’s Journey to America

Anime has taken the world by storm. The abundance of shows and films is matched only by how easy it is to watch your favorite anime. But, how did this export from Japan become such a huge phenomenon in America? Which shows and films paved the way for anime to become the empire it is today?

Anime took off in both Japan and America around the same time. While animated shows had already found some popularity in Japan, the first major hit that made its way to the USA was Osamu Tezuka’s Astro Boy (known as Mighty Atom in Japan). The show premiered in Japan on January 1, 1963. In September of that year, NBC began showing an English adaptation of the series that was produced by Fred Ladd.

The success of Astro Boy led to a surge of anime shows being repurposed for American audiences. Fred Ladd also adapted another of Tezuka’s works, Kimba the White Lion, in 1966. Many have cited Kimba and its success as a potentially unintended inspiration for Disney’s The Lion King.

Another series that Ladd reconfigured for American audiences was Gigantor (Tetsujin 28-go in Japan). Gigantor hit American screens only a year after Astro Boy and found success with younger viewers. Much like Kimba, the adapted anime series inspired the next generation of Western animators and storytellers with fans pointing out that the popular film The Iron Giant is a clear tribute to Gigantor.

The final big anime hit of the ’60s in America was Speed Racer in 1967. Producer Peter Fernandez, who had ghost-written American scripts for Astro Boy and Gigantor, took over adaptation duties and provided a number of voices for the characters.

Throughout all of these adaptations, a pattern of recontextualization emerged. Character names were changed and certain pieces of content were either altered or removed due to American audiences’ sensitivity to violent or suggestive content. This was a standard practice for most anime series as they made their way overseas and it was a practice that wouldn’t change for quite some time.

After the surge of anime properties that hit U.S. shores in the 1960s, once the ’70s rolled around, the craze seemed to quieten. However, the ’70s produced two very important shows that did make their way to America. These shows would foreshadow the enormous anime boom of the 1980s.

Star Blazers (Space Battleship Yamato in Japan) originally had a limited release as Space Cruiser in 1978. Eventually, the series was picked up again and retitled Star Blazers. It premiered in the San Francisco Bay Area in 1979 and achieved a strong following. Many fans credit it with starting their interest in anime.

This was especially important since Star Blazers didn’t sanitize as much of its material as former American adaptations of anime had done. Though references to alcohol and coarse language were removed, much of the original show’s plot and character development were left intact. This led to Star Blazers being a much more mature show compared to other anime adaptations of the time. It also had a serialized story and continuing arcs which were rare — if not completely abandoned — for American anime adaptations.

The other seminal anime series for American audiences of the ’70s was Battle of the Planets (Science Ninja Team Gatchaman in Japan). The superhero/sci-fi series was immensely popular and was re-adapted in the 1980s as G-Force. However, fans of the property see that version as inferior to both the original Japanese version and the American adaptation.

Of course, all of this interest in space fiction was brought about by the gargantuan success of Star Wars in 1977. Japan had already been enamored with science-fiction but Star Wars kicked their love for sci-fi into high gear just before the 1980s. It’s in that decade where the art form of anime would begin to truly come into its own.

The 1980s would become the golden age of anime as clear fandoms for the art form began to arise. In Japan, the otaku subculture started to grow. Meanwhile, American audiences were being exposed to even more elaborate and higher quality adaptations of anime thanks to improved home video technology.

These shows would mostly arise thanks to imported VHS copies of anime films and television shows. “Fansubs” became immensely popular with older fans. These were recordings of anime shows that were later subtitled independently by individuals or small collectives of fans. It helped to broaden the amount of content making its way to American eyes.

But, when it came to more mainstream fare, the biggest and most influential show was Robotech. The show was an amalgamation of three unrelated shows — Super Dimension Fortress Macross, Super Dimension Cavalry Southern Cross, and Genesis Climber Mospeada — that U.S. company Harmony Gold cut together and readapted into a brand new series.

Robotech is still praised for its adult approach, strong storylines, and compelling characters. It helped widen the American fandoms of anime and showcase that these weren’t just cartoons for distracted kids.

The decade produced several other major successes that were aimed at younger audiences. One of the most notable was Voltron: Defender of the Universe. Adapted from two anime series — Beast King GoLion and Armored Fleet Dairugger XV — the show would pave the way for other mecha and sentai shows like Mighty Morphin’ Power Rangers. And seeing that the new Netflix show Voltron: Legendary Defender is still going strong, it’s clear that Voltron‘s influence was an integral one.

The big advancement in anime during this period, however, was happening in feature films. Anime movies in Japan were taking off and the ones that made their way to America changed the game. Hayao Miyazaki was coming into his prime, though his big film, 1984’s Nausicaä of the Valley of the Wind, would first see distribution in the states as a heavily edited version called Warriors of the Wind. Slowly but surely, anime films were making their impact on Western audiences.

The biggest of these was Katsuhiro Otomo’s Akira in 1988. It was a financial disappointment in its homeland, but it had an enormous effect on American audiences and their appraisal of Japanese animated features. The dark, violent, and thoroughly mature subject matter resonated with the burgeoning Gen-X culture that would make its way into the 1990s. And it’s in this decade that anime would explode and become a worldwide phenomenon.

The 1990s – Anime Hits the Mainstream

It’s impossible to catalog the numerous series and films that made their way overseas in the 1990s. Anime was a fertile market for American distributors whose only production costs involved re-recording/rewriting dialogue as well as editing content and timing. Many television stations like the Sci-Fi Channel and Cartoon Network would run anime shows in specialized blocks aimed at older children and teenagers. Of these, Cartoon Network’s Toonami was the most influential in bringing several action-oriented anime shows to the widest possible audience.

The 1990s also provided Americans with their biggest anime cultural effects. Shows like Sailor Moon, Dragon Ball Z, and Gundam Wing were not only big hits in Japan but in America as well. The influx of other elements of Japanese pop culture began to take hold. The largest of these was Pokémon which was not only an anime series but also featured a video game and card game component.

In the realm of film, anime was breaching into the mainstream like never before. While movies like Ghost in the Shell remained beloved by anime fans, it also went on the be a huge inspiration for The Matrix, one of the highest grossing films of the 1990s. Miyazaki’s films began to be even more widely accepted, with Princess Mononoke becoming the most expensive animated production ever made at the time.

All the while you had distributors like Pioneer, Funimation, and Manga Video constantly putting out content that showcased the diversity of anime. The most striking of these was Neon Genesis Evangelion which shattered Western expectations for the mecha genre. To this day, many fans cite Neon Genesis Evangelion as the anime that made them grow up and realize that these cartoons weren’t just for kids.

And when the 2000s rolled around, it was clear that anime was going to be everything for everybody.

By the early and mid-2000s, anime had broken into American homes and was here to stay. Cartoon Network introduced their Adult Swim block and programmed a lot of anime series that American audiences had not been introduced to. A standout from this era was Cowboy Bebop, a short anime series that is often cited as one of the best anime shows of all time.

As the internet and digital distribution began to explode, fans found it even easier to get a hold of original Japanese versions of their favorite anime shows and films. The influx was incalculable as distributors were being held to task for providing accurate adaptations of these shows.

And by today, anime is a multi-million dollar industry that shows no sign of stopping. There are streaming services that cater specifically to anime shows and releases from Japan. Fan conventions are full of cosplayers dressing up as their favorite anime characters. And the mainstream acceptance of the medium is at an all-time high.

Anime is here to stay. Its journey from Japan to America is a long and storied one, and it will continue to affect American culture in immeasurable ways.