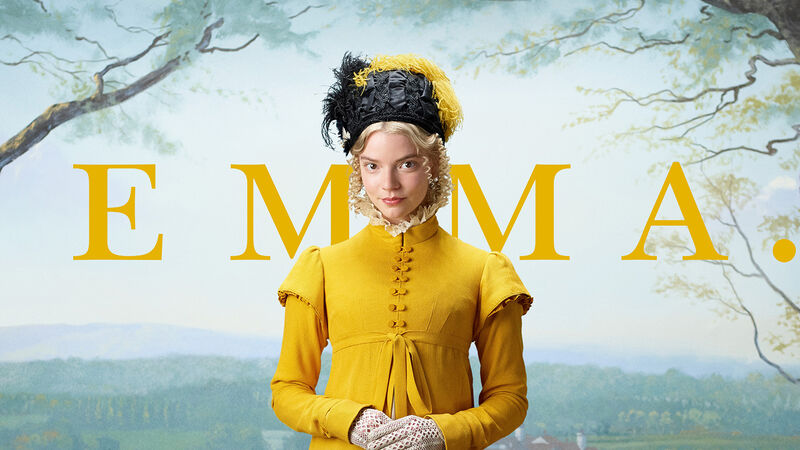 Opening back in February to very strong reviews, the theatrical release of Emma — or Emma., with a period, going by the film’s proper title — was cut short, as all movie theaters were forced to close during the outbreak of Covid-19. Fortunately though, there was a quick chance for more to see the funny and highly engaging adaptation of Jane Austen’s novel via the film’s Digital release and now, as of this week, it is available on Blu-ray and DVD as well.

Anya Taylor-Joy (The Witch, Split, The New Mutants) gives an excellent performance as the title character, a 21-year-old living in the early 1800s who is savvy and quick-witted — and described by Austen herself as “handsome, clever, and rich” — but who has a lot to learn when it comes to meddling in the lives of others.

With the Blu-ray release of Emma here, I spoke to Taylor-Joy about the film, resonating with potential viewers who may be wary of costume dramas, and more, including connecting to a certain beloved, previously made and contemporary-set adaptation of Emma starring Alicia Silverstone and Paul Rudd…

Regarding Taylor-Joy’s own history with the original Emma novel, she recalled, “When I first moved over to England, I kind of made it my mission to read as much English stuff as I possibly could, just because I was such a fish out of water. I read Emma when I was quite young and didn’t really understand it and then revisited it when I was older and loved it.”

While Emma has been adapted several times before, Taylor-Joy noted that for her, like many, “The movie version that I grew up with was Clueless, which is such a brilliant film. And it’s the only film I could really watch whilst I was making Emma because Cher is removed enough from my version that I could enjoy it without comparing her [to what I was doing].”

Taylor-Joy said Clueless, which famously moved the entire story to 1990s Los Angeles, helped reinforce how much Austen’s stories are still relatable, remarking, “I think Jane Austen is such a brilliant satirist and she creates a story that really works well in any situation when you have a whole group of people that are just on top of each other all of the time. Whether that’s high school or it’s the office, everyone has that story of the best friend that they should’ve kissed or the other best friend that, you know, maybe they’re a bit too controlling to you. Or how gossip can run away from you and all of a sudden you realize that you’re in a completely different situation than you thought you were. I just think it’s very relatable.”

There are some who seem to have an aversion to “costume dramas” in general (though it’s worth noting Emma is a comedy at its heart). Said Taylor-Joy, “I think that there’s this weird notion… I understand where it comes from, but it’s so strange. It’s like, people see period dramas as such a long time ago that it’s almost science fiction. People forget that they were just normal human beings that were trying to adhere to a set of rules that weren’t necessarily the most human, if that makes sense? And having characters that have bodily functions and who don’t necessarily seem all that comfortable with those rules, I think that helps [connect the audience] quite a bit.”

Taylor-Joy knows one thing that may make Emma seem a bit odd for some is something as simple as the corsets and period costumes, but noted in this version, “Even the clothes have been made to feel more modern.”

There are some really eye-catching, bold costumes in the film, designed by Alexandra Byrne (Thor, Guardians of the Galaxy, Doctor Strange) and Taylor-Joy noted, “It was incredible because I’ve never been such a part of the process of getting to pick wardrobe. [Director] Autumn de Wilde was wonderful because she really admired Alexandra Byrne, who’s just, like, an absolute rock star. And I had a lot of time for the fittings I must have had like 20 hours or something of me standing up like a doll while clothes were made on me. It was such a privilege but it also really gave me something to work with as the character because we decided early on that Emma was going to have a wardrobe, so things would be repeated, but that she really dressed for whatever occasion she was going into.”

Taylor-Joy added, with a laugh, “When you are playing a character who is so aware of what they are wearing, you get introduced into ‘clothes acting.’ If you’re wearing a coat with a spectacular back, you suddenly find yourself delivering your lines over your shoulder because you’re like, ‘Emma wants to show you this back. I’m just gonna show it to this camera and deliver my lines that way!’

Taylor-Joy also spoke about how one thing that helps Emma feel relatable are the small moments seeing her when she’s more relaxed and not feeling the need to speak (or stand) in a certain way, whether it’s her humorously warming her backside by a fire or relaxing in a window with her legs propped up.

“We have a couple of moments like that,” Taylor-Joy noted. “There’s a whole sequence where it’s just Emma sitting with her hair down and putting her hands almost on her face. This is a moment where she’s not presenting in company, so there aren’t any other people around.” Despite the era, Taylor-Joy stressed, “She’s still just a 21-year-old that’s just been out dancing all night and had a confusing moment with a boy she didn’t think she likes but all of a sudden can’t stop thinking about.”

Emma may live centuries in the past, but Taylor-Joy said it was easy to connect to her in this manner, asking, “What are you like when you come in from the nightclub, at whatever time in the morning, and you’re tired but you’re just thinking about everything that has just gone down? And it’s really lovely to have moments like that because I think people, in those times, were really forced to grow up quite quickly. And a big part of the allure of Emma is that Emma is playing mistress of the house before actually understanding what that is and how to treat people. You know, she’s just a young human being. So I loved those moments, I really treasured them.”

One of the film’s most important moments is when Emma, without thinking, makes a quick yet incredibly impactful insult at the expense of the kindly Mrs. Bates (Miranda Hart).

When it came to filming that scene, Taylor-Joy recalled, “Autumn had really made it clear to us that unless the Box Hill scene worked, the movie wasn’t going to work. So I think we all showed up that day – it’s an absolutely beautiful setting – aware that this was really important and we had to take time to get it right. We did it in a lot of different ways. Autumn was a fan, and I loved this, she would start rolling and then just yell direction at me, essentially, and then it was on me to simulate and give a new and a different type of performance. I loved it because it’s kind of like seeing how quickly your brain can work and how quickly you can simulate that information and really come up with something surprising. I think the toughest bit was that we all really liked each other, like really liked each other, so being on the receiving end of the look that Miranda gives after that line is heartbreaking and really helpful. But there were definitely lots of hugs in between scenes and takes to say, ‘Hi, I’m sorry I was so mean! I didn’t mean it!’

Emma becomes a better person by the end of the story, but she doesn’t have a big speech about it – nor does she directly apologize for her earlier actions. Taylor-Joy felt that was important, saying, “There was definitely an ongoing joke between Autumn and I that every time Emma messes up she just creates a picnic basket with a bedspread in it and presents it. She’s just like, ‘I’m really good at presenting things!’ I actually think it’s quite sweet, but she’s not the best at admitting when she’s wrong. I think it would be weird if Emma suddenly started going, ‘Gee, here’s all the things that I’ve learned.’ Because it’s important that Emma isn’t The Taming of the Shrew, you know? She is still herself, it’s just that she has grown in making these mistakes and been humbled into understanding that other people have feelings and if you play with them like dolls, or if you treat them indelicately, they’re going to break and you will cut your fingers on them. Sorry, I spun off into that metaphor but I hope that it worked!”

Emma. is now available on Blu-ray and DVD.