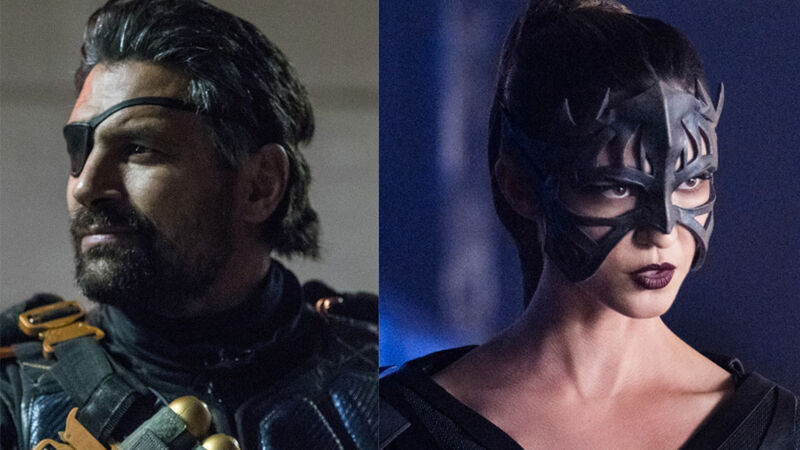 The Definitive Ranking of the Arrowverse Villains

When thinking about what makes a great villain, a Lex Luthor quote comes to mind: “I used to think it was our families who made us who we are. Then I hoped it was our friends. But if you look at history, the great men and women of the world have always been defined by their enemies.”

A hero can only be as great as their villain, and the Arrowverse has had some stupendous villains to match up against our heroes. So, we decided to rank the biggest bads in the Arrowverse from Supergirl, Arrow, The Flash, and Legends of Tomorrow to see who gave our heroes the biggest fight — both physically and emotionally.

The Waverider hit some narrative turbulence during Legends of Tomorrow Season 1, mostly because of Big Bad Vandal Savage‘s weak motivations and backstory. Vandal was first introduced in the second annual Arrowverse crossover, Heroes Join Forces. But unfortunately, he just didn’t deliver as a compelling villain. His relationships with both Hawkgirl and Hawkman were overly complicated, which made it difficult for audience members to connect to the character on any real level.

After multiple speedster villains, it was a pleasure to have a new kind of antagonist for The Flash, a villain who would force Barry to use his wits instead of his speed. Unfortunately, the character never quite lived up to his potential.

The Thinker came off as cheesy with his intellectual puns and his bulky, near-comical aesthetic. His romantic backstory with Marlize DeVoe came way too late into the season for us to begin feeling fully connected to the character — especially because, physically, he kept switching host bodies.

Arrow Season 5 saw Oliver Queen develop and explore and own his political roots. He officially took up the responsibilities that came with being Mayor of Star City. But Season 5 was a rocky ride overall. The writers were likely still finding distinctive voices for the new members of Team Arrow while also trying to figure out the show’s new tone post-Laurel Lance. It’s no surprise the season’s villain wasn’t very compelling

At this point, the “identity reveal” villains were becoming tiresome (both Arrow and The Flash had used the tactic in previous seasons). When Adrian Chase revealed himself as Prometheus, it wasn’t very shocking — honestly, even his costume felt uninspired. But Chase’s demise made up for his lackluster arc. When he teamed up with other Arrow villains during the jam-packed finale, it allowed Prometheus to (literally) go out with a big bang.

Savitar was a great concept for a villain, and proved a particularly threatening antagonist when he let Iris’ life hang in the balance. But speedster fatigue became a big damper for the season and made it difficult for us to feel fully invested in Savitar. The season relied too much on the reveal of the villain (aka Emo Barry from the future), which made the episodes leading up to it feel like filler.

How do you top Reverse Flash as a villain? Well, probably not by introducing another super similar speedster villain that fans can’t help but compare him to. Zoom is an iconic Flash villain from the comics, and this season’s excellent writing allowed the show to seamlessly introduce some complicated speed force concepts. While Jay Garrick was a good identity reveal, his forced relationship with Caitlyn Snow was woefully spark-free.

Mallus was mostly a figurehead throughout the season. We don’t even see what he looks like until the last couple episodes. Until then, he was just a sinister word whispered between the heroes and Damien Darhk. The build-up was great, so, of course, his appearance was a little disappointing overall. However, he did bless us with an epic Beebo battle that no Arrowverse fan will ever forget.

Ricardo Diaz is everything fans wanted Prometheus to be in Arrow Season 5. Kirk Acevedo’s performance made Diaz truly menacing as he pitted the whole city against Oliver Queen. Through Diaz, the show’s writers seemed to find a glorious sweet spot between political storytelling and superhero adventure.

Astra and Non brought family dynamics to the forefront of Supergirl, and family became one of the show’s strongest themes. This pair seamlessly brought Supergirl’s backstory into the present and made Kara face the trauma of losing her planet all over again. Astra and Non’s family connection resulted in a more personal story and helped us easily connect to and even identify with their overall villainous plans.

Superhero shows, expansive and full of supernatural devices and time-turning plots, often recast alum actors in new roles, and it was a true pleasure to see Lois & Clark: The New Adventures of Superman’s Teri Hatcher return as the villainous Queen Rhea. Supergirl Season 2 explored a new side of Kara’s Kryptonian heritage and her budding relationship with Mon-El, Prince of Daxam.

The season also explored the inevitable complications that come with first loves. Those classic complications heightened when it was revealed that Mon-El’s parents wanted to make Earth the next Daxam — which gave the old “take over the earth” villainous trope higher stakes for Kara.

Legends of Tomorrow Season 2 was a vast improvement over Season 1. The writers definitely had a better handle on the team dynamic, as the series gave more space for time travel fun and focused less on villainous exposition. The second season felt more like a comedy and set the perfect tone for this team of misfit superheroes.

The Legion of Doom was used just enough during the season, with three of the most iconic villains from the Arrowverse steering the ship. Malcolm Merlyn, Reverse Flash, and Damien Darhk all had unique individual personalities, and their group dynamic was delightful. The show also delivered a perfect ending for Reverse Flash’s full story arc. Stories like these help the Arrowverse feel truly connected.

Damien Darhk has two television shows and several seasons under his belt, which is why he’s a fully fleshed out character who’s earned a top spot on this list. Actor Neal McDonough creates a perfectly layered and complex villain who’s both a family man and totally evil. He’s great at landing a joke, then immediately turning up the intensity of a scene.

Damien caused a lot of destruction in the Arrowverse — he made the Legends’ lives a living hell and murdered Laurel Lance — but he also opened the door for a new and important component in the Arrowverse: magic. He and Mari paved the way to bring Constantine into Arrow and, now, Legends of Tomorrow.

One of our favorite nail-biting moments of the Arrowverse was the battle between Ra’s Al Ghul and Oliver on the mountain. The best villains are the ones who hold a mirror in front of our heroes to show them what type of person they really are and, more terrifyingly, the type of person they might become.

Oliver has always feared becoming a truly bad person. He became a vigilante to right the wrongs of his father and, deep down, clear his conscious of all the bad he did during the five years he was away. After battling Ra’s, Oliver became the person he most feared. But in doing so, he helped the rest of Team Arrow find their own heroism as they had to go up against Oliver himself.

Reign is one of DC TV’s most complex villains to date. Samantha was first introduced as a seemingly normal friend who quickly created bonds with Kara, Alex, and Lena. Supergirl Season 3 mainly focuses on the conflicting power between Samantha and her alter-ego. Both Reign and Samantha became fully fleshed characters thanks to their conflict with Supergirl and their much more complex and twisted dynamic with each other.

There are many reasons The Flash is on everyone’s must-watch list, but Reverse Flash is surely the biggest. It was fun watching the lighter side of DC television as Barry learned more about his powers during the show’s pilot, but what hooked us was the reveal that Harrison Wells was, in fact, from the future.

This reveal created a standard for the show, and some of the series’ best reveals would play after The Flash’s logo bumper sped onto our screens at the end of each episode. Plus, Reverse Flash truly challenged Barry, as he learned more about the darker side of being a hero.

The best villains are the ones who believe they are the heroes. Malcolm wanted to destroy The Glades because he thought he was improving Starling City, but along the way, he lost his only son, Tommy, to his demented sense of justice. Arrow and Legends of Tomorrow gave Malcolm several seasons of development, which helped him become such a well-rounded character.

Additionally, actor John Barrowman gave a very layered performance — especially when it came to Malcolm’s relationship with his daughter, Thea. Whenever Malcolm showed up on the screen, you never knew if he was there as a friend or a foe. And that’s exactly the way we liked seeing him. Malcolm didn’t just have a great villain arc. His character’s journey gifted him the perfect redemption story.

Arrow Season 2 showcased some of the most intense episodes in the DC television universe — and made five tedious seasons of flashbacks worth it. That payoff was all thanks to one guy: Deathstroke.

Slade Wilson was both friend and enemy to Oliver Queen. Yes, he helped him survive on the island, but then he made his life a living nightmare back in Starling City. Wilson broke the Queen Family (RIP Moira), but especially Oliver. To this day, he still hasn’t been able to fully recover.