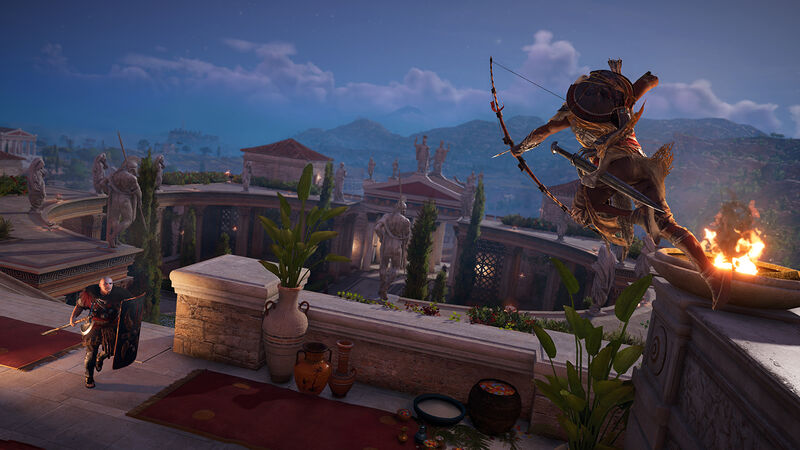 When we first set foot in Ubisoft’s digital depiction of Ancient Egypt, it was a breathtaking sight to behold. With sprawling seas of sand swirling in the wind and pyramids looming majestically over the horizon, visually, it couldn’t be clearer that this was a new start for the series.

Now, a few months later, we finally sat down with a longer build of Assassin’s Creed Origins. Yet, instead of giving us more pyramids to scale and tombs to discover, this extended demo offered up a series of surprisingly small-scale adventures.

Story-wise, this longer demo gave us the most insight into Origins’ protagonist yet. As the last surviving member of an ancient line of Egyptian warriors called the Medjay, Assassin’s Creed’s latest hero is just as mysterious as you’d expect. Named Bayek, this Egyptian enigma will eventually go on to found the Assassin’s Brotherhood. Yet, for our demo, we joined him midway through his ambitious journey.

Starting a few hours into the game, the demo’s opening cutscene sees Bayek and his wife Aya, being summoned by Cleopatra herself. Walking through a typically decadent Egyptian party, the pair soon stand face to face with the aspiring monarch. With tales of the duo’s skills spreading across the land and a merciless organisation known as The Order Of The Ancients standing in the would-be queen’s way, Cleopatra asks the pair to track down and slaughter her elusive enemies.

As the game loads, we’re surprised to see the E3 demo’s desert locales swapped for the lush region of Kanopos Nome. With rumours spreading that this part of Egypt is ruled by a particularly nasty member of The Order Of The Ancients called The Scarab, Bayek and Aya part ways and begin their hunt.

Unlike previous Assassin’s Creeds, however, taking on this story mission isn’t just as simple as heading to a waypoint and triggering a cutscene. For the first time in the franchise, players have to actually level up, proving that they are worthy of tackling the game’s main campaign.

Have Side Quests and RPG Elements Improved Things?

With the first major story mission in our quest log locked at level 14 and our Bayek sitting at a lowly level 12, we clearly had some work to be getting on with.  So how exactly do you level up in Origins? The answer lies in another series first — side quests. Ubisoft’s latest historical adventure sees players interacting with a wide range of different NPCs on their travels, taking on different tasks in order to make Bayek a more formidable warrior.

Unfortunately, though, these side quests can often feel like a bit of a slog. With taking down even high level enemies only rewarding players with stingy amounts of XP, simply exploring and taking on foes you encounter isn’t enough to level you up. This wouldn’t be an issue if Origins’ side quests were compelling, but from what we saw in our demo, these secondary missions often felt a bit lacklustre.

Whether it was dragging a series of bodies over to a distraught merchant, moving barrels of hay, or more often than not, rescuing a prisoner from a camp, the narrative motivation for each of these mini missions always seemed like an afterthought.

It’s worth noting, however, that not everyone feels the same about this. Others (namely Fandom’s own Alexa Ray) felt that her particular web of  side quests did a good job of facilitating exploration — but we can’t all be right.

Combat Is A Big Step Up

Thankfully though, the game’s new combat system is something we can both agree on. In Origins, fighting your foes feels like a far more intricate affair in  than in previous Assassin’s Creeds. Instead of a single button press triggering fluid-looking but shallow-feeling combat, this time around, players can equip multiple weapons, have both a heavy and a light attack and can even charge said heavy attacks.

This means that there’s now a refreshing element of strategy to each skirmish, with players able to lure out individual enemies with a carefully aimed arrow and then use a stream of both light and charged attacks to unleash deadly combos on foes.

Yet, thanks to the new open world approach, an element of strategy actually comes into play long before Bayek’s unsheathed his sword. Armed with a bow and the aerial advantage that comes courtesy of his eagle companion, Senu, soaring above each area and carefully planning your assault can be a pretty satisfying experience.

Still, scouting out the area and getting a feel for the fight ahead is obviously only half the fun. With multiple entry points to each camp, caged animals waiting to be unleashed on foes and even the ability to complete objectives without clearing each outpost, there is a refreshing amount of ways to approach each combat situation.

While the addition of these extra missions could have been a great opportunity to flesh out the game world, the five or six side missions we participated in felt too self contained and bare-bones to truly contribute to the world’s lore.

Once we eventually racked up enough XP to take on the main story, however, the narrative started to pick up. While the first few quests saw us once again rescuing people from camps, the story eventually saw us riding out to an outpost, before returning to a huge palace to find it under siege.

The battle that followed was fun, cinematic and frantic, offering the kind of excitement that the side missions we sampled had been sorely lacking. After the battle, our quest for The Scarab led us down an interesting path, with a mid mission twist turning the tables on poor old Bayek and leaving him in a pretty precarious position.Unfortunately, embargoes mean that we can’t go into much more detail. Yet as we reached the demo’s conclusion, we definitely found our interest in Bayek’s story starting to grow.

Origins‘ setting is undoubtedly magnificent. Yet unfortunately, the incredibly slow levelling and disappointing side missions left us yearning to be rewarded with faster progression for our actions and given more XP for exploration. With the build we played still a month or more out from the final game, we’re hoping that Ubisoft will take the time to make these subtle but crucial tweaks in order to keep Origins feeling fresh for its duration.