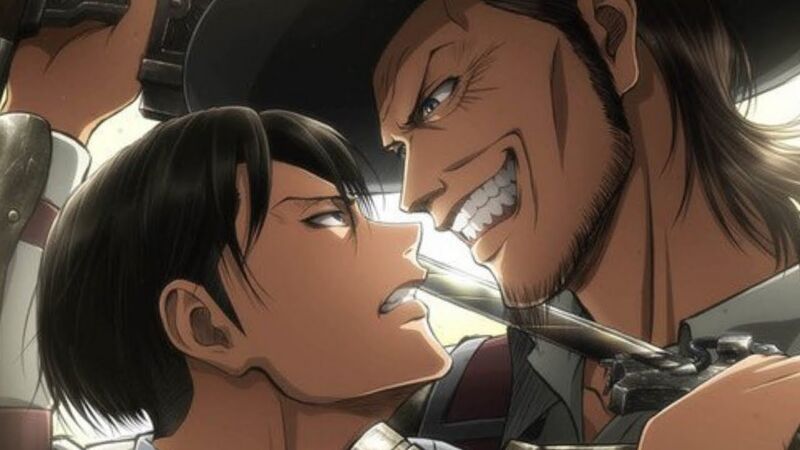 By the end of Attack on Titan Season 2, fans were left with a number of questions surrounding Eren’s newfound Coordinate powers and the identity of the Beast Titan. Attack on Titan Season 3, Episode 1 picks up where the previous left off, but it rightfully doesn’t answer any of the questions from the previous season. Instead, we begin with a time jump. A much older Eren recalls his talk with Armin about what’s beyond the sea. It’s a serene moment and one that’s meant to set the tone and give the new season direction.

The Calm Before the Storm

However, before we can explore the sea and beyond, the anime jumps back to the aftermath of Season 2. Unexpectedly, it’s a lighthearted scene. Mikasa has recovered from her wounds, Eren and the gang appear to be in good spirits, and Captain Levi‘s cleaning standards are still as ridiculous as ever.

It’s a strange moment. Despite how lighthearted this scene appears on the surface, it’s clear that something has been left unspoken. The Scout Regiment members share a bond born of tragedy, and it permeates the room. You feel it in their interactions, in how they lock eyes, avoid gazes. The animators took care to give this scene and others like it the weight they deserve. After all, the future of humanity is at stake, and those placing everyone in peril are not simply Titans but humans.

Their situation is dire, but the positive moments are enjoyable. It’s something the creators do well, undercutting slice-of-life scenes and comedy with dark undertones. It’s as if they know we need this calm before the storm, a moment of reprieve before the real danger appears.

A Necessary Shift in Tone

Fans who haven’t read the manga may find the shift in tone this season a bit jarring, but it’s necessary to set up the political corruption and new antagonists. Instead of Titans breaching the wall, it’s the dialogue between characters and moves made behind-the-scenes that bring the drama. With the revelation that Titans are actually humans, it makes sense that the next big fight would have our favorite squad facing off against corrupt humans.

But the Season 3 premiere isn’t fully devoid of action. A shocking death kickstarts a series of events that propel the episode forward at breakneck speed. Before that, it’s a slow build — at least by Attack on Titan standards. However, the action scenes are worth the wait, as setting up political infighting early raises the stakes of battle.

These high-stakes battles and operations mimic chess matches, with one side always trying to stay three steps ahead of the other. It’s during these moments that we get to see our favorite characters shine. Mikasa is just as badass when fighting a person as she is a Titan, and we see Sasha continues to shine with her bow and arrow.

Meanwhile, Levi shows off his intelligence, creating strategies on the fly to keep his new squad alive and safe. However, it’s Kenny who steals the show, as he gets a leg up on Levi, showing off his mental prowess and power all at once. Despite Levi’s skill level, Kenny manages to make Earth’s greatest hero look small in comparison.

From the trailer, we know that Levi and Kenny have a connection, and we get little more information in this first episode. But there’s more to learn about this mysterious character and his motives. These revelations will likely not only give us Kenny’s motivations but also give us background on Levi.

Unfortunately, we don’t see much of Eren once things kick into high gear. But it fits his current state. Eren continues to struggle with his newfound powers and Titan form as he did before. He does have some standout moments, but they are often off the battlefield. However, it’s clear that he and Historia will be integral to the team’s success in Season 3.

Is the Attack on Titan Season 3 Premiere Good?

Despite its slow start, Attack on Titan Season 3, Episode 1 is sure to satisfy fans. The slower parts are necessary, not only for our sanity but to clearly lay the foundation for all the corruption, scandal, and infighting to come. The quiet, tiny, laughable moments will put fans at ease, making them feel like they’re a part of Eren’s ragtag family.

It’s a great tactic that gives us a break from the emotional weight of Season 2’s finale. These moments also help us remember why we love these characters so much. The creators expertly strengthen our attachments to them before throwing them into peril. It’s a cruel but effective technique that will have fans on the edge of their seats by the time Kenny hits the scene.

While we would’ve preferred more Eren and answers to Season 2’s most pressing questions (we’re looking at you, Beast Titan), the Season 3 premiere of Attack on Titan gave us enough to get excited about. Based on what we saw, this season is sure to be a wild ride that will leave fans in a constant state of anxiety. Luckily, fans will be able to get some of their frustration out each week by rocking out to Season 3’s opening theme, “Red Swan,” a collaboration between the hugely popular band X Japan and singer-songwriter Hyde.

Attack on Titan Season 3 will simulcast on Crunchyroll on July 22nd, and Funimation will air the simuldub on August 18th.