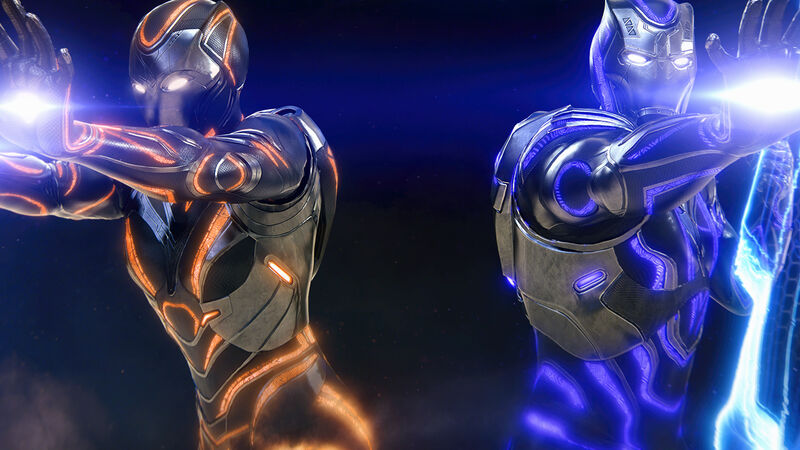 Having previously collaborated on Star Wars: Secrets of the Empire and Ralph Breaks VR, ILMxLAB’s and The VOID have a new immersive VR experience launching this week with a notable additional partner – Marvel Studios. The result is Avengers: Damage Control, which allows those who take part to both interact with and fight alongside many familiar heroes from the Marvel Cinematic Universe in a way they’ve never experienced.

Fandom got an early preview of the experience, which is available at select The VOID locations in the US, beginning Friday, October 18, for a limited four-week run.

Taking about 20 minutes in total, Avengers: Damage Control begins as you have been recruited by Shuri (Letitia Wright, reprising her role from Black Panther and Avengers: Infinity War and Avengers: Endgame) to test her prototype Emergency Response Suits, which blend Wakandan and Stark Industries technology. Even as you are simply doing a test run of the armor under Shuri’s tutelage, it’s innately cool to both see and feel yourself firing fire repulsor beams just like you’ve seen Iron Man do in the films. And the details are great, from the way you feel any “hits” your armor takes thanks to the gear you’re wearing on your body, to little touches like your own first initial and last name personalized on the armor you see yourself wearing through the VR headset.

The story really gets going though when a revived Ultron begins an attack, leading to you and your fellow recruits — up to four can do the experience together – getting whisked through the MCU, where you encounter many notable characters, before fully joining the fight.

When it came to deciding on the exact storyline, Avengers: Damage Control Executive Producer Dave Bushore, who serves as Vice President of Franchise Creative & Marketing for Marvel Studios, laughed that there were, “Many, many iterations.” He noted that even after they honed in on the story, action beats continued to change throughout the process and that it ultimately was similar to how they develop the Marvel Studios films in many ways.

Said Bushore, “You start with an empty whiteboard, and a bunch of people yelling at each other with too much coffee, late at night. ‘Let’s do this, and let’s do that, and let’s go here…’ I think the fun of developing the story and the idea for us was, ‘Okay, we get to do something we’ve never done before, but we get to do it with the people we’ve worked with on the films, from across all mediums. The actors, the people at ILM, the people at ILMxLAB, the visual effects producers… You’re having the same conversation [as when you make the films], but on a new platform, with a new audience, and in a new way.”

While many MCU characters appear in Damage Control, some are more prominent, and those involved said that often came down to their abilities and what they added to the experience.

Technical Producer Grant Anderson noted many named Spider-Man’s appearance as a favorite moment, which they attribute both to the character’s popularity, but also, “Because he moves so uniquely throughout the scene – the way he defies gravity, and hangs upside down on the web. Seeing that in 3D space as if you’re actually right there is actually a totally different experience than seeing him on film. “

Added ILMxLAB’s Ian Bowie, who served as Damage Control’s Experience Director, “We had a lot of moments where we knew, ‘We HAVE to do this.’ We had characters like Dr. Strange –  well, we HAVE to go through a portal.”

Bushore said they had a lot of fun working with several MCU actors on Damage Control, including Wright, Benedict Cumberbatch, Paul Rudd, and Evangeline Lilly, remarking, “When you put someone like Benedict in this situation, he’s got a lot of experience using these techniques, because we have a lot of the same tools when we’re shooting a movie with him, so he was used to that. But he wasn’t used to VR! His performance was his own and unique to the VR experience.

The Doctor Strange Sanctum sequence is a very memorable one in Avengers: Damage Control. As in the previous ILMxLAB / The VOID collaborations, you actually are physically moving around as you do the entire experience, which in the Sanctum means walking down some suitably/magically trippy ramps to reach the good Doctor.

Said Bushore, “We went through rehearsal [with Benedict] the morning of his audio and facial capture, and he’s blocking it and we’re telling him about where people will be and have him know their distance [from him], and what they’ll be experiencing at this point. And was like, ‘People are going to LOSE THEIR MIND!’”

Locations and tickets for Avengers: Damage Control can be found at thevoid.com.