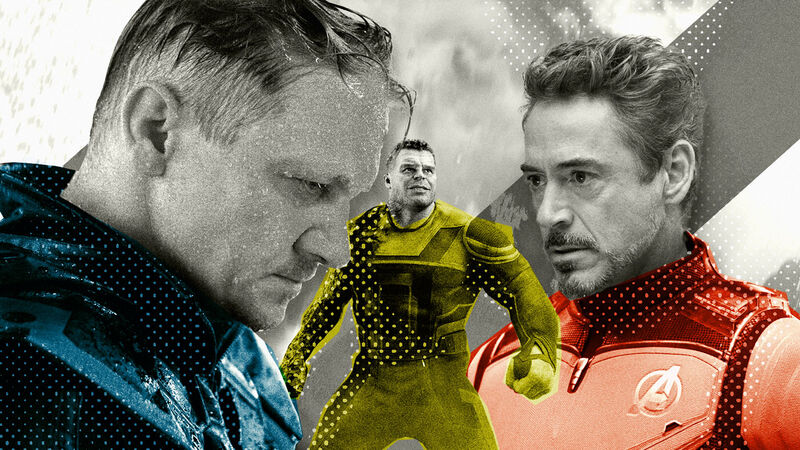 ‘Avengers: Endgame’ Provides a Roadmap for Healing from Psychological Trauma

Avengers: Endgame marks the heaving culmination of over 10 years of intertwining origin stories, heroic acts, and transformative journeys resulting in a community of superheroes finally facing their most foreboding villain: Mass trauma.

Surprisingly early in the film, the Avengers manage to track down a visibly damaged Thanos. This confrontation is unsettling, if not dissatisfying. Poetically, Thanos captures the formidable and inescapable impact of trauma before being beheaded: “I am inevitable.”  The permanence of the snap takes hold. Our heroes realize that the source of their pain can be confronted, even destroyed, but its emotional consequences have been determined and cannot be undone.

Thanos as an inevitable force is a strong current in Endgame. The MCU franchise has always presented itself as an extended exercise in dealing with grief; on a personal level, our protagonists have lost fathers and mothers and brothers and friends and selves — deaths that haunt our individual characters in their standalone films as well as in their climactic reunion movies. In Avengers: Infinity War, however, death arrived on an unprecedented scale. The snap amounts to a kind of interpersonal trauma at the level of global terrorism, and the characters who make it to Endgame must grapple with the pain that follows. In its 182 minutes, the movie tracks the recovery of its main players, and in effect, serves as a metaphorical guide to psychological recovery for its fans.

We know from trauma research that when humans are exposed to large-scale suffering and hardship, and in this case when the planet itself is threatened by global trauma, there is a cumulative toll and a collective toll, felt by all. Endgame takes us by the hand and guides us through our long-awaited path toward healing. First step: Assess our wounds. The effects of the snap are taken in by our steward, a confused Scott Lang, as he finds his way home from the quantum realm. The post-snap world is desolate, uncleaned, neglected. The universe is in ruins. People have abandoned hope. Imprints of the past are scattered throughout. The landscape is a picture of unresolved traumatic grief, like a mind oppressed by disconnection and chaos.

“What if we could control the chaos?”

After taking inventory, disbelief and hopelessness settle in. The thought of considering any kind of solution stirs anger and resentment. However, Endgame deepens our understanding of trauma by introducing a brilliantly tangible concept to get us through this part: Time travel is an analogue for psychological healing. Endgame handles traumatic loss by first mirroring the painful and echoing absolutes that often follow mass trauma exposure, e.g., “We will never be OK again,” “Nothing will make this right,” “We will never stop hurting.”

Of course, like time travel, resolution seems like an impossible feat. The quantum realm is illusory and daunting. Among trauma survivors, the path to healing seems remarkably terrifying. As Tony Stark cautioned, by attempting to change anything, “you can screw it up worse than it already is.” But our heroes take the leap nonetheless. They decide to get into the mess of time travel.

And the art of autobiographical rewriting begins. The plot of Endgame serves as a metaphorical instruction guide for a recovery process known as Narrative Reconstruction. Often used as a part of trauma treatment, this psychotherapy involves guided exposure to the traumatic event through vivid retelling and exploration of key moments along the survivor’s timeline, followed by the gradual and systematic reconstruction and reorganization of memories in order to create a coherent and acceptable narrative. In layman’s terms, we repair the future by consolidating past memories. We control the chaos.

Endgame’s plot centers around an exhilarating time heist, but the film names specific, if not nonsensical, rules of fictional physics to keep us within the bounds of the MCU reality. The film is fully aware of its plot holes, acknowledging that the journey of time-hopping is more important than its mechanics – as Natasha Romanoff puts it, “I get emails from a raccoon; nothing sounds crazy anymore.”

As such, simple escape routes are out of the question. Hulk explains that they cannot use time travel to simply kill Thanos as a baby. The Avengers cannot undo or prevent the catastrophe from happening. Similarly, in trauma treatment, parameters are clearly stated. As we embark on the journey, we establish what we can change and what we can’t change. For instance, we do not try to erase from our mind the events that damaged us or violated our sense of self or safety– instead of changing our history, we revisit it to collect the pieces of ourselves we’ve left behind, and reconnect to the positive emotions that give us preservation, hope, and healing.

Avengers: Endgame also makes a clear distinction between the vanished and those who are truly dead, and those rules have a remarkable similarity to the expectations of trauma treatment. Recovery of our damaged, lost selves is paramount to rewriting our autobiography. Rocket reminds Thor of the important distinction between real and imagined loss; one integral to the concept of overcoming traumatic grief.

“I get that you miss your mom. But she’s gone – really gone. And there are plenty of people who are only kinda gone. And you can help them.”

Recovering the Infinity Stones at the actual time points in which they were “collected” in the Avengers’ narrative to create healing in the present is a superb parallel to trauma reconstruction. Psychologists and trauma experts often help survivors gain agency and find meaning through re-authoring history. This is done with a significant amount of preparation and guidance.  Like the intel-gathering and historical reviews that take place in the boardroom of Avengers headquarters, restorative trauma work is a systemic, well-planned, structured process.

Naturally, the process activates tremendous fear, and should include outreach and contact with meaningful, interpersonal relationships. Tony’s father and Thor’s mother, for instance, become the identified constants in the reconstructed timeline; these figures are lost in the future, but can give Tony and Thor the much-needed validation and emotional connection they need to move toward healing.

Realistically, the survivors of the snap adopt extremely creative responses in interpreting their traumatic experiences, and their reactions reveal how they’ve reconstructed their assumptive worlds. A person’s assumptive world refers to the core beliefs that ground, secure and orient them to their universe. Black Widow, for instance, demonstrates slight shifting of her beliefs in her quest for post-traumatic organization and control. Nat’s revitalized sense of leadership in service to the remaining allies is, at first, comforting. However, her hyper-focused dedication hints that she remains stuck in her trauma. Her survivor’s guilt creates insurmountable pressure to take action.

Similarly, Steve Rogers reconstructs a narrative in which he maintains an identity of superheroship; he continues to protect and defend, but in a psychological manner. As a steward of healing, he runs grief support groups and assures other survivors that they will be OK if they find purpose: “You gotta move on,” he encourages others, “The world was left to us, and we gotta do something about it.” It is true, the oceans are cleaner, Cap offers in his typical silver-lining-finding manner. Bruce Banner’s transformation is a result of a need to fully integrate his fragmented selves. His grief was compounded. “I lost twice,” he explains.

Only weeks after the event, Tony exhibits aggression, hyper-vigilance, self-harm, and blame. His outbursts, however, are normative post-traumatic signs of something called enhanced threat perception, which tells us that his emotions are felt too strongly and that the experience of triggers (trauma reminders) are overwhelming his nervous system so soon after the event. In time, his brain’s regulatory watchtower returns to a reasonable setting.

Other reactions are not so adaptive. Thor’s trauma response is among the most common presentations seen in our own world: PTSD disguised as self-loathing, binge-drinking, and social isolation. He has learned to dampen his reaction to pain, relying on numbness and avoidance to push the trauma out of his mind’s existence. When we dampen negative emotions, however, we also dampen the positive ones. Thor has lost his sense of curiosity and no longer seeks the experiences of thrill, excitement, and novelty. Disappointingly, “Fat Thor” slips into a recurrent comedic outlet in the film in earlier beats, but it is the heartfelt interactions he has with Bruce Banner and his mother that give us the open window into Thor’s mental illness—symptoms of disconnection, depression, and loss of personhood.

Clint Barton is stuck in a cycle of re-traumatization. As a relentless assassin, Barton creates a world in which he repeatedly re-engages blame, violence, and guilt. Seeking elevated risk and danger may give him a sense of moral purpose, but Barton is merely bombarding his body with adrenaline in a futile attempt to consolidate the original trauma in his brain. The neurobiological symptom is aptly referred to as repetition compulsion. This is the opposite of numbness. In a way, he is simply trying to feel alive. The original six must, somehow, coexist in a single timeline.

It isn’t a bad idea to see re-authoring our history as a challenging quest. What are we, if not superheroes, to grapple with our historical trauma in such confrontational ways? As a means of recovery, the process is a systematic, well-planned and structured process. Expert guidance is often recommended to treat complex trauma such as prolonged grief. Questions like “Where and when do I go in time?” and “What do I do when I get there?” are best handled by a professional familiar with trauma narrative protocols. Think of a supportive but competent Bruce Banner/Hulk figure who would worry about the mechanics such as inputting coordinates and setting return launches.

This last mission is perhaps the most cherished lesson the decade-plus of the MCU has offered us – what have we experienced in our lives in the past decade that has tested our mental strength? What losses, breakups, and deaths have we seen? What violations of safety, personhood, or connections have nearly caused us to give up? Can you identify, in the last eleven years, times when you have fought so hard against the feelings of isolation, desperation and failure?

Along the way, as we’ve grown alongside these heroes, we’ve watched them reclaim their hammer, find flight again, reunite with their loved ones, and say goodbye. If anything, Endgame is a reassurance of our own amazing human resilience. Using the vehicle of time travel, Avengers: Endgame shows us that trauma recovery is possible, by encouraging us to recognize that the perilous, perceivable risks involved in the pursuit of healing  – confronting our pasts, re-experiencing pain, admitting failures, fully accepting real loss – might actually be worth it in the end.

Drea Letamendi
Doctor Drea
Dr. Drea is a licensed clinical psychologist and mental health educator. She co-hosts "The Arkham Sessions," a podcast dedicated to the psychology of Batman.