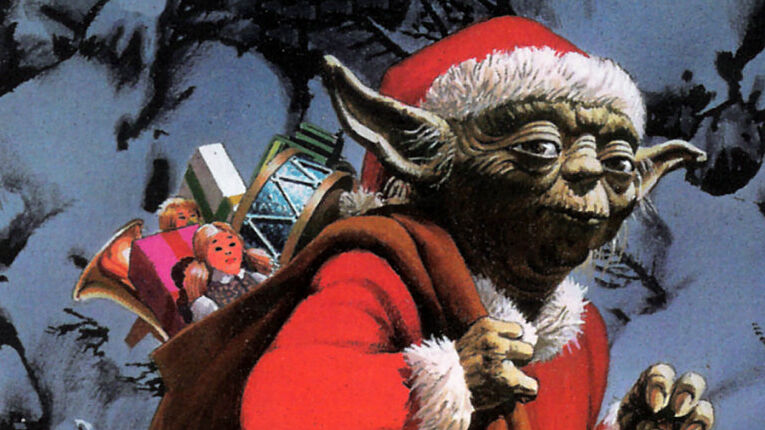 After introducing Life Day in the infamous Star Wars Holiday Special, the films and TV shows studiously avoided any further mention of the Wookiee celebration — until it was finally brought back into canon during the first episode of The Mandalorian (which you can watch now on Disney+).

Life Day involves Wookiees coming together to feast and visit the Tree of Life on Kashyyyk, which they decorate with shining ornaments called Life Day Orbs. Traditionally, Life Day was celebrated once every three years, but during the period of the original Star Wars trilogy, Wookiees began celebrating it annually.

Take a minute to imagine if the Star Wars Holiday Special had actually been a success. (In reality, it lost out in ratings to an episode of The Love Boat airing in the same time slot.) Despite its listless story and awkward musical numbers, the special gained enough momentum when it aired on November 17, 1978 that CBS decided to air it again the following year. Then the special aired again in 1980, riding high off the release of Empire Strikes Back in May of that year, and then continued to show up every December following that until the Star Wars Holiday Special improbably became a part of the holiday programming firmament alongside Frosty the Snowman and Rankin and Bass’ Rudolph the Red-Nosed Reindeer.

In an imaginary world where Star Wars is as synonymous with Christmas as Charlie Brown, we would expect to see a lot more holiday-themed connections showing up in the Star Wars canon. Even in our reality, Santa Claus has already popped up from time to time as a character in Star Wars video games, comic books, and role-playing games. To truly integrate Life Day with our holiday traditions, it would need a similar legendary creature of magic who represents the spirit of the holiday — like Santa Claus, but with a George Lucas-inspired twist. In the Star Wars universe, there’s no better candidate for the role than Jedi Master Yoda.

As it turns out, Yoda and Santa Claus have quite a lot in common. Let’s check out some of Santa’s definitive traits and how Yoda compares. On the next Life Day, you’ll expect Yoda to come down the chimney with presents for all the good younglings.

Santa Claus is based partially on Saint Nicholas of Myra, a real person who lived during the third century in the southwestern part of what is now Turkey. Saint Nick is purported to have performed several miracles, and saved three women from a life of prostitution by dropping a sack of gold through their windows at night so their fathers could pay a dowry for their proper marriage — hence Santa Claus’ gift giving on Christmas. While many saints became martyrs for their faith through a horrible death, Saint Nicholas seems to have died of old age like Yoda, in his case around the age of 73. Unlike Yoda, however, Saint Nicholas never fought anyone with a lightsaber or levitated an X-Wing out of a swamp. Advantage: Yoda.

He Knows if You’ve Been Naughty or Nice

One of the most basic abilities of a Force user is a sensitivity to both the Light Side and the Dark Side. And powerful Jedi, as we’ve seen several times, can use their powers of telepathy across vast distances of many, many parsecs. After his death, Yoda exists as a Force ghost, with the ability to appear anywhere at any time. Suffice to say, if you live on Coruscant or Yavin or even Tatooine, if Yoda puts his mind to it he can figure out if you’ve been bad or good.

He Lives at the North Pole

Dagobah is not Hoth, but it must be incredibly remote compared to the rest of a Galaxy Far Far Away. Put it this way: In The Empire Strikes Back, when the probe droid spots the Rebel power generator on Hoth, Admiral Ozzel dismissed it, thinking it more likely that smugglers were living on a frigid ball of ice. But when Luke arrives at the swamp planet looking for Yoda, his X-Wing can’t detect any cities or technology. Therefore Hoth must either be on the way to somewhere, or close enough to the rest of galactic civilization to expect smugglers to live there. Dagobah, on the other hand, must be so difficult to reach that no one thought it would be worth building any kind of settlement on a planet that was clearly capable of supporting abundant life.

Strictly speaking, Yoda doesn’t employ any elves. With his short stature and pointy ears, Yoda is the closest thing the Star Wars universe has to an elf. But Yoda, Yaddle, and Baby Yoda aren’t going to manufacture enough toys themselves to go around. In his days on the Jedi High Council, Yoda could probably have had any damn thing he wanted built by the Republic. Another Jedi master even managed to have an entire army of clones created without anyone noticing, which shows you how astronomically big the Jedi operating budget must be if something that expensive can still slip through the administrative cracks. If that’s the case, then surely Yoda could get a mini-lightsaber and one of those floating training droids to every deserving youngling in the galaxy.

He Comes Down the Chimney

If the thickset Santa Claus can fit down a chimney in our universe, surely diminutive Yoda can squeeze through chimneys in Star Wars. We never see Yoda levitating himself, but he must be using the Force to propel all his flip moves and jumps during the lightsaber combat we saw in Episodes I and II. That means Yoda can jump-flip back up that chimney as well.

In his later years, Yoda lived in hiding on Dagobah. But before the fall of the Republic, Yoda could flit about the galaxy in his own astromech droid-equipped starfighter. And when he needed to, like during the Battle of Geonosis in Episode II, Yoda could commandeer an entire Republic fleet to deliver a strike force of Jedi and Clone Troopers across the galaxy. With hyperspace travel allowing Yoda to cover great distances in very little time, and the unlimited resources of the Jedi, he could make sure every youngling gets the Life Day toys they wanted, spreading holiday cheer throughout the galaxy.