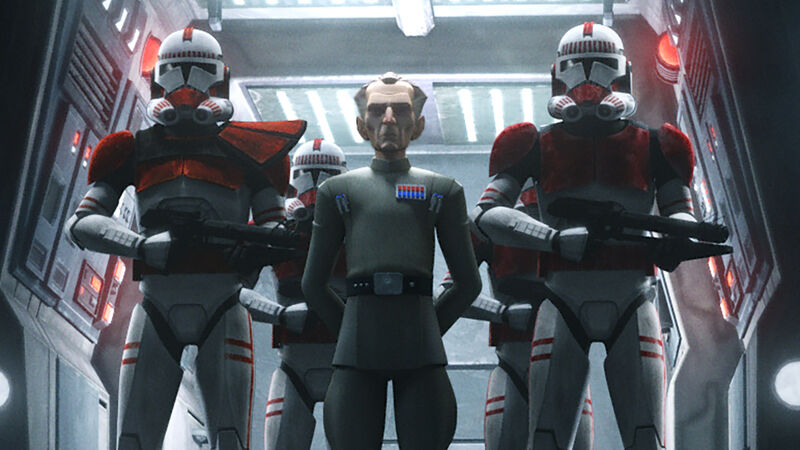 ‘The Bad Batch’ Bridges the Gap Between Clone Troopers and Stormtroopers

Since 1977, Star Wars has loomed large in the American imagination. From space wizards with laser swords, to charismatic smugglers who have a little too much luck, to a princess who grabs a blaster and saves herself, the heroic archetypes of George Lucas’ space fantasy have captured the love of generations of kids and adults. For decades, we cheered as they bravely fought against the powerful Sith Emperor, his dark apprentice, and their endless army of faceless, disposable minions. A clear-cut story of good vs. evil.

But mythological parables are designed to be consumed quickly and decisively. They cannot be supported within extended storytelling; the unrealistic moral binary leads to narrative death. And nothing in Star Wars is more morally tricky than row after row of identical white helmets dying in the perpetual cat-and-mouse game between the Sith and the Jedi.

Republic Clone Troopers. Imperial Stormtroopers. First Order Stormtroopers. For almost seventy years, variations of these foot soldiers have taken a backseat to the stories of Jedi and Senators. But with Disney+ debuting Star Wars: The Bad Batch on May 4th, 2021, it’s worth catching up on just how integral — and complex –– these side players really are to the galaxy stage.

The Bad Batch will follow a unique contingent of clone troopers during the rise of the Empire. Officially known as “Clone Force 99,” the special forces platoon — first introduced during the final season of Star Wars: The Clone Wars — consists of clones with a very specific set of skills. Skills that allegedly come from “mistakes” in the cloning process which ended with beneficial mutations to Jango Fett’s genome. There’s Hunter, the leader with enhanced senses that allow him to sense electromagnetism, a handy skill in a war against droids. The squad’s sniperCrosshair is capable of hitting a target up to ten kilometers away. Wrecker‘s enhanced strength means he can lift objects such as LAAT troop transporter vehicles! Rounding out the squad is Tech, a clone with enhanced intellect, making him a whiz at decryption, engineering, science, and hacking. Just prior to The Bad Batch, another clone joined the team: Echo, a former Domino Squad member with a tragic backstory.

Set in a time of transformation, the members of Clone Force 99 are positioned to give audiences a first-hand look at how men created to defend the Republic from danger transformed into enforcers of an authoritarian regime.

To that point, The Bad Batch producer Brad Rau recently teased to Fandom that fans can expect things to get complicated, quickly.

As Rau put it, “When you have something like Order 66 happening, suddenly this massive army of clones are bad guys, just to speak a little bit about the design of that. When you take clones and you start taking their individual colors and their names away and they’re referred to as numbers and they all have more of the same looking outfits and their equipment is stripped of color and [officer uniforms become] more of an Imperial gray with an Imperial cog, it all starts to be this interesting Imperial version of the clone army. It’s shocking how quickly you’re like ‘Whoa, these are bad guys!’ And the way that our music pulls that all together, and the way that our guys deal with him, are all massive things we talk about and we get into. So if you’re interested in that, you’re going to like The Bad Batch.”

As with many terrible decisions with long-lasting repercussions, the idea for a clone army began with a vision. Specifically, a series of visions Jedi Master Sifo-Dyas had prior to 32 BBY. For years, Master Dyas had specialized in the collection of Sith artifacts, locking them safely away in the recesses of the Jedi Temple. But he also had the gift of foresight, which continuously showed him an upcoming galactic battle. Convinced the Jedi Order needed to prepare, Sifo-Dyas pitched the idea of a massive clone army. The Council demurred. Not one to be deterred, Sifo-Dyas set out to save the Galactic Republic himself, traveling to Kamino under the ruse of doing so at the request of the Senate.

But Master Sifo-Dyas had been manipulated. As a youngling and a Padawan, Dyas had been best friends with none other than Count Dooku. While the exact nature of the deception has yet to be revealed, it seems likely that Sidious knew about Sifo-Dyas’ visions and…massaged…the situation to his own benefit. In fact, it was Dooku himself who set up the elaborate assassination that successfully removed his oldest childhood friend once Master Dyas’ had played his part. At the behest of Darth Sidious, Dooku then seamlessly stepped into the space left by Sifo-Dyas’ untimely demise to oversee the cloning project to its secret fruition.

Dooku also sought out the bounty hunter Jango Fett and offered him 20 million credits and one completely unaltered clone to raise as Fett’s son. It’s highly probable Dooku was also directly responsible for carrying out Palpatine’s plan to evolve the clone “inhibitor chip” from emergency safeguard to bioengineered mind-control.

THE ABSOLUTE HORROR OF ORDER 66

During Palpatine’s coup, many atrocities were committed. But Order 66 had the widest impact, affecting upwards of a million soldiers. Having a code phrase hardwired deep in their brains that turned them against beloved Jedi commanders would be horrifying enough on its own. Then Star Wars: The Clone Wars confirmed the clone troopers were fully aware of their actions, with some trying, unsuccessfully, to fight the programming command. Only with the removal of the inhibitor chip would a soldier be able to restrain himself from instantly attempting to execute any Jedi in his path.

With such a potent weapon at his disposal, what could have caused Palpatine to scuttle the entire Kamino project? Why replace constructed, seemingly easily controlled clone troops raised from birth with adult humanoids conscripted from sullen worlds chafing under a regime change? To date, the only clue was dropped by dialogue between characters in the comic Darth Vader: Dark Lord of the Sith 2. The quick exchange sees them shocked and confused that Palpatine has ordered the Kamino production facility shuttered. They muse over who will protect the fledgling Empire and if perhaps this signals the days of war are finally at an end.

There are plenty of options to ponder about why the Clone Trooper project came to an end. Who knows, perhaps Darth Sidious did not close the Kamino cloning facility at all. Perhaps a band of scrappy ne’er-do-wells incapacitated or destroyed it, saving countless future clones from enslavement. That might explain Sidious’ eventual, much smaller-scale cloning facility on Exegol. Why have such a bizarrely understaffed facility when Kamino technology would spit out more Snokes than you could shake a stick at?

The trailer for Star Wars: The Bad Batch hints this might be the case. Clone Force 99 finds themselves on Kamino in the immediate aftermath of Order 66. Obviously, the details are being kept under wraps, but it appears the Bad Batch defects from the Empire with a human child named Omega. A human child that looks suspiciously like they are related to Avar Kriss from Star Wars: The High Republic and who wields an energy bow known until now as an exclusive and rare Nightsister weapon.

While we will have to wait to find out the specifics, producer Brad Rau confirmed to Fandom that The Bad Batch will indeed reveal more about the transition from Clone Trooper to Stormtrooper, stating, “It’s a big deal. It’s a big thing. As fans, we’re very interested in how that works. It’s been really awesome working closely with Dave Filoni to craft how that all goes about and it’s something we deal with a lot.”

THE RISE OF THE STORMTROOPER

No matter how or why it occurred, by 14 BBY, the conversion of the Imperial Army was complete. A handful of loyal Clone Troopers stayed around to train new recruits, but the average galactic citizen could never live up to clones created from an infamous bounty hunter and trained from birth for battle. Due to a concentrated propaganda campaign though, thousands of volunteers were inspired to try and live up to the heroism of the clone troops, while other soldiers were conscripted by force.

Despite harsh retaliation against dissent, the Empire almost immediately ran into problems. Rebel cells began to crop up and harass Imperial outposts. With the galaxy still reeling from the Clone Wars, economic recovery faltered. Fewer jobs meant fewer options, leading to an increase in organized crime. Suddenly, Palpatine was fighting on two fronts: the increasingly organized Rebel Alliance and the Hutt Cartel. By the time of the Battle of Endor, it was common practice to take Stormtroopers out of the academy training prematurely simply due to a lack of bodies to throw into the hungry maw of war.

After the Empire surrendered to the New Republic after the Battle of Jakku, the Stormtroopers found themselves in a similar predicament as their clone predecessors. As seen in The Mandalorian, many of these “remnant Stormtroopers” turned to mercenary work on the Outer Rim or joined up with former Imperial officers turned petty warlords. Others joined up with pockets of the Empire’s remaining elites, attempting to regroup and reignite the war. Most, however, simply went back to their old lives and tried to keep their heads down.

After escaping beyond the reach of the New Republic, Darth Sidious and his chosen few licked their wounds on Exegol and planned their next steps. From the children of the Sith Eternal cult, Sidious chose his elite Sith Troopers, distinguished by their blood-red armor. But in order to take on the combined might of the galactic military, Sidious would need cannon fodder, and lots of it. Enter “Project Resurrection.”

By partnering with corporations such as Jinta Security, the First Order became very skilled at the mass kidnapping of human children. Taken as close to birth as possible, these child conscripts were subjected to a regimen meant to simulate the training of the old Clone Troopers. Except these children aged normally instead of the accelerated growth rate of the Kamino clones. The children were also dehumanized in a way the clones were not; denied affection and set against each other with a dystopian snitch system. Weakness was not to be tolerated. Anyone that couldn’t keep up was left behind, whether in training or battle. They weren’t even allowed to have names. Those who questioned orders, or showed too much empathy, or generally indicated anything other than blind allegiance were subjected to reprogramming. The human version of a droid memory wipe that created an obedient, though lobotomized, soldier for the cause.

It was that future Finn was fleeing from in Star Wars: The Force Awakens when he first met Poe Dameron. Hopefully, fans will eventually get to see more of Finn and Jannah’s exploits in some form, as they liberate remaining First Order “education” facilities. If we’re very lucky, perhaps one or two members of Clone Force 99 might still be around to help. After all, if they had mutations that gave them enhanced powers, it’s possible the genetic markers that accelerated their aging could have been stripped out. Aging as an unmodified human would make Hunter, Crosshair, Wrecker, and Tech old, but perhaps not out of the game. Ending what the Emperor started would be a fitting bookend for the rebellious Clone Troopers. In the meantime, we’ll see how they handled the rise of the Empire in Star Wars: The Bad Batch.