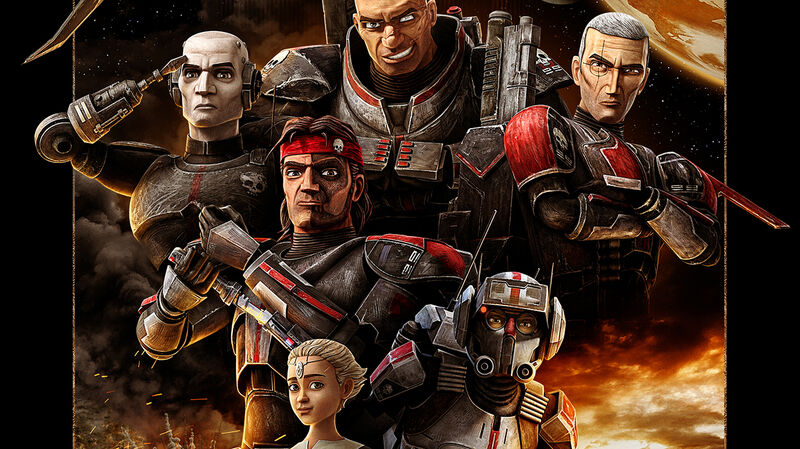 SPOILER WARNING: This story dives into plot points from the series premiere of Star Wars: The Bad Batch.

With May the 4th here, Star Wars: The Bad Batch has arrived on Disney+, via a 70 minute premiere episode that establishes the tense scenario for our title characters. Introduced in Star Wars: The Clone Wars, the modified troopers that make up Clone Force 99 now find themselves on the run in the wake of the events of Revenge of the Sith and Palpatine declaring Order 66, as this group – with one notable exception – find  themselves free of the influence of the inhibitor chips that caused their fellow clones to turn on the Jedi.

Fandom spoke to Corbett and Rau about the events of the premiere, what was established, and what fans can expect as the series continues.

Since Star Wars: The Clone Wars, other animated Star Wars series like Rebels and Resistance have had their own distinct visual styles, so it wasn’t a given that The Bad Batch would continue the look of The Clone Wars, as it ultimately did, and Rau noted, “We talked about it a lot. The Bad Batch definitely is a spiritual successor to Clone Wars so it became pretty clear early on that we wanted to honor that style.”

That being said, they didn’t want everything to look exactly the same, and Rau noted, “We talked about it internally and worked it to great lengths so that we could push the style and get a little more fidelity in the designs and the assets and the animation and the camera language, the way everything is lit, how much depth and focus [there is]. Stylistically, we wanted to carry on that style and also push it all the way through it.”

In a bit of a passing the baton move, the premiere of The Bad Batch even begins with a Clone Wars-style voice over introduction by Tom Kane, something that doesn’t continue as the show goes on. As Corbett explained, “We definitely wanted fans to feel like you were in the Clone Wars but then you are witnessing the end of the Clone Wars in the beginning of this series. It was great to start off that way.”

With five members of the Bad Batch, some extra drama is thrown into the mix by having one member of the group actually want to go along with Order 66, which occurs here when Crosshair sides with the Empire over the rest of Clone Force 99.

When it came to deciding on who the traitor (or, if you look at it from his point of view, the loyalist) among the group would be, Rau remarked, “Crosshair’s a kind of contrary fellow, so it makes sense when you talk about this group of elite clones and the decisions they make trying to help this young fellow at the beginning of the premiere episode and then deciding to help another youngster at the end of the episode. With Crosshair, it’s hard to justify why he would want to be part of all of that with the way that he focuses on his job so it sort of was a natural thing. It wasn’t that difficult to land on him being that guy, to be honest.”

As far as the drama inherent with Crosshair now joining the Empire as the Bad Batch’s enemy, Corbett said, “There’s no better villain than one of your own because they know you the best. They know how you operate, they know your strengths and weaknesses, and I think a weakness for the Batch is that he is their brother so it’s not gonna be easy for them to go against him. If they come face to face, what that would look like? We explore more in the series about the chips and what they begin to learn calls into question whether or not Crosshair had a choice, and choice is something that we talked about in the series. I don’t want to give too much away but we do talk about it a bit.”

THE CANON OF KANAN

A fun tie-in element in the premiere was the appearance of young Jedi Padawan Caleb Dume, who Star Wars Rebels fans know by the name he takes after he goes into hiding, Kanan Jarus.

We see Kanan alongside the Bad Batch at the moment Order 66 occurs, which leads to Clone Troopers killing his Master, Depa Billaba. However, the events depicted in The Bad Batch don’t quite line up with what was previously shown in the comic book Star Wars: Kanan as far as the specifics around Depa’s death.

Regarding those inconsistencies, Corbett said, “I can tell you that that particular sequence we spent the most time on in the pilot, from writing to production to editing to reshooting, because a lot of talk went into how we wanted to portray that pivotal moment with Dave Filoni and with Brad… Everything we did was for a reason and it might not match 100% but it’s sort of just wanting to honor what existed but also give another take on it in this story.”

A big new element to the story introduced in the premiere is Omega, a young girl the group meet on Kamino who turns out to be a modified clone like they are. Though who she is a clone of and what her modifications and abilities exactly are remain a mystery for the time being.

As far as how Omega came to be a part of the story, Corbett explained, “Very early on in this development process we were talking about how if we were to make a show about Bad Batch how do you challenge Bad Batch because they’re so good at what they do? We set up that they’re these unique soldiers. So, obviously this time period gave us an actual challenge because if they’re not agreeing with the Empire, what that means for them… But it also felt like what would really throw them off was if they had to do something completely non-military like raise a child and be the ones responsible for this kid. Once we really landed on that everything kind of fell into place.”

Corbett added, “It was a way to not only hone in on who Omega is but also her relationship with the Batch gave us a natural in to get to know who they all are, especially through this bond that she has with each of them and all of them being misfits in this galaxy and questioning their identity and where they belong. It’s a fun ride that they go on together.”

The premiere of The Bad Batch established Tarkin as a nemesis for the group and included Saw Gerrera and Caleb/Kanan, while the trailer for the series has revealed that Captain Rex and Fennic Shand are among other characters the group will encounter on their journeys.

When it comes to being able to pull in familiar characters, Rau said, “In this era its exciting because there’s a lot of different people that are flying around. For us, anybody that we bring in, like Fennec, like Saw, like Rex, what we talk about is ‘What makes the most sense for our characters? What’s gonna service our story and the arcs of our characters as they move forward?’”

Rau stressed, “It’s fun playing with the action figures, but we just don’t wanna have it be ‘Throw all the figures in and lets play around with it!’ so we want to make sure any time we have legacy character that it’s really well earned and that we give it the due that it deserves. That being said, without going into details, there are other cameos that we are excited to see.”