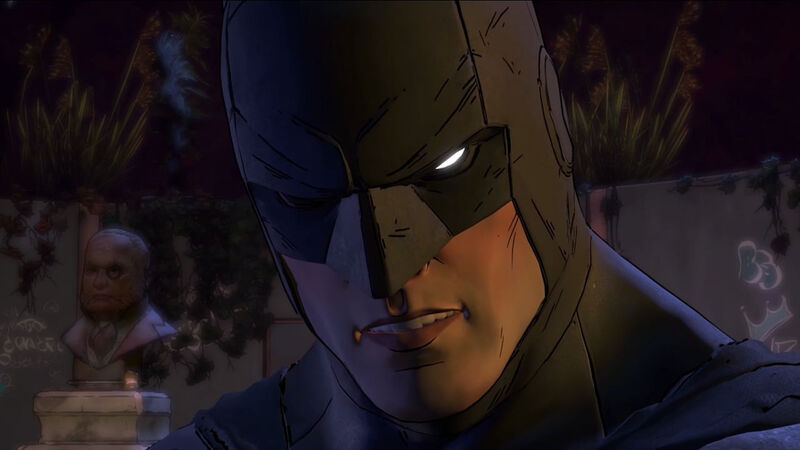 ‘Batman – The Telltale Series’: Secrets From the Episode 3 Trailer

Batman – The Telltale Series has now reached the halfway point. The third of five episodes comes to major consoles Oct. 25, and the mysteries are only getting more complicated. The second episode concluded with Bruce having to choose between helping Catwoman or Harvey Dent. The newest trailer begins right where that ended. Take a look below.

That minute of new footage goes by so fast, there are moments you’re going to miss. So, for the would-be world’s greatest detectives out there, let’s slow things down and take a closer look. Here are the most exciting moments we spotted in the teaser for the next episode of Batman – The Telltale Series.

The previous episode ended with players given a choice between helping Catwoman or Harvey Dent. This trailer seems to follow the saving Selina route, as Penguin disfigures Harvey. As previous clips from Episode 3 have shown, Harvey now looks and is even starting to act like Two-Face. But who will he blame more for his injury: Penguin or Batman?

Things Get Worse for Bruce Wayne

The “truth” was released by The Children of Arkham, and Gotham now believes that Thomas Wayne drove innocent people mad, locking them up in Arkham Asylum. As you’d expect, the Wayne family reputation seems to be forever tarnished. The public embarrassment seems so high that Bruce has been removed from power in Wayne Enterprises. If someone were trying to destroy Batman and Bruce Wayne, this would be part of the plan.

Is This a Random Thug or Somone More?

This moment looks just to be Batman taking down a faceless acolyte of The Children of Arkham. The official synopsis implies that the gang is all over Gotham causing mayhem. Still, if we’re going to dive into baseless speculation, the mask and costume coloring are reminiscent of one of Batman’s famous rogues. Could this be hinting at Deadshot?

First known only to comic book fans, Lucius Fox is now one of Batman’s most well-known allies. Made famous by Morgan Freeman in Christopher Nolan’s Dark Knight trilogy, Telltale’s Lucius seems similar to Nolan’s. Fox appears to be an intelligent, well-dressed inventor, and he’s watching high tech monitors while giving Batman information and guidance. Seems like Telltale got this character right.

Can You Trust Selina?

The above moment is Catwoman handing off something to the Children of Arkham. But is there more to this than it appears? Could she be doing this to get information on them? Is she setting them up for Batman to arrive and beat the crap out of them? Or is Selina not as trustworthy as we’d hoped?

Who the Heck Is This?

This sequence appears to feature the leader of The Children of Arkham, but how’d he get good enough to challenge Batman in a fight? Not many characters in DC Comics can keep up with Batman in a one-on-one battle, so you have to wonder who could be that good. Deathstroke is skilled with a staff, but he doesn’t often take on secondary identities. Perhaps this is someone trained by Ra’s al Ghul’s League of Shadows? Or is this an entirely new villain?

All those questions and more will hopefully be answered in the next episode! Stay tuned to find out, same Bat-time, same Bat-channel!