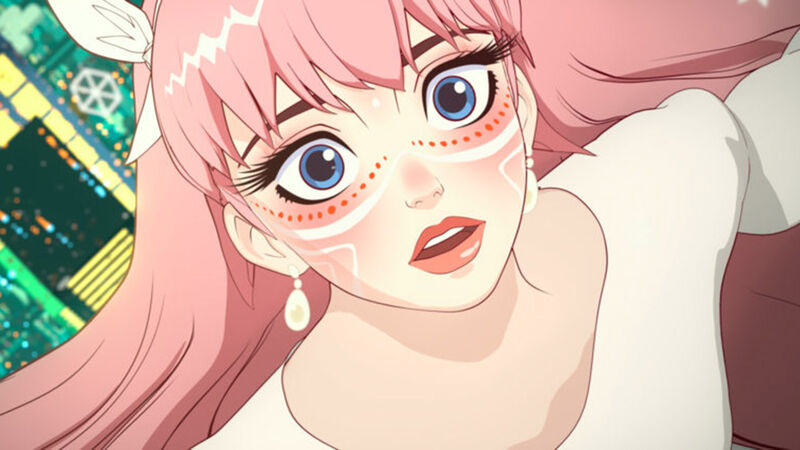 Beauty and the Beast is a beloved tale; one as old as time. Well, 1740, actually. It’s had numerous adaptations over the years since the story was published in its first incarnation by French novelist Gabrielle-Suzanne Barbot de Villeneuve, with Disney as recently as 2017 remaking a live-action version of their animated classic starring Emma Watson in the lead role of Belle. And then there are the countless screen stories inspired by the fairytale. The story, it seems, has plenty within it that has not only resonated across the centuries but that is also still ripe for exploring today. Mamoru Hosoda’s Belle is the latest to take its cue from La Belle et la Bête, and it’s a contemporary, timely, and relevant retelling.

“I’ve been wanting to do an updated version of Beauty and the Beast for 30 years but never really knew how to do it,” celebrated anime director Mamoru Hosoda tells Fandom as we meet in person at the BFI London Film Festival where his film is making its UK premiere. “Then, three years ago I came up with the idea of setting it online.”

Belle reportedly received a 14-minute standing ovation when it exhibited at Cannes earlier in 2021, the longest of any film to showcase. It’s also the first anime film ever to receive five nominations at Hollywood’s Annie Awards, a ceremony that recognises excellence in animated film and television. Belle, which opens in the US on January 14, 2022, is spearheading the rise and rise of Japanese animation in the West. Hosoda’s previous film, Mirai, was similarly groundbreaking, becoming the first non-Studio Ghibli anime to pick up a nomination in the Best Animated Feature category at the Academy Awards.

The film tells the story of a young, withdrawn schoolgirl named Suzu who finds new meaning when she escapes into her online persona and becomes one of the world’s most adored singing sensations. Hosoda says that one of the biggest influences on how Belle took shape was contemporary society.

“The original story of Beauty and the Beast was set in 18th century France. And I wanted to see how values have changed since then, or, indeed, not changed,” explains Hosoda. “Especially when it comes to what beauty means. In Beauty and the Beast in 18th century France, ‘beauty’ is that the character of Belle is beauty as seen through the male eyes of patriarchal society; a feudal society. In theory, we should have a very different view of beauty nowadays. So, I wanted to look at how our idea of ‘beauty’ differs now and who the Belle of today is.”

Beauty and a Benevolent Online World

Today, most of us live second lives online where the conversation of what constitutes ‘beauty’ never lets up and has precipitated a societal change in the images we’re served and the scope of the concept’s definition. It makes total sense that the online world would play a major role in Hosoda’s examination of changing attitudes towards beauty. His approach also allowed him to depict the internet in a more benevolent way than is typical in film.

In Belle, the main protagonist, Suzu, adopts a secret online persona – Bell, who comes to be known as Belle – so that she can reignite her lost affinity for singing within a sprawling and immersive virtual world; an online space not unlike that set out recently by Facebook founder Mark Zuckerberg when launching Meta.

Hosoda’s update of Beauty and the Beast, then, could be seen as science fiction rather than as a modern fairytale. Or even science almost-fact.

“Well, the fact that in the film it’s possible to enter a virtual reality without any kind of goggles, any glasses, is science fiction but actually it seems like that’s going to be something we can do a few years down the line,” says the director. “There’ll be little devices that will enable us to access virtual worlds without a massive headset. So maybe it’s not science fiction. In a few years’ time, it could be our reality.

“Setting the traditional story of Beauty and the Beast against that context gives us a chance to look at what has changed since the 18th century. There’s also a similarity in terms of in the story of Beauty and the Beast, the beast has this duality — you have the violent exterior, and then the kind heart. And there’s a similar thing that I feel with the online world. You have the you who accesses the internet, and then you as you appear online in the social network. I saw a similarity between that and the original story.”

Not only is Belle a look at what constitutes beauty, then, it also delves into identity – which is closely tied to our concept of beauty – as well as the duality of the internet, which exists as a force for both good and bad.

The film introduces a kind of biometric technology to allow users to enter the virtual space of Belle – called U. Hosoda’s creation is based on real-life research that isn’t a million miles away from becoming usable in our everyday lives.

“There is a researcher in Japan, Emi Tamaki,” he says. “They say she’s the closest Japanese scientist to a Nobel Prize at the moment. She set up a company to research body sharing technology. I’ve learned about her research and the scientific evidence behind it and even that could become a reality.”

Hosoda’s U is an extension of what he created for his film Summer Wars, in which there is a virtual world called OZ. The film, made in 2009, depicted a social platform and online space that far exceeded the likes of Facebook at the time.

“That online community had a billion users,” says Hosoda of the fictional OZ. “I found out that Facebook has now got 2 billion users. Reality has overcome the fiction that I created. So I needed a bigger virtual world [for Belle]. This time, I went for 5 billion users. That’s not to say that I was influenced by Facebook at all, or that I condone Facebook, but I wanted to create a completely new and unique virtual world.”

It’s interesting that he feels the need to distance himself from Facebook. The social network is controversial, in part because of its practices and policies and also because of wider fears surrounding social media. So does Hosoda see Belle as a cautionary tale about the internet? The film veers close at times to denigrating the idea of hiding behind an avatar, but also at the same time celebrates it.

“To me, I don’t see it as the real world and the online world; as being real and fiction,” Hosoda says. “They’re both real. Before, we used to live in one single world, now we live in two worlds. I think this is the first time that’s really been shown in a film. And the reason I think it’s the first time is because, up until now, there’s been a real tendency to show the internet as a bad place, and a dangerous, dystopian place; a place where you either leave your humanity behind or where humanity gets twisted. A lot of films show the internet in that way.

“There’s always been this sense that the progress of civilization steals our humanity. And that change is bad. But no one now looks at steam trains and thinks ‘Ooh, that’s bad’. We tend to be worried about new technology, but there really is no need. And I think that’s why the internet gets depicted as bad because people are worried that it’s going to twist our humanity and that social media isn’t part of how we’re supposed to live. But that’s an old-fashioned way of thinking. The internet is part of our reality. It’s a second reality that we are going to have to live with going forward. We’re going to have to live between these two worlds and young people have to learn how to balance these two worlds, and I want to support young people as they try to do that.”

And here’s where the fairy tale part comes in. Fairytales are typically set “once upon a time” and are told as moral or cautionary stories to children. Although they weren’t always only for children, they are regarded today as tales that are recounted primarily for fun but also in order to teach children important lessons and spark their imaginations. Hosoda has a five-year-old daughter for whom he sees Belle as representing a modern, arguably more relevant and accessible take on the fairy tale — set not ‘once upon a time’ but instead in a recognisable society in the near future.

“My daughter is … part of the reason that I made this film,” says Hosoda. “She’s so, so shy and withdrawn and I started to worry how will she manage when she grows up in this new age; when she’s 15, when she’s 20. I really want her to grow up to be a strong young woman. She’s seen the film, she loved it. She loves Belle.”

He adds, “I hope she does grow up like Belle.”

For more from Mamoru Hosoda about the increasing popularity of anime, click on the article below.