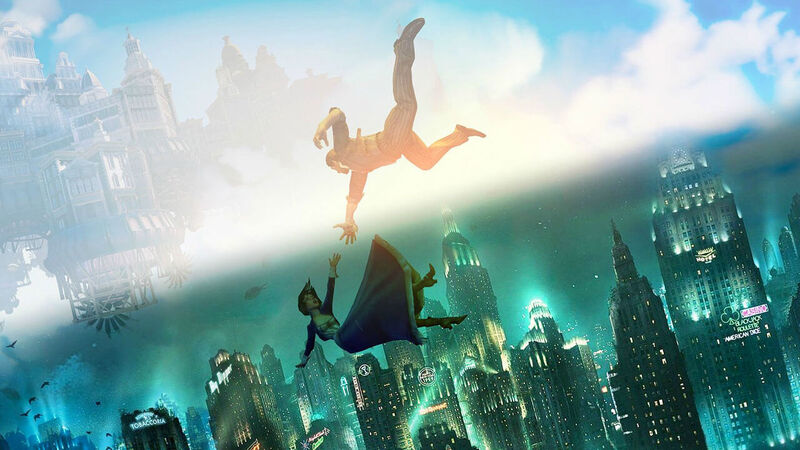 Would You Kindly Read These ‘BioShock: The Collection’ Impressions?

The Bioshock series is one of spectacle, moody atmosphere, and grand set pieces. These set pieces serve to draw you into the worlds of Rapture and Columbia, then offer you a playground in which to utilize a variety of powers and weaponry in ways limited only by your own imagination. As Fan Contributor Travis Newton already explained, we cannot wait to relive some of the most memorable moments of the series when BioShock: The Collection arrives on Sept. 13. I recently visited 2K’s offices to play the game and see what changes and improvements the HD remasters include.

Bioshock: The Collection includes BioShock, BioShock 2, BioShock Infinite, and all of the downloadable content previously available for these games. For completionists, this is the definitive BioShock collection that gathers all of the content from the three games into one place and makes them available together for the first time on the Xbox One and PlayStation 4.

The Collection also includes a series of video commentaries featuring Ken Levine, creative director on BioShock and BioShock Infinite and Shawn Robertson, animation lead on BioShock and animation director on BioShock Infinite. These aren’t what you would think of as commentaries in the traditional sense (as in the voiceover commentary in games like Gone Home). Instead, you have to find a set of Golden Reels within the game, which will then begin the video interview. Here is an example of what one of these videos looks like.

I actually wish that these were more like traditional commentaries because it would be fascinating to hear what the creators had to say about specific moments and areas in the game in context while you are playing. Instead, the videos take you out of the moment as the video takes over your screen. For a series that is all about immersion, this sudden disruption to your gameplay experience can be quite jarring.

The Museum of Orphaned Concepts that was previously exclusive to the BioShock: Ultimate Rapture Edition collection appears here. This museum-style walkthrough level includes concept ideas that didn’t make it into the original BioShock. It is fascinating to see how many of these ideas evolved over time. Some of those that didn’t make the cut for the original game eventually made it into BioShock 2 in one form or another.

The developer, Blind Squirrel, has given everything in BioShock: The Collection a fresh coat of paint. All three games include new and improved textures and art assets. This goes beyond just a simple texture swap, though. In fact, in some places, Blind Squirrel gave the game the “George Lucas treatment,” adding sea life and other elements to the environments. This breathes new life into these once-familiar areas. The iconic opening sequence of BioShock, where you first see Rapture from inside the bathysphere, is the perfect showcase of the improvements you can expect in BioShock: The Collection.

As you would imagine, since BioShock is the oldest game in the collection, it has also received the most attention graphically. This seems to be where the developers spent most of their time cleaning up the outdated textures, updating the lighting effects, and adding new objects to the environments. Their hard work paid off, and the game looks as good as any new release this year. The decrepit, tragic world of Rapture has never looked so beautiful, and the enemy Splicers and Big Daddies come to life in frightening detail.

BioShock 2 looks just as good, which isn’t too surprising considering the similar setting of the first two games. BioShock Infinite has also never looked better, but due to the relatively young age of the game compared to the other two, and the stylized, almost cartoony look of the characters and world, the improvements are much less noticeable.

The following trailer shows the graphical upgrades made to all three games.

One nice-to-have feature I wish the game included is a button that lets you toggle between what the original game looked like so you can compare that with the remaster in real time. This was something THalo: The Master Chief Collection used to great effect that really helped drive home the amount of work put into remasters such as these.

All three games will also run at 1080p and up to 60FPS. (Side note: Does anyone else find it weird that a developer with the word “blind” in their name is responsible for improving visuals?)

I got to play parts of all three games, and fans of the originals will be happy to know that the gameplay hasn’t changed one bit. They control just exactly as you remember. This is both good and bad, since in many ways narrative first-person shooters have evolved in leaps and bounds since the original BioShock came out back in 2007. If you’re like me, it may take a while to come to terms with the fact that there isn’t a sprint command mapped to L3. This is a common feature in FPS games nowadays — including the more recent BioShock Infinite.

BioShock: The Collection is the definitive way to play all three BioShock games. It is also the only way to do so on all in one place on current-gen consoles. For those that have never played any of the BioShock games, or may have missed one or two (or perhaps some of the DLC), this is a great way to go back and experience this groundbreaking series for yourself.

BioShock: The Collection will be available for PlayStation 4, Xbox One and PC on Sept. 13, 2016.