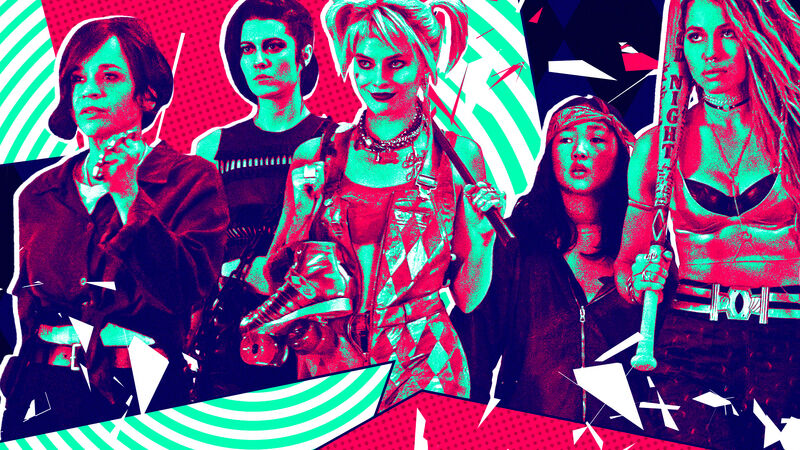 Birds of Prey takes you into the scattershot mind of Margot Robbie’s Harley Quinn after she’s dumped by her long-time love, Joker . In the wake of the break up, Harley finds herself targeted by everyone who was once too scared to go after her, including Ewan McGregor’s violent, masked man-child, Roman Sionis .

A raucous, riotous ride, Birds of Prey was scored by Daniel Pemberton, who knows a thing or two about vibrant and colorful comic book films as he also did the music for 2018’s Spider-Man: Into the Spider-Verse. This time around though, the story’s central character is a uniquely impulsive anti-hero who sees the world through a skewed lens.

With Birds of Prey’s instrumental soundtrack dropping out today — the song soundtrack was previously released — Fandom spoke to Pemberton about how Harley’s personality and fashion sense informed the musical style, the importance of blending the score with the songs (which he also did for Spider-Verse), and coming up with individual themes for the Birds of Prey team.

“Cathy [Yan, director] wanted to make this not feel like every other superhero movie,” Pemberton said. “That was one of the things that got me instantly intrigued by the project. Then I watched a whole bunch of what they’d done and she explained what she wanted was this to be a Gotham City like we’d never seen before. In the day. With a crazy color scheme. I loved that vibrancy and the crazy energy of the movie. I think Harley is super exciting to write for because there are so many different aspects to her personality. I felt that musically we should embrace that.”

“I’ve got this line I always say,” Pemberton continued, “that Harley could go anywhere, and be into all sorts of music. I could see her at the opera. I could see her in a mosh pit, like at a Rage Against the Machine gig. I could see her at a rave jumping around like crazy. At a jazz club. She could be anywhere and there aren’t really any other comic book characters like that. I kind of wanted her music to feel like all of these influences all jammed together. I wanted the music to be like her outfits, sort of crazy and out-there. Slightly mismatched styles that just happen to work together.”

Birds of Prey is also filled with a number of songs, from Charlotte Lawrence’s “Joke’s on You” to Maisie Peters’ “Smile,” and Pemberton was excited to mix his score up with the playlist.

“I co-wrote [“Joke’s on You”],” he explained. “I scored that scene which is at the beginning of the film, at Ace Chemicals . I’ve always been keen at really blurring the lines between songs and scores. Because right now they seem very disparate. You’ve got the songs in a movie and then someone else working on a film score when really those two worlds should be working together in tandem. So I was pushing for that quite a lot. So ‘Joke’s on You’ really came from that. I wrote with this other songwriter named Imad [Royal] and we turned that into a song. The score was just the instrumental part of the song and we worked together to give it lyrics and turn it into a track. That hopefully makes it feel really fresh. Like, it only exists in Harley’s world. We did a bit of that a bit in Spider-Man, but that was me really orchestrating over one of the songs.”

That moment in Into the Spider-Verse, where the score and “What’s Up, Danger,” by Blackway & Black Caviar, merged, proved to be one of the most powerful scenes in the film – when young Miles Morales suited up swung through the Manhattan cityscape for the first time.

“That was really crazy how that came about,” Pemberton shared. “I almost wrote that entire part in one take in the studio at Sony. I was like ‘Why don’t we try putting this on top of it?’ and the music head is just standing there and the she’s like ‘this is cool’ and I said “I can just build it up and build it up until we reach this climax’ and then we got to the end and we looked at each other and were like ‘f**k.’”

“I said ‘that was quite good, wasn’t it?’ and she said ‘f**k, that was amazing.” And she asked “did you record that?” and I was like ‘no” and she went ‘s**t!’ I was like ‘I’ll do it again’ and fortunately I remembered everything I played and it all ended up in the film.”

The Family That Preys Together…

Birds of Prey might document Harley’s violent emancipation from Joker, but it’s not a solo outing. Along the way, Harley collects a ragtag team of outsider friends, and they all come with their own special musical themes as well. “I think Harley’s energy exists throughout the film, but obviously you’ve got different characters too and so sometimes you’re stepping back and bit and looking at them” Pemberton said.

“Like Huntress is a good example,” he added. “Huntress has got that little flute riff and that becomes the theme for her backstory. Roman’s got these uncomfortable strings. Black Canary ‘s got a distinct whistling tune. The thing about this film is that there are so many characters and so many different elements that I think Harley’s the dynamite that sets it all off, like an explosion.“

Harley’s theme features different stylings, from industrial metal to operatic crooning. “I feel like there’s a side to Harley that’s, naturally, really crazy,” Pemberton mused. ‘Strong and elegant, but also crazy. And I love, like, mad opera vocals for that because opera is both beautiful but also completely nuts. Like, when you go up high it’s so over-the-top. I wanted that for Harley because I love the way she’s beautiful and f**ked up and twisted, but also really strong and delicate at the same time.”

“I felt that sound paired with like a 60s track, a rock track, really worked. I love shoving things together that shouldn’t work but do. Even when she’s breaking into the police station, we’ve got Harley’s theme there and then I worked with this hip hop artist, Jucee Froot, to turn that into a song. So you’ve got another different take on her theme, which you hear several times through the film. Like at the end when she’s on the roller skates and she kicks ass and you’re like ‘Yeah!,’ because you’ve heard that theme a number of times. Hopefully you hear that music now and you know within a few seconds that it’s Harley Quinn. And that’s what I was trying to do with the movie.”

Because Birds of Prey features many montages, asides, and “Oh, I forgot to tell you” moments, due to Harley’s haphazard narration, Pemberton often had to create very short themes for big moments. “When you don’t have a lot of time, you have to find a way to make those seconds count so you can remember a character,” he said. “Huntress is a good example because the first time you meet her you don’t really know who she is. She’s just someone on a motorbike, who just shows up. It was really important for me to give her a sound that intrigues you and has an element of mystery, but also that you’d remember when it comes back later.”

Working in TV for many years helped tremendously here, according to Pemberton. “It taught me how to write things that would catch your ear very quickly, because you’d only have five to 10 seconds to do a theme. That was always good training.”