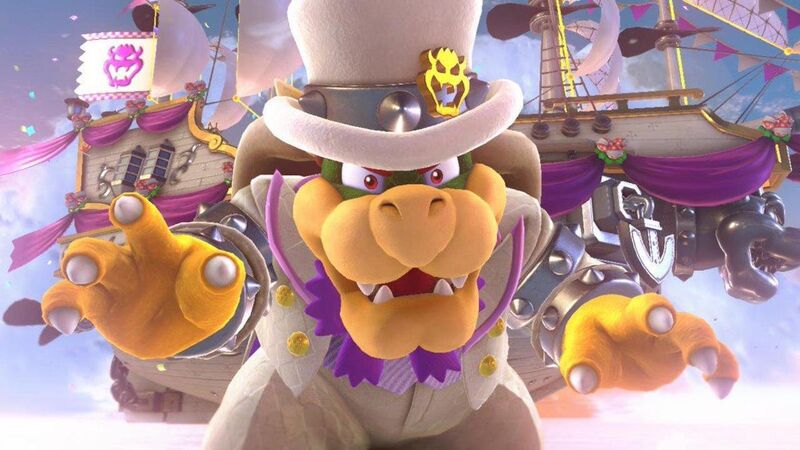 Bowser at 35: All Hail the King of ‘Super Mario Bros.’

For the last 35 years, Super Mario Bros. has blessed our homes with the side scrolling platformer that we all crave. We’ve jumped, ground pounded, Fire Flowered & sacrificed Yoshi to make a jump in order to reunite with the Princess time and time again. Mario is “The Guy” when it comes to gaming and Nintendo has pulled out all stops to make the 35th anniversary of the classic NES game memorable. With roll-outs like Super Mario Bros 35 Battle Royale, Super Mario 3D All Stars, a talking “It’s-a Me, Mario” Action Figure, an Augmented Reality Mario Kart Game and so much more, it seems like 2020 has just been one big birthday bash for our favorite Plumber. But something, or someone has been overlooked in the celebration.

Keep in mind that while Super Mario Bros. came out in 1985, Mario himself is actually creeping up on the big 4-0 since his official debut was in Donkey Kong in 1981. And yes, Mario is incredible! You see him and you immediately know you’re going to have a good time. You discover new worlds and can’t help but to get this wholesome feeling when you’re jumping as the Italian plumber. But this year also marks the official 35th Anniversary for some of the biggest names in the Mario franchise beyond the title character and there’s one in particular without whom Mario would be lost. He’s the ongoing Big Bad in the Mushroom Kingdom and the ultimate motivator for Mario to jump on Goombas, Koopas and Koopalings. You all know him, you love him, or you love to hate him. He’s none other than King Koopa himself… Bowser!

Bowser, AKA King Koopa, AKA The Great Demon King, is the Jelly to Mario’s Peanut Butter, the Joker to Mario’s Batman, the Rainbow to Mario’s Rainbow Road. And although his storyline could be called “formulaic,” there’s still plenty to love about him. So step aside Mario, we know this isn’t your “Real Birthday,” but it most certainly is Bowser’s and there are a ton of reasons why we should be celebrating him.

Time to settle into your Clown Cars and Airships, it’s Bowser’s birthday too and it’s time we take a deep dive & celebrate 35 years of the King.

According to the “Game Description” in the original Super Mario Bros. Instruction Manual, the Koopa, a tribe of turtles famous for their black magic, had invaded the Mushroom Kingdom turning all the mushroom people into stones, bricks and field horse-hair plants (whatever those are). The only person who could undo the spell was Princess Toadstool who had been captured by King Koopa.

In terms of tactics in the main Mario series, this is a pretty solid plan! From the get-go, we get a sense of Bowser and his strategy to rule the Mushroom Kingdom with an iron fist. When “kidnap and run” doesn’t work, Bowser takes the fight directly to Peach’s Castle in Super Mario 64, using the Power Stars to trap the Toads and Peach within worlds he created in the castle’s paintings. If no one’s in the castle, then it’s his for the taking! Later games in the series, such as Super Mario Odyssey, give him a different justification for kidnapping the princess, but with the same end goal. If the Princess and Bowser were to wed, then they can unite and rule the Kingdoms together!

In Super Mario Galaxy 1 and 2, Bowser steals the powers of the Power Stars in order to create his own Galaxy at the center of the Universe and to build his Galactic Empire and be its ruler with Peach by his side. And in Yoshi’s Island DS, Bowser travels back in time (how??) to find the 7 Legendary Stars that are said to be within the HEARTS OF A FEW BABIES (what??!), which, when gathered, can give someone the power to rule the Universe.

Phew! This Koopa is crazy busy and has some truly wild schemes. But Bowser isn’t just an ideas-guy. He is often on the front lines with his many minions, leading and defending from within his many Castles and Airships on the battlefield, side by side with his many Koopalings. When the barricade falls, you can count on Bowser to hold the line. He defends the innermost room from being breached by the nefarious Mario. Blasting Fire Balls, Ground Pounding, throwing hammers and even summoning Meteors, he’s a Koopa who gets what he wants!

Ruling the universe is fine and dandy for a single bro, but it’s got to be extra tricky when you’re a single dad.

Before we dive into the chaos of the Koopalings (AKA The Koopa Kids) we must make one thing clear: As of 2012, Shigeru Miyamoto, the creator of Super Mario Bros, had declared that in the current story of Mario, the Koopalings are not Bowser’s children, but his underlings. This means that canonically, Bowser Jr. is his only child. That aside, we would debate that though he isn’t their biological father, Bowser is clearly an authority figure to the other 7 Koopalings, who all look up to him and dream of ruling a kingdom like “his” one day.

They want to be like the King? Well, they get their chance! We see throughout the Super Mario Bros series, starting with Super Mario Bros. 3, that Bowser gives the Koopalings an opportunity to get their foot in the door with Airships and Castles. Nothing better than a hands-on learning experience! It’s through these leadership moves that we get to see a softer side of Bowser. He allows them to try their best to hold a world, fail, readjust & try again with a different tactic. He’s a good papa!

In Super Mario Sunshine, we are introduced to King Koopa’s child, Bowser Jr. Here, Bowser lies to Jr. saying that Peach is his biological mother and Mario kidnapped her. Bowser Jr. then poses as Shadow Mario to frame Mario for graffitiing all of Isle Delfino which in turn gets Mario thrown in jail and doing community service, where he has to clean his mess with Professor E. Gadd’s invention: F.L.U.D.D. Bowser Jr. then kidnaps Peach and takes her back to Corona Mountain where Bowser Jr., Bowser, and Peach can enjoy their “Family Vacation” in the volcano’s giant hot tub filled with green water. It’s weird, we know. But it goes to show the lengths Bowser will go to give his son something he’s never been able to give him before: a mom. Even though Bowser confesses to Jr. that he lied about Peach being his biological mother, we learn that Jr. knew the whole time, and that it didn’t matter, because one day, Jr. is going to beat Mario.

Outside of the confines of the main Super Mario Bros. series, we often get to see something a bit different from Bowser, which only adds to what makes us appreciate him. Multiple Mario RPG Series (Legend of the Seven Stars, Paper Mario, and the Mario & Luigi RPG) all give a similar voice to our fire breathing Bad Boy. That special sauce being: Humor. All of the Mario RPGs give Bowser some of the funniest lines of dialogue and slapstick comedy that we ever get to see in the entire Super Mario franchise. In the RPG setting, we get to see Bowser talk a lot more than we would in the regular series. Some characteristics we discover through the gift of extended dialogue really exploit Bowser’s ego as a weakness. He usually gets outwitted by the game’s Big Bad in the RPG games, sometimes even by a bad guy using Bowser’s plans but doing it a bit better. These moments really show how easily jealous and competitive Bowser is. Not only that, we also get moments where we see that Bowser’s plans are sometimes from his underlings – like Kamek the Magikoopa – who will suggest an idea and Bowser will claim it as his own.

His naivete and singular focus on one goal at a time tend to lead him to team up with – and often being ultimately outplayed by – his nemesis, Mario.

These are some really fantastic moments in the Mario series where we get to see a bit of the behind the scenes of what Bowser truly thinks of the mustached plumber. When they find themselves in trouble, he’ll sometimes even ask Mario for help or admit that Mario would know what to do. It’s almost as if they’re the most excellent of Frenemies.

Within the RPG Party, Bowser serves primarily as the “Tank,” having high defense and dealing heavy damage to opponents, but with a low attack speed. In Paper Mario: The Origami King, Bowser is stapled as a folded piece of paper. Once he is unstapled at King Olly’s castle, he is given Origami Power from Olivia, which transforms him into a giant origami version of Bowser. Yes, the paper frenemies team up and it’s awesome.

But despite Bowser’s multiple alliances with Mario, he still can’t seem to get an invitation to the party. Not in Mario Party, and certainly not for Mario’s 35th.

It’s not easy being mean. It stinks to not be invited over for your friends’ Mario Party game night but imagine if Mario Party was actually in your universe and you weren’t invited? That’s cold, A-Mario. We can’t help but feel a soft spot for Bowser. You’d think the Mushroom Kingdom crew would figure out that Bowser just doesn’t want to be left out. Outside of some minigames or a round of Mario Party 10′s“Bowser Party,” Bowser is not a playable character in regular rounds of Mario Party. Once again, he’s the antagonist. Stealing a Star Rod from the Star Battle Arena, stealing Mini Stars to decorate his own Castle, and even inviting Mario over for an “Apology Party” only to lure Mario into a trap that shrinks him down in size.

Look, if all this doesn’t scream “I really wish I had some friends but everyone is hanging out without me!!!!!” then we don’t know what does. The Mario team just needs to give ol’ Bowsey a chance. Bowser has proven himself in many other areas that should give him an opportunity to party with the rest of the Mushroom Kingdom. He’s an excellent Kart racer and great at oh-so many sports after all, including soccer, golf, tennis and baseball.

To sum it all up, Bowser rules! He’s the big bad to beat, with a sense of humor and a heart for those who give him a chance to be who he is on the inside: just another Koopa lookin’ for love in all the wrong places. Nintendo keeps on finding new ways to make him fresh and interesting in all genres of gaming and we can’t wait to see what they’ll do with him next.

As Junior Boiii put it on Fandom’s Mario wiki, regarding Bowser, “I think he really stands out as a loveable villain who will do everything he can to reach his goals. He develops personality, can be humorous sometimes, and he is a good father for Bowser Jr, despite having such evil plans. We’ve seen him tired, crying, laughing, fighting, every side of him.”

Here’s to you, King Koopa! May you continue to dream big aim for the day you’ll stop that Mario.

Matt Acevedo
TheMattAcevedo
Matt Acevedo is a producer, writer, gamer & comedian in Los Angeles. You can find him on Nintendo, Funimation, Oh My Disney, Nerdist, HyperRPG & more. He hopes to one day be "King of the Pirates" & convince his landlord to lift his "Puppy Ban."