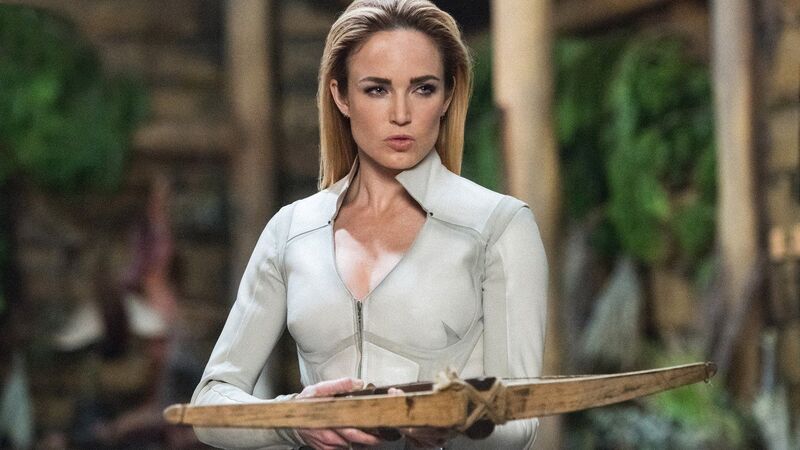 Why Sara Lance Is a Breakthrough Bisexual Superhero

The Arrowverse is arguably one of the most cohesive universes on television. This super-verse has been telling compelling and engaging stories since Arrow premiered in 2012, and has continued to do so through additional shows like The Flash, Supergirl, and Legends of Tomorrow.

One thing the Arrowverse does well is tell stories that include diversity and fluidity in sexuality, specifically the bisexuality of Sara Lance. It’s uncommon that a network would depict certain character’s sexuality so openly, but the The CW has continually gone above and beyond to accurately portray, defend, and celebrate Sara Lance’s bisexuality.

The Arrowverse is home to a variety of gay and lesbian characters, like Curtis Holt, Captain Singh, Leo Snart from Earth-X, his husband The Ray, Alex Danvers, Maggie Sawyer, Ava Sharpe, and Nyssa al Ghul. So far, the only openly bisexual character is Sara Lance, as played by Caity Lotz. She is a rare character in the realm of superhero media because a lot of superhero shows and films engage in what’s known as “queerbaiting” — the practice of hinting but not depict a queer relationship on screen.

Queerbaiting most recently took place in two separate Marvel films: Thor: Ragnarok and Black Panther. Marvel presented viewers with a canonically bisexual character, Valkyrie (Tessa Thompson) in Thor: Ragnarok, only to cut scenes from the film that were intended to express her sexuality as such. Similarly, actress Florence Kasumba revealed there was a deleted scene featuring a flirtation between her character, Ayo, and Okoye (Danai Gurira) in Black Panther. FOX also continues to engage in queerbaiting by ignoring Deadpool’s canonical pansexuality, only to vaguely reference it in the movies when part of a joke.

But Marvel is not the only perpetrator of queerbaiting infractions. In 2007, author JK Rowling announced to fans that Dumbledore was gay, opening the door for post-story labeling. The tactic of after-the-fact queering has become an increasingly common — and annoying — new fad. This has been done most recently in Solo: A Star Wars Story.  Screenwriter Jonathan Kasdan told HuffPo that Lando Calrissian was pansexual, but the film did not depict any version of this narrative.

According to CNN, in a 2016 study, more people identified as bisexual than the combined number of people who identified as gay or lesbian. The idea that people are attracted to multiple genders is not a new one, but for some reason television has been stagnant in representing these people accurately. Luckily, Sara has come along.

While the term “bisexual” is often used to mean someone who is attracted to men and women, bisexuality, in general, can be very fluid. In Sara’s case, she may at times prefer women, but that does not negate her bisexuality, nor does it negate her attraction to men. Additionally, it is also very possible that she could find herself attracted to non-binary or trans people, were she to come across them on her adventures. This would open the beautiful door into Sara’s pansexuality.

Sara Lance’s story began as a tragedy. 5 years before Arrow began, Sara was sleeping with her sister’s boyfriend Oliver Queen (Stephen Amell). The pair of them were caught in a storm and Sara was presumed dead. Sara was discovered by Dr. Ivo in the South China Sea, reunited with Oliver, but then presumed dead again! She was finally rescued by  Nyssa al Ghul (Katrina Law), who trained her to become an assassin and eventually became her lover.

When Sara returned to Star City, she rekindled her romance with Oliver, only to be killed for real. Thankfully the Arrowverse deals in resurrections, because Sara was brought back to life, her soul was restored, and she transformed from the Black Canary to the White Canary. She eventually left Team Arrow and became the Captain of the Waverider on Legends of Tomorrow, traveling through time, and diving head first into exploring her bisexuality.

Assuming that she needed a break from heavy, serious relationships — after Oliver Queen and all his drama, who wouldn’t — Sara began traveling through time with the Legends. During this time, she had a few short-term relationships and one-night stands, almost exclusively with women. Even in Arrow’s 100th episode, Sara, in a group hallucination of an alternate timeline, revealed to her sister that she prefers girls. But, as most recently as Season 3, she had a fling with Constantine (Matt Ryan), so she is definitely sexually fluid.

Sara welcomes the exploration of sexuality, bisexuality, fluid sexuality. Sara is a character who started a conversation that was long overdue. Bisexuals aren’t as Carrie Bradshaw put it in Sex And The City just “a layover on the way to Gaytown”. And, with Sara’s unabashed sexuality being genuinely portrayed, she created a safe space for the Arrowverse to delve into something less shown: an openly bisexual man like Constantine. Hopefully his sexuality can be explored on Legends Season 4, since Constantine is joining the cast.

Legends of Tomorrow will return to The CW Mondays, this Fall.

Yael Tygiel
Yaeltygiel
Yael (who prefers it pronounced Yell) is a tv addict, nerd, and proud plus size host. She can be seen on FANVERSATION, AfterBuzzTV and at ComicCons around the world. Her words have been on POPSUGAR, Starry Mag & FANDOM. ​ When not watching TV for work, Yael can be found watching TV for fun