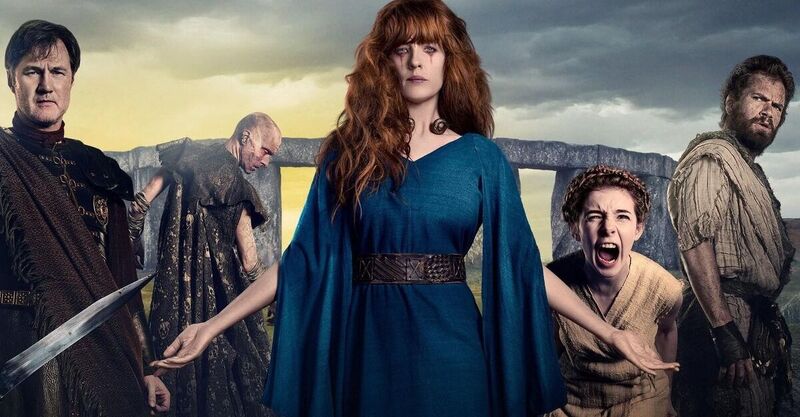 ‘Britannia’: Everything You Need to Know Before Season 2

Mix a bit of history, a touch of fantasy, the Donovan song “Hurdy Gurdy Man,” and a whole lot of trippiness and you’ve got Britannia – an uncanny and unpredictable saga about the Romans’ attempt to conquer the Celts in the British Isles in AD 43.

Or as Rob Savage, director of Shudder’s acclaimed film Host, describes it to Fandom, “It’s Game of Thrones on mushrooms.”

“It’s bonkers and it doesn’t make a lot of sense and it’s all the better for it,” Savage, who directed three episodes of Britannia’s second season, said of the series. “It’s like a strange acid trip that’s really funny and really violent and doesn’t follow historical accuracy in any way. If you go with it, you’ll have a lot of fun with it.”

With Season 2 of Britannia kicking off October 4 on EPIX, we’ve crunched all nine episodes of the first season down into a lovely cheat sheet to catch you up.

The Walking Dead’s David Morrissey plays Roman invader Aulus Plautius, a man convinced that fate and fortune are on his side during Rome’s second attempt to subjugate the British lands Caesar had to flee from almost a hundred years earlier. Aulus, a master tactician, often knows that blood need not be spilled if he can negotiate terms with his enemies. So long as said enemies agree to become Roman subjects and pay their taxes.

Aulus arrives with a vast army, his second-in-command Lucius (Hugo Speer), and the viscous Vitus (Gershwyn Eustache Jnr), a soldier who tried to abandon the mission but was given a second chance when he killed the others who also tried to flee.

Aulus keeps much of his plans a secret, even from Lucius. As he attempts to negotiate deals with the leaders of the Cantii and Regni — King Pellenor (Star Wars’ Ian McDiarmid) and Queen Antedia (Zoë Wanamaker), respectively — in an effort to avoid an all-out war (while also turning the tribes against each other even more) it becomes apparent that what Aulus is truly after are the Druids. And the land’s magic.

By the end of Season 1, Aulus has killed off Lucius (and promoted Vitus) after his trusted number two began to suspect there was more to Aulus than meets the eye. In fact, Aulus just might be the physical incarnation of the demon Lokka. And what he might be chasing after all is a girl with blind father. A girl that a certain prophecy says will save everyone from the Romans.

The mystics of the lands, those who communicate the will of the Gods — aka the Druids — are led by Veran (The Office’s Mackenzie Crook), who is said to be over 10,000 years old. Believed to be the second human to ever set foot in the world, Veran and his people pull the strings behind everything happening in the warring kingdoms. Some, like the Cantii and King Pellenor, obey without question. Queen Antedia and the Regni, however, would love to see the Druids erased from the game board.

Veran once told Pellenor that his wife, the Cantii Queen, was to be flayed alive as a sacrifice. Pellenor obeyed and afterwards there was a huge rift between Pellenor and his daughter Kerra (Yellowstone’s Kelly Reilly), who then grew up to be a skilled warrior and outcast.

King Pellenor thinks so much of the Druids, in fact, that when he brings Kerra to see them, in Season 1, because she went behind his back to broker a deal with Aulus, he accepts his fate when Veran tells him that he is to be sacrificed to the Gods, and not her.

After Pellenor’s death, the “Gods” anoint Kerra as the new Cantii Queen, much to the dismay of her brother Phelan (Julian Rhind-Tutt), who takes the news so hard that he runs off with a Regni prisoner named Ania (Liana Cornell), who claims to actually be Brenna, the goddess of war. After a trek together, and Ania becoming pregnant with a child she thinks will be a God, the two visit with Veran and learn that Ania’s ideas about being Brenna’s avatar are false.

Remember the prophecy about the girl with a blind father? Or, more specifically, as Veran says, “Hope is the small daughter of a blind father.” Well at first Kerra thinks it might be her. When Veran crowns her ruler after her father’s rather unpleasant ritualistic death, she thinks she might be the “hope” the land requires (with her father being metaphorically “blind”).

As it turns out, the “hope” is young Cait (Eleanor Worthington Cox).

The Romans raided Cait’s Cantii village during her Solstice initiation into womanhood – leaving her in a type of existential limbo where she doesn’t have an adult name. Her sister is killed in the attack and her father is taken prisoner (and later blinded by Lucius). Cait, running for her life, is saved by an outcast Druid named Divis (Nikolaj Lie Kaas).

Cait and Divis’ relationship is uneasy at best, with Divis, an exiled seer with a powerful connection to the underworld (and a penchant for getting possessed by Lokka’s serpent minion, Pwykka) is all consumed with uncovering Lokka’s evil plot and human form. Which leaves little room for him to care about anyone else, especially Cait.

Cait and Divis weave in and out of each other’s orbit during Season 1, but by the end it becomes clear that she’s the so-called chosen one and he’s destined to protect her. Once Kerra realizes that Cait represents the hope of the land, and not her, she helps Cait and her father escape Aulus, sending the scared child on the run again. This time though, with Divis attempting to help Cait discover her own inner divination powers.

Britannia also includes other members of the Cantii and Regni people. Over the years, efforts were made to try and broker peace between the feisty tribes through marriage. They tried to marry Kerra off to Antedia’s son, Gildas (Joe Armstrong), but she castrated him on their wedding night.

Now, Lindon (Stanley Weber), of the Gauls, is in the Canti court as a husband to Annabel Scholey’s desperate and scheming Amena – who also happens to be Phelan’s wife. Yes, Amena has two husbands, for the sake of peace, and Phelan’s none-too-happy about the situation. Especially the fact that Amena enjoys Lindon’s company in the bedroom more.

Then Lindon starts up an affair with Kerra, though his loyalties are constantly in question because he’s secretly a spy for the Regni clan. A service that works to undo Kerra and her brief reign in the end.

The politics and backstabbing elements of Britannia, in Season 1, aren’t as much of a focus as the loftier God conflicts but they’re indicative of an island divided. One that was ripe for the taking because the Cantii and the Regni were at each other’s throats so much that they didn’t even see the Romans coming.

Where We Left Off

In the Season 1 finale, Aulus’ long-standing siege of the Cantii’s citadel, which started after Kerra helped Cait and her father escape, finally succeeds when Lindon, on Antedia’s orders, burns the castle’s food supply. This forces Kerra to go to Aulus and make nice in an effort to stop the Romans and the Regni from killing everyone.

After Aulus makes a showy display of betraying the Rengi army in front of Kerra, having them all slaughtered (and Antedia taken prisoner), Kerra tries to end Aulus with a blade. It backfires and Aulus kills Kerra and rips her heart out. Aulus then installs Amena as the Cantii Queen.

After a bounty hunter — who also might be a hellhound — captures Cait and injures Divis, Cait is handed over the Druids, rather than Aulus. So now Cait, and Divis (who recovered and also made his way to see Velan), are captive “guests” of the Druids, trapped in the Druids’ domain. Divis, who begged Velan to tell him the future lets Cait know that he knows what’s going to happen next.

What Lies Ahead in Season 2

The ten-episode Season 2 takes place two years into General Aulus Plautius’ invasion of Britannia. Aulus is busy Romanising willing Celt tribes with the help of Celtic Queen Amena and crushing those who try to resist.

Aulus’ behaviour raises suspicions that he has another agenda; one that raises ghosts in Amena’s past and makes his threat to the Druids ever more critical.

The only form of hope for the Druids and Celts is Cait, who’s now being trained by Divis to fulfil a prophecy that would save Britannia from the Romans.

Meanwhile, two Druid brothers — Veran and Harka (known as “The Dead Man,” and also played by Mackenzie Crook) — begin an epic battle of wills that divides the Druids and puts the prophecy in jeopardy.

Joining the cast of Season 2 is Steve Pemberton, who will play Emperor Claudius, who travels to Britannia to witness Aulus’ triumph.