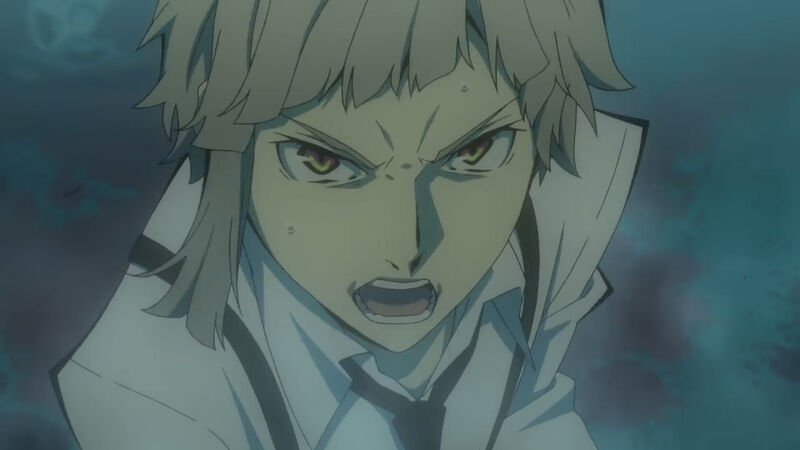 Bungo Stray Dogs: Dead Apple takes fans back to Yokohama to solve a new mystery that takes place six years after the Dragon’s Head Rush Conflict, the bloodiest 88 days in the history of the city. The incident may have ended but the man behind it, Shibusawa Tatsuhiko (aka “The Collector”) has reappeared along with a mysterious, deadly fog.

Whenever the fog rolls in, it leaves behind gifted who appear to have been killed by their own powers. Naturally, the Armed Detective Agency is asked to investigate the puzzling deaths. Unfortunately, before they can track down The Collector, he releases the eerie green fog in their hometown of Yokohama. The citizens of the town mysteriously disappear, leaving only the gifted behind. Now powerless, the gifted from the agency must conquer the darker sides of themselves — their powers in physical form.

Bungo Stray Dogs: Dead Apple doesn’t waste any time setting up the story. Instead, the film plunges viewers into a dark, seedy city full of bloodshed. The opening sequence sets the bar high. Audiences are treated to a high octane battle full of gore, motorcycles stunts, and powerful gifted attacks. It’s an epic battle that sets the tone and gives the film a bit of historical context.

Unfortunately, this context isn’t quite enough to orient those unfamiliar with Bungo Stray Dogs. Outside of a clunky attempt to quickly summarize all the major series players in the opening theme, the film doesn’t do much to welcome new viewers into the fold. It jumps right into the story, assuming that viewers will pick things up along the way.

To a certain extent, this works. Instead of trying to fit the anime’s large ensemble cast, Bungo Stray Dogs: Dead Apple focuses on Atsushi Nakajima. The most timid member of the agency, Atsushi spends much of the film doubting himself and trying to avoid confrontation. It’s obvious that Atsushi has the most growing to do of all the characters we meet along the way. But why he needs to grow isn’t clear to those who haven’t seen the show.

Like the others, Atsushi must confront the darker side of himself — by battling his powers in physical form. The battles themselves provide a great vehicle for character development. But the film doesn’t linger on these poignant moments long enough. Instead, it teases us with character backstories and mysteries that the film’s main narrative overshadows, such as Dazai‘s, a member of the agency, connection to the villain Shibusawa Tatsuhiko.

This technique might’ve worked better if the main plot worked as a cohesive whole. But it doesn’t. The motivations of the villains (yes, there are technically three of them) don’t make much sense. Sure, there’s an overly complicated conspiracy woven into the story that supposedly explains their need to work together. But it feels random and forced. It might be more accurate to say that a bunch of untrusting evil masterminds got bored and hatched a plan. Just for fun, they decided to test an experiment that would leave the world in peril, all while trying to outwit each other.

The tenuous nature of their alliance makes you question why they even formed it in the first place, especially when they don’t seem to have a common goal. Surprisingly, it’s the dramatic, battle-heavy moments that offer the most characterization, like when we learn how Kyōka controls Demon Snow. Not the quiet moments filled with witty dialogue between the antagonists.

In fact, the intricate narrative requires such a leap in logic that it’ll leave viewers grasping for something tangible to ground themselves. There are too many agencies and alliances to keep track of for a newcomer. That’s why it’s so frustrating when great storylines involving individual characters manifest only to quickly dissipate to make room for the anime’s flimsy main story.

Storylines like Kyōka’s complicated relationship with Demon Snow following the death of her parents or Atsushi’s past at the orphanage could’ve been their own movies. But because the film glosses over such important moments, we’re left with character arcs that are only somewhat fulfilling. Without a firm grasp on where they’ve been, we lose the meaning behind a character’s growth.

A Standout Character in an Ominous City

Outside of the uninspired villains and the main storyline, Bungo Stray Dogs: Dead Apple is still an entertaining story. The soundtrack is a delicious mix of opera-like dramatic moments, tense piano melodies, and rocking guitar-saxophone hybrid tunes that give Persona 5 a run for its money. Paired with the anime’s excellent use of color — scenes are bathed in hues of greens, purples, and blues — the score heightens the dark, ominous tone of the film.

Not to mention, the animation is great. The fog that rolls through the city looks so real, you half expect it seep into the theater as you watch. The battles are seamless and provide a great distraction from the film’s main plot. We learn a bit more about each character. We also get to see Akutagawa be a total badass with his ability Rashōmon. In fact, the Port Mafia member steals every scene he’s in. He is more informed about the threat they face and his ability is full of the best kind of spectacle. Not to mention, his battle against his powers in physical form was the most entertaining even though it was the least revealing character wise.

Despite its shortcomings, the movie is fun to watch. Fans of the series will love to see their favorites back in action. (Although, they may be disappointed by how little they see of the majority of the Armed Detective Agency’s members.) Atsushi’s arc doesn’t pack the full emotional punch the creators expected. But it is satisfying and provides a big reveal for the character that fans won’t want to miss. Also, the film’s central theme of accepting the darker side of yourself isn’t anything new, but it will hit home for viewers.

So, if you’re looking for something with seamless animation, a moving soundtrack, jaw-dropping battles, and a great message then Bungo Stray Dogs: Dead Apple is for you. However, if this is your first foray into the world of Bungo, you might find yourself on the outside looking in. But at least you’ll be entertained.

Bungo Stray Dogs: Dead Apple premiered in Japan on March 3, 2018, and earlier this month in the US at Anime Boston and Sakura Con. It will return to theaters in the US and Canada on May 2, 3, and 6 for Crunchyroll Movie Night.