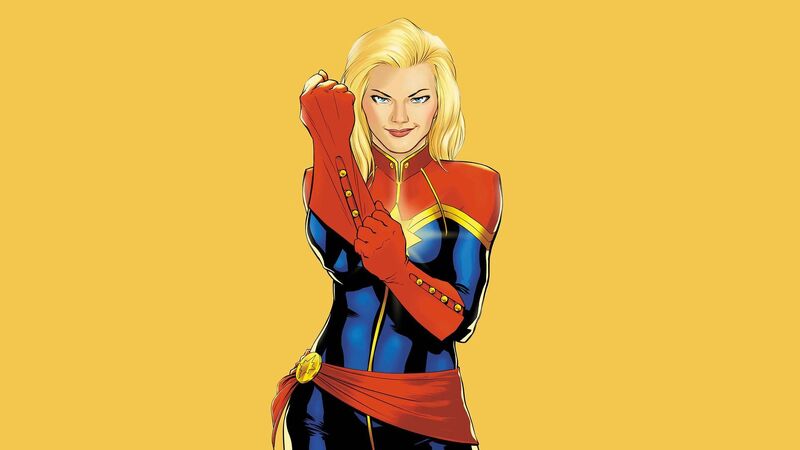 The first photos of Brie Larson as Carol Danvers AKA Captain Marvel emerged today. The photos — posted by Page 6 — showed the actress in a green suit. It’s color and design have caused some alarm among Captain Marvel fans, specifically since her character’s costume is supposed to be red, blue, and gold.

Some keen-eyed fans on Twitter, however, noticed some similarities in Carol’s green suit to that of the alien Kree warriors, and her former comic book mentor, the Kree named Mar-Vell. Could that be why she’s wearing green? Let’s dive into some comic book history and see if that’s why she’s not wearing her classic colors, at least yet.

As you can see above, Larson’s superhero suit is very green. It resembles body armor, with no recognizable insignia outside the star on her chest plate. So why is her suit green? Brett White (Decider, CBR) pointed out the similarities of Carol’s suit to that of the Kree warriors, particularly a Marvel character named Genis-Vell.

Anyway, there's a REAL Genis-Vell/Kree vibe to this look which is interesting. pic.twitter.com/Io310Z2GwG

As his Wikia page points out, Genis-Vell is wearing a Kree Navy uniform in this image. This adds weight to the theory that Carol is not wearing her Captain Marvel uniform, but a Kree uniform. Mar-Vell also wore green in the comics, when he was wearing Kree armor.

So, why is this important? In the comics, Carol Danvers is human. She ends up with Kree powers after her DNA is fused with that of Mar-Vell’s. If Carol is wearing a Kree uniform now, perhaps the film will give her a backstory that makes her Kree or even Inhuman, like we’ve seen on Agents of S.H.I.E.L.D.?

According to the film’s screenwriter, Nicole Perlman, Carol will be getting an entirely new backstory for Captain Marvel. Perlman shared her thoughts about Carol’s backstory on the Anytime with Vin Forte Podcast, back in 2016. Perlman specifically said, “There’s a lot of reinvention that needs to happen.”

If the film is changing Carol’s backstory and she’s not human, perhaps she will be a “pink skinned” Kree like Mar-Vell. In the comics, even though Mar-Vell was Kree, he wasn’t blue-skinned, he was called a “pink skin,” because his skin was light enough to look like a Caucasian human. When Mar-Vell arrived on Earth, he posed as scientist Dr. Walter Lawson. This is when he met Carol Danvers. Perhaps Carol will be given Mar-Vell’s backstory, and she’ll arrive on Earth as a Kree warrior, just like the set photos are suggesting?

If you’re a fan of Carol’s classic colors and are worried about these changes, have no fear. Concept artist Andy Park confirmed that Carol will be wearing her classic uniform in the film. His art debuted at Comic-Con at Marvel’s famous Hall H panel. In the image, which you can see above, Carol is wearing her iconic blue, red and gold suit — complete with star insignia and red sash. The final suit may not look exactly like this, but she will suit up as Captain Marvel in the film and she will be joining the Avengers in the yet untitled, Avengers 4.