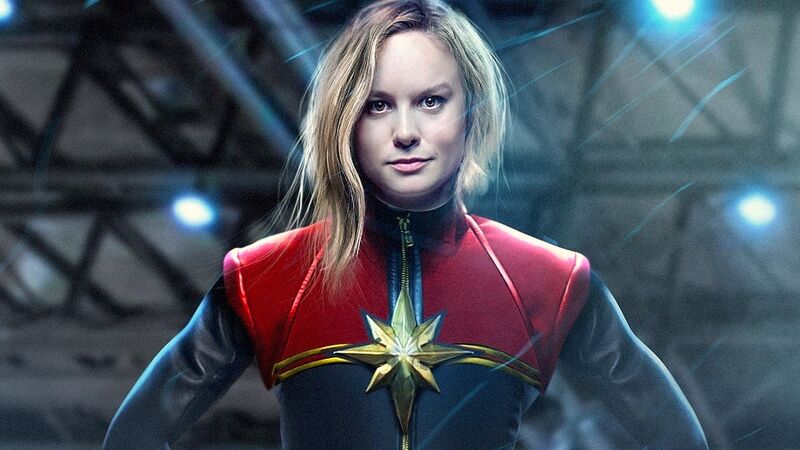 Captain Marvel: What Are Her Powers and Why Do the Avengers Need Her?

Avengers: Infinity War ends with some of our favorite heroes blowing away like dust in the wind. We know — it hurts. We also know that hope is on the way — this hope came during the post-credit scene, when Nick Fury sent a text message to an unknown person.

That unknown person is Carol Danvers, AKA Captain Marvel. Her star insignia showed up on Fury’s pager in the final shot of the film.

I got SUCH CHILLS and glimpse of hope in this particular scene in Infinity War. pic.twitter.com/R05heSX5G3

So who exactly is Captain Marvel and how can she help our remaining heroes recover their lost friends and the rest of the vanished universe?

Captain Marvel has a fascinating comic book history. Carol Danvers first appeared in Marvel Super-Heroes #13 in 1968. After years of service in the US Airforce, Carol was appointed head of security for NASA. As head of security, she was aware of certain extra-terrestrial threats, like that of the Kree. While at NASA, she met a Kree warrior who was posing as a human. The Kree was Mar-Vell and his human identity was Dr. Walter Lawson. Carol and Lawson fell in love during their time together at NASA.

Eventually, Ronan the Accuser (AKA Lee Pace’s character from Guardians of the Galaxy) ordered Kree Captain Yon-Rogg to kill Mar-Vell. During the attempt on Mar-Vell’s life, some of his Kree DNA imprinted onto Carol and she became enhanced with powers. She eventually embraced these powers and took the name Ms. Marvel.

She joined the Avengers team in Avengers Vol. 1 #183 in 1979. She spent many years fighting alongside the Avengers, as well as the X-Men. During Civil War and the Secret Invasion, Carol sided with Iron Man and the Superhero Registration Act (what the MCU calls the Sokovia Accords.) At one point, Nick Fury thought she was a Skrull (an alien shape-shifter), but she proved herself to be human.

Carol didn’t change her name from Ms. Marvel to Captain Marvel until the death of Mar-Vell in Secret Avengers #26 – #28. Upon his death, Carol decided to pick up his mantle and become the new Captain Marvel. You can read her first issue as Captain Marvel in Captain Marvel Vol. 7 #1.

She has fought alongside the Avengers since then, including during the most recent Battleworld storyline and Civil War II. She was most recently appointed the Space Station Commander of Alpha Flight, an outer space defense system.

In an interview with Vulture, Marvel Studios president Kevin Feige said that when Carol is introduced to the MCU, “she is as powerful a character as we’ve ever put in a movie. Her powers are off the charts, and when she’s introduced, she will be by far the strongest character we’ve ever had.”

In the comics, Captain Marvel is very powerful. She has superhuman strength, stamina, durability, and agility. Captain Marvel can also fly at great speeds, well beyond the sound barrier. Captain Marvel also has something called a “Seventh Sense” where she can sense danger. This has also been known to give her pre-cognitive hallucinations of incoming threats.

Like Captain America, she has regenerative healing powers. She also has immunity to toxins and poisons. She can also shoot photonic light beams from her hands, which you’ve got to admit, is pretty awesome and will likely come in handy in Avengers: Endgame.

Captain Marvel hits theaters on March 8, 2019. It takes place in the 1990s and is an origin story for the title character.

Feige said of the 1990s setting that they “wanted to explore a period before Samuel L. Jackson’s Nick Fury had any idea about any of the other heroes and crazy stuff going on in the world.” Speaking to EW, Feige confirmed that the film will “announce that Carol Danvers was that first hero that Nick came across, so … she could be the singular hero,” in the film.

Feige also said that there would be a good mix of ’90s action movie nostalgia and cosmic space visuals: “There are definitely homages to our favorite ‘90s action films within Captain Marvel … The action elements [of]  Terminator 2. That’s about as iconic as you get, looking at kind of those cool street level fights, street-level car chases, and fun stuff like that. That being said, much of the movie takes place in outer space, as you might think a Captain Marvel movie would.”

The Captain Marvel movie will also feature both alien races of the Kree and the Skrulls, meaning we could see some interesting MCU developments that align with the Secret Invasion comic, as referenced above.

So, how will a hero saving the world in the 1990s come into play during a time set in 2019? Judging from Nick Fury’s pager, it’s very possible that he paged her in the 90s and that she has the ability to time travel. We won’t know exactly how Carol and Fury’s relationship will play out until we see Captain Marvel, but it’s easy to assume she tells Fury, if you need me, page me.

If Carol can time travel, that could help some of the remaining Avengers go back in time and re-set the stage for Thanos’ invasion. Doctor Strange clearly saw a winning outcome in his “end game” when he gave Thanos the Time Stone. Did he see the disappearance of half the universe as the one thing that would inspire Fury to page Carol? Thus getting her involved in the fight?

It’s hard to say how it’s all going to play out, but Carol clearly has a key role to play in Avengers: Endgame, especially if Feige is calling her “the strongest character we’ve ever had.” Could she be the one to wrangle the Infinity Gauntlet from Thanos and snap her fingers so everything is put right again?