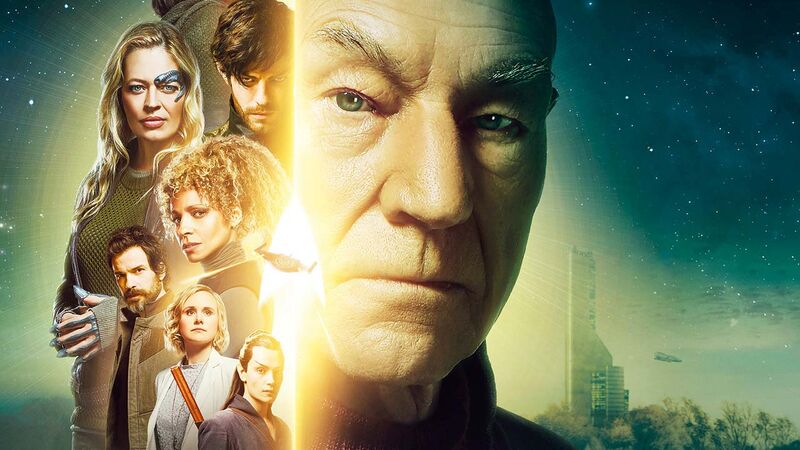 The title of Star Trek: Picard sounds like it would be a one-man show, but anyone familiar with Star Trek knows that Jean-Luc Picard would never head out to space on his own.

On Star Trek: The Next Generation, the crew of the USS Enterprise was the best of Starfleet’s already elite corps. Who else would be trusted to take their biggest, top-of-the-line starship into the farthest reaches of space to discover the curious, the dangerous, and the just plain weird? It took three episodes of Picard for the venerable retired admiral to assemble a more rag-tag crew than the now-retired admiral had served with on the Enterprise, but each of his new companions is also highly capable in their own way.

At the same time, it’s clear that some members of both of Picard’s crews are a bit more reliable than others. Just think of how often Data would suddenly commandeer the Enterprise, run off with his android brother Lore, or unintentionally put everyone in danger on the supposedly-safe holodeck. Even Wesley Crusher, a surrogate son of sorts to Picard, suddenly developed god-like powers and set off on his own mysterious adventures. So with that in mind, here are the best team players who have ever worked with Picard.

As the captain’s second-in-command, the primary job of a Starfleet first officer is to make sure the captain’s orders are carried out. But as we see several times from Picard’s first officer on the USS Enterprise, William Riker (Jonathan Frakes), it’s also the first officer’s job to double-check the captain to make sure he’s thinking about all the unintended consequences of his decisions. Sometimes that even means standing up to the captain when he’s making a bad decision. In fact, the first officer is the only person on the crew who can get away with questioning the captain’s orders (which is generally best to do in private). Riker was always independent-minded, yet he was so loyal to Picard over the years that he repeatedly turned down offers to command other ships so he could stay on the Enterprise. And there were numerous occasions, such as when Picard was captured and assimilated into Locutus by the Borg, when Riker pursued a dangerous course of action on a razor-thin chance he could help Picard out of trouble. It was truly the least Picard could do to serve as Riker’s best man when he married Deanna Troi in Star Trek: Nemesis.

Dr. Beverly Crusher (Gates McFadden) knew Picard long before she was assigned as the Enterprise’s chief medical officer. Her husband, Jack Crusher, served with Picard on the USS Stargazer, and the three of them were social friends. When Jack died on an away mission, Picard had the sad duty of informing Beverly and her son Wesley about the tragedy. Once the Crushers were on the Enterprise, they became almost like family, with Picard serving as a reluctant father figure to Wesley while also allowing him to serve as an acting ensign on the bridge. After seven years together on the Enterprise, Picard and Dr. Crusher are captured and forced to share a psychic link, which leads them to reveal that they have romantic feelings for each other. They ultimately decide to remain close friends and keep their working relationship professional.

As the first Klingon officer in Starfleet, Worf (Michael Dorn) often felt torn between his heritage and his loyalty to Federation family and friends. It’s telling that, despite the internal conflict he suffered, Worf always ultimately returned to Starfleet and upheld Federation values of mercy and compassion (except for that time he finished off Duras with his bat’leth). Worf chose Picard to stand by his side in an honored role when he first tried to clear his family name before the Klingon High Council. Picard respected Worf, and Klingons in general, for his devotion to duty and honor. With his warrior ethos, Worf was always the first to jump into the fray, squaring off against incredibly strong beings the Enterprise encountered. But more importantly, Worf could outthink opponents tactically, which is why Picard relied on him for the most dangerous missions.

The chief engineer is the get-stuff-done person on a starship, and Geordi La Forge (LeVar Burton) never failed to live up to that role. Picard first met La Forge when he was just a shuttle pilot. When Picard made an offhand comment about the shuttle’s subpar engine efficiency, La Forge spent the entire night reconfiguring the system, impressing Picard enough that he first made him helmsman and later engineer on the Enterprise. Whenever Picard needed the warp engines to exceed their specifications, damaged systems to be fixed right away, or the navigational deflector to emit some kind of novel particle that Data theorized would solve whatever problem the Enterprise was having that week, La Forge would make it happen without question or complaint. When TOS chief engineer Montgomery Scott admits to La Forge that he would always over-estimate how long it would take to fix Kirk’s Enterprise so he could burnish his reputation as a “miracle worker,” La Forge is stunned — he would never dream of any level of dishonesty with Picard.

Raffi Musiker (Michelle Hurd) was Picard’s first officer on board the USS Verity, his last command in Starfleet. Musiker was shocked when Picard resigned in protest after Starfleet refused his plan to use mothballed starships to rescue Romulans from their doomed homeworlds. She was dismissed from Starfleet soon afterward and didn’t speak to Picard for years, living alone in a tiny house in Vasquez Rocks, California. When Picard arrives to ask for Musiker’s help, she pulls a gun on him. That might disqualify Musiker as a team player, except Musiker’s main complaint is that Picard didn’t reach out to her in the intervening years. Despite her initial refusal to join his mission, she shows up aboard the La Sirena just before they leave Earth. Musiker claims she’s not really joining Picard’s team and just “hitching a ride,” but she already found the man Picard is looking for, which is quite a bit of effort to help a man she supposedly hates.

Laris (Orla Brady), the Romulan housekeeper working at Château Picard, doesn’t go into space (so far) with the rest of Picard’s crew. Which is surprising, because she’s far and away the most knowledgeable, capable, and loyal companion in Picard’s life. Laris (along with Picard’s other household staffer, Zhaban) is a former agent of the Tal Shiar, which is the Romulan secret police organization. She helps Picard investigate Dajh Asha’s apartment using sophisticated Tal Shiar technology that can create a hologram reenacting events that occurred days before, and instantly understands how the Tal Shiar have apparently “scrubbed” the scene to defeat that same device. Laris also tells Picard all about the Zhat Vash, an even-more-secret-than-the-Tal-Shiar organization that might be behind Dajh Asha’s death. When Romulan agents attack Picard in his house, Laris handily disarms them and capably interrogates a survivor. Yet despite all those useful skills, she’s happy to simply serve Picard his decaf Earl Grey.