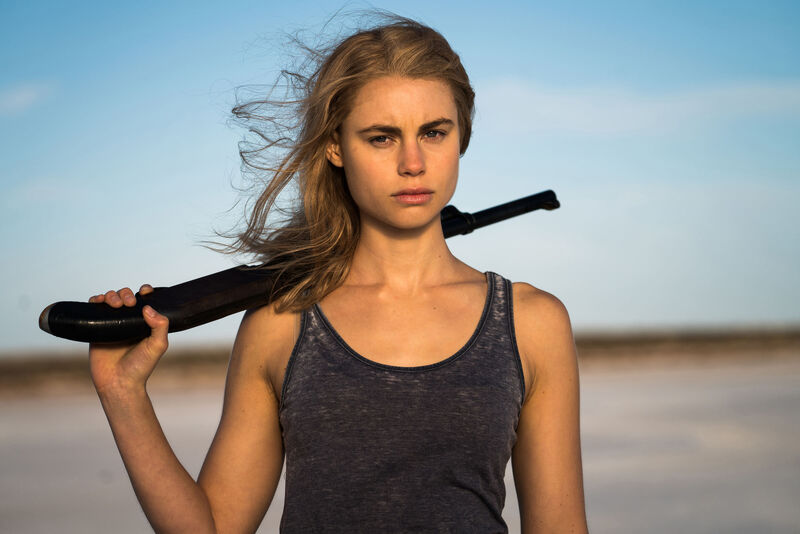 Prepare to return to the Australian outback in terrifying tale of survival when Wolf Creek – the six-part television event — comes to Pop. You’ll no doubt remember the 2005 film of the same name, which was followed by an equally unnerving sequel. This time, the tables are turned and the hunter becomes the prey.

In Pop’s Wolf Creek, we follow American tourist Eve Thorogood (Lucy Fry), who is the sole survivor when her family is brutally killed at the hands of deranged serial killer Mick Taylor. Eve vows to bring him to justice. Fry is best known for her work in Hulu’s 11.22.63 and Vampire Academy, a dark comedy that combined Mean Girls with fangs. This native Australian actor does an amazing job straddling the line between damaged, fragile, and strong in her quest for revenge as Eve.

Watch our interview with Lucy Fry…

And the one and only John Jarratt is back to reprise his role as Mick Taylor. While best known to American audiences for the Wolf Creek franchise, Jarratt has had an accomplished career, appearing in notable films like Django Unchained and the Baz Luhrmann epic Australia.

The cast is rounded out by Dustin Clare, who plays Sullivan Hill, a sympathetic cop who wants to help Eve. You’ll recognize Clare from Spartacus: Gods of the Arena.

Eve is a kick-ass protagonist you’ll actually care about as you watch her transform from young victim to warrior. The series is smart enough to get out of Mick’s way and let him wreak havoc in a disturbingly gleeful way — we are, after all, in his world. We even get to see a glimpse into Mick’s back story and see how the man becomes the monster.

For those unfamiliar with the story behind Wolf Creek, the series is partially based on true events. In 2001, two British tourists, Peter Falconio and Joanne Lees, were pulled over near Wolf Creek National Park by a mechanic named Bradley John Murdoch who claimed to see sparks coming out of their exhaust pipe. When Falconio went to the back of the van with Murdoch to check it out, he was never seen again.

Of course, the storytellers took some liberties with the “true events,” but that doesn’t make Wolf Creek any less chilling. The horror-thriller-cat-and-mouse tension should satisfy even the most discerning horror fans. Will Eve catch Mick before he catches on to her plan? Will the cops get there first? You’ll have to tune in to find out. Wolf Creek debuts Friday, October 14 on Pop.