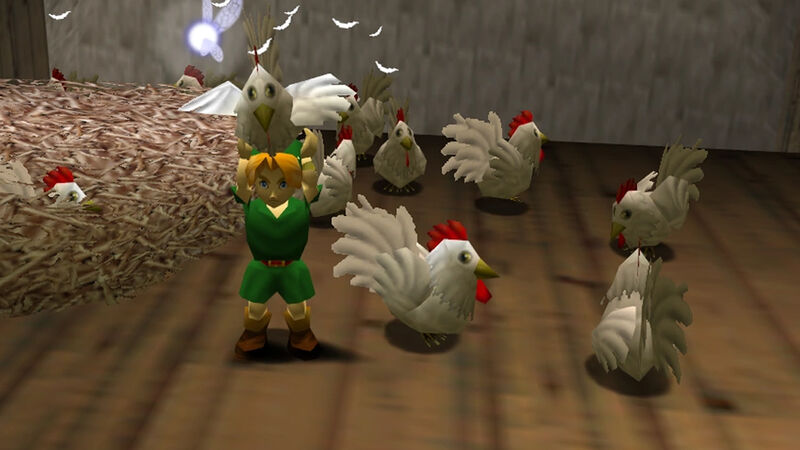 Why do you play video games? Is it because of the interesting characters? The thrilling action? The immersive storylines? That’s all well and good—but I always look for something more. For me, games lack that necessary je ne sais quoi if they don’t have one key component: chickens.

Chickens are the unsung heroes of video games. Like extras in a movie, they fill a scene, grounding you in reality, and telling you that, no matter how weird this world gets, at least it’s not so weird that chickens don’t exist.

So let’s look at which chickens are at the top of the pecking order (and which ones can go straight to chicken hell for all I care).

Let’s be real. Animal Crossing chickens are barely chickens. They don’t do anything particularly chicken-y, they don’t lay eggs, and they take up precious space on your island that you would much rather fill with cuter villagers. Thanks, but no thanks!

Torchic is technically not a chicken (as it is a Pokémon), but somehow is still more of a chicken than those Animal Crossing pretenders could ever hope to be. Torchic looks very similar to a cute little baby chicken, and, just like a real baby chicken, can shoot fireballs at its enemies. (Its official bio notes that the fireballs can be up to 1,800 °F, which seems like too much if you ask me.) Torchic can evolve into Combusken at level 16, which also has decent chicken similarities. Its feet are exactly the same as chicken feet, and the rage in its eyes is a familiar sight to any chicken connoisseur. Unfortunately, things go downhill at level 36, when Combusken evolves into Blaziken. Blaziken is six feet tall and wears fashionable wide-leg trousers. Real chickens would never wear wide-leg trousers, as it would make them look squat.

Gears of War 3’s Lambent Chicken easter egg is a punishment from God. It is a 10-foot-tall golden chicken with a powerful flame breath, bent on the destruction of those who have wronged it (i.e., you). There are multiple ways to summon this fearsome fowl, and all of them involve murdering innocent chickens. If the Lambent Chicken appears, it means you’re getting what you deserve. Good luck, or whatever.

Sekiro’s chickens are another example of chicken-as-enemy. Though they look exactly like IRL chickens, these feathered foes hit harder than the average soldier and absolutely do not need a reason to attack. We should be grateful that the chickens we encounter in the real world aren’t as powerful as they are angry—Sekiro showed us what that looks like, and it isn’t pretty. These chickens do perfectly resemble real chickens, though, so I still love them, even when I’m extremely mad at them.

Speaking of chickens that will attack you for no reason—the chickens in Assassin’s Creed: Odyssey will attack you for no reason. Fortunately, these chickens are a little closer to real-life chickens, in that you’re not likely to be pecked to death by one of them. Unfortunately, if they get their friends involved, your odds of surviving the encounter are a little slimmer. These chickens are visually perfect, and their realistically aggressive personalities match up well with their IRL counterparts. All-around decent chicken, albeit kind of annoying.

Spyro chickens make me sad. They’re fodder, designed to be sprinted through or roasted. All they do is stand around minding their own business until getting unceremoniously stampeded by the world’s worst dragon. (I’m not very good at Spyro.) They’re basically non-entities, but they make me feel bad every time I kill one. They’re notable for being one of the only chickens on this list that don’t punish you for hurting them (but just because they don’t doesn’t mean they shouldn’t).

Chickens have a special place in the hearts of Fable fans. They’re realistic (almost to an eerie degree), non-violent, and peppered liberally throughout the series. Also there’s a questline where you kick them. A lot. As a result, much like Spyro’s ill-fated fowl, these feathered friends firmly fall into the “good chicken but makes me sad” category. Side note: can video games stop making me harm animals? Yes, I know they’re just pixels on a screen. I’m still a huge baby about it. One time, I was playing Red Dead Redemption 2, and I tried to brush my horse, but I accidentally punched it instead. I never picked up the game again. (Also I was bad at it anyway.)

Outer Worlds chickens are extremely passive—they basically just mill around, leaving you to wonder how chickens got to space in the first place. They can be killed, at which point they’ll drop chicken feathers (realistic), but they’re not bothering you, so why would you bother them? The Golden Rule still applies in space, you know.

Skyrim chickens are just like regular chickens, except they’re snitches. Even though this is, of course, an intolerable quality in humans, you’ve gotta admit it’s pretty impressive when a bird does it. Even more impressive: how the people of Skyrim will rally around their chicken brethren. If you attack a chicken, Divines help you, because these people love their chickens, and will show you no mercy. Based on this, you can assume these chickens have great personalities (otherwise, people wouldn’t be so peeved if you attack them). They’re probably really fun at parties. They probably really liven up the joint.

Okay, yes, these are technically Cuccos and not chickens, but, come on. They’re chickens. They lay eggs, wake up lazy ranchers, and will not hesitate to kill you if necessary. These little cuties are classic video game chickens, and deserve to be treated with respect. (And, seriously, if you don’t treat them with respect, they will kill you. I cannot stress this enough.) Even though rounding them up for their irresponsible/allergic owner is a pain, you’re usually rewarded with a nifty prize (like Ocarina of Time’s empty bottle, which would go straight in the recycling bin IRL but comes in clutch when you’re trying to catch a fish so that a bigger fish will eat you, or whatever other weird tasks that game makes you do). They also make classic chicken noises, which is weirdly uncommon in the world of video game chickens. That alone earns them one of the top spots on this list.

Minecraft’s blocky beakèd babies are powerful in their own way. Not literally, because they have the approximate strength of the average chicken (none) and are hunted by the same predators as the average chicken (all), but attack damage isn’t the only way to measure might. Chickens in Minecraft will, incredibly, lay an egg every five to ten minutes. Can you do that? No. Of course not. (If you answered “yes,” please go see a doctor. It is urgent.) Even real chickens can’t do that. These chickens are extremely cute, although they do look a little like ducks wearing neckties. Nobody’s perfect.

JUST KIDDING. The Stardew Valley chickens are perfect. These gorgeous gals give you an egg every day, increasing in quality as your relationship with them grows stronger. In turn, this makes you richer and more popular, because the residents of Pelican Town are super materialistic and don’t understand how hard it is running a farm and fighting monsters and single-handedly putting the Community Center back together. Ahem. The Stardew Valley chicken is the platonic ideal of a chicken. They hang out in their coop when it’s raining, mill around outside when it’s sunny, and eat a pile of hay every morning. We have so much in common! They are cute, pleasant little friends who just do cute, pleasant little chicken things all day, every day. All chickens should aspire to be like Stardew Valley chickens—both in-game and IRL. These are, hands down, some top-notch chickens.

Incredibly, this list doesn’t even come close to including all video game chickens. Seriously, there are so many… and there should be more. A chicken in every game. If you’re making a game, and it doesn’t have a chicken in it: reconsider. After all, what are you—chicken?