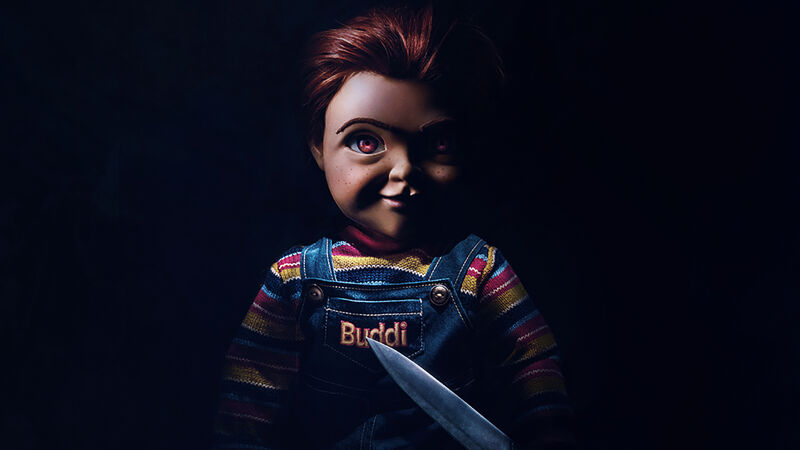 Opening this weekend, Child’s Play reimagines the concept of the 1988 franchise-spawning horror film in some very notable ways.

Lars Klevberg (Polaroid) directed the new Child’s Play, a fact that amusingly came as a bit of a surprise to Klevberg himself, who told Fandom that when he was sent the script, he initially assumed it wasn’t something he’d be interested in. As Klevberg explained, “I’m a big fan of the original one but never pictured myself doing a Chucky movie in my career so I was like ‘That’s nice that they sent it to me but I don’t think I’ll do it. No disrespect but that’s not the type of movie I like to make.’”

However, Klevberg said that once he read it, “I was blown away by how they shaped the script, the story, the characters, Chucky’s arc and the brilliance of it. I put the script down and I was like ‘Oh, this is interesting.’”

Klevberg went on to tell us what leapt out at him and how he approached this new incarnation of Chucky.

In the original film, a normal doll is possessed by the soul of sadistic serial killer Charles Lee Ray, but the new Child’s Play completely reinvents Chucky’s motivations. This time, he is part of a notably high-tech line of dolls created by an all-encompassing, Amazon-esque company, Kaslan, and is capable of learning and evolving – even as his safety protocols have been turned off thanks to tampering with the chip that controls him.

Klevberg said this new approach quickly grabbed him, recalling, “I got a couple pages into the script and saw that they did something to the [doll’s] chip early on. And I said ‘Oh, this is where they’re going, interesting.’ Then when I kept reading, it allowed me to witness Chucky in a way that I really connected to. I’m looking for characters that not only can you connect to emotionally but that have an arc and a plausible way with their actions. Turning Chucky into this self-aware doll, who is starting to learn by looking at his surroundings, for me that was refreshing and allowed me to create a Chucky that was different in a way and that you understood his motivations and his actions. You didn’t agree with all of them but you understood where he was coming from and what he wanted. That for me was pivotal in accepting this job.”

Chucky is built to interact with and help control all sorts of devices in modern smart homes and also link up with other electronic products from Kaslan. This ends up helping him (and hurting others) in a big way, as he can control drones and other devices he can put to decidedly nasty uses.

Regarding Chucky’s ability to interact with and control technology, Klevberg remarked, “Not only does it elevate Chucky as a character but it naturally gives Chucky the ability to use those tools. It’s not like he just gets superpowers or can do stuff and it doesn’t make sense. It’s integrated into the story about a doll connecting to devices. And as the doll changed, his way of using those tools changed too.”

Chucky’s new origins also drastically change his dynamic with Andy, the boy who owns the doll. In the original film, Chucky is manipulating and using Andy from the start, with his only real use for the boy stemming from wanting to transfer his soul into him to become human again.

In the new film, an older version of Andy (played by Gabriel Bateman) truly forms a bond with Chucky initially, with the doll wanting to do whatever he can to help someone he sees as his friend. The only problem, of course, is that Chucky doesn’t understand that there are certain lines you don’t cross when it comes to dealing with obstacles in Andy’s way.

Said Klevberg, of this dynamic, “That’s fun because Andy gets Chucky in a situation where it feels right [for him to have the doll]. He’s isolated and doesn’t have the best relationship with his mom. If Andy was younger, kids at that age would turn to their parents, but if you bump up that [character’s] age, they don’t want to talk to their mom for specific reasons. That allowed us to get Chucky into his life in a different way. By doing that, you have this ability to create this relationship between them. For me, it was equally important to witness Chucky becoming this evil doll as the story progressed. Because for me, then it’s interesting. It’s two strong forces going against each other and you can understand both of them. For me, that’s the Greek tragedy. It’s huge emotions like betrayal, love, and hate. At the end, when this ultimate showdown happens, you can understand both of them.”

Of course, a key component to Chucky is his voice, with the doll so memorably portrayed by Brad Dourif in the original film and its sequels. The new Child’s Play would ultimately garner a lot of attention when it was announced that none other than Mark Hamill would be voicing Chucky.

When it came to this casting coup, Klevberg said, “It was great because I didn’t think about the voice until I was done shooting the movie and started doing post because I was so busy. But I knew that was one of the most crucial things we could get in terms of casting. We announced we were going to do the movie and the whole internet was like ‘Okay, who is going to be the voice?’ They were more aware of that than I was. Trying to make the best movie as possible and being as professional as possible, for me it comes down to what I want to tell with the script and the character. I needed someone who was able to portray Chucky as a complex and dynamic character and I knew that Mark is a terrific actor and can do that and I knew that Mark was very experienced with his take on Joker in Batman: The Animated Series. So we sent him the script and a letter and he loved it. We set a call for him and a week later he was like ‘I want to do this. I’m so excited.’”

Klevberg noted Hamill came prepared. “He watched all the Child’s Play movies back to back. We met with him and he started working and it was super fun. He’s really professional, shows up, does his work, has ideas. He’s a pleasure to work with. It was challenging to shape the voice – like how much we want to have him be in the deeper voice and how we want him to change and in what circumstances. Mark was very helpful with that and we did a lot of takes and ended up in a pretty good spot. We don’t have a doll that changes overnight. This is something that was consistent throughout but at the same time we needed to have him becoming more humanoid at the end, gradually. We wanted to find a perfect way where you don’t sense that it’s different.”

Bring on the Blood

“In horror movies, everyone wants to see great kills. If you’re going to add gore into it, it has to be perfect for the scene,” Klevberg remarked to Fandom.

Child’s Play certainly doesn’t hold back in this regard, with the second half in particular going big with some very notable and memorable deaths, some of which get very gory.

As Klevberg explained, “The studio said early on that this was going to be a rated R movie. I’m not a big fan of slasher [and gore] movies — except Brain Dead from Peter Jackson. I don’t feel any need to show it just for fun or to get attention. But for this, we talked about it a lot and we’re dealing with the Child’s Play movie legacy and Chucky and in the history of cinematic characters, I think of Alien and Jaws and The Blob… It’s integrated into the story that violence and gore is a part of it and we wanted to keep that in this one.”

Finding the right amount of gore was tricky, with Klevberg noting, “We went back and forth a little about how far we wanted to push it. We screened it to people to see their reactions and if it’s the reaction we want. We don’t want people to turn sick or turn away. It’s more like there’s an entertainment in it. We just wanted to make a movie with reasonable and interesting characters and preserve the drama in it and then have it turn violent in a beat. I think that’s funny, actually.”