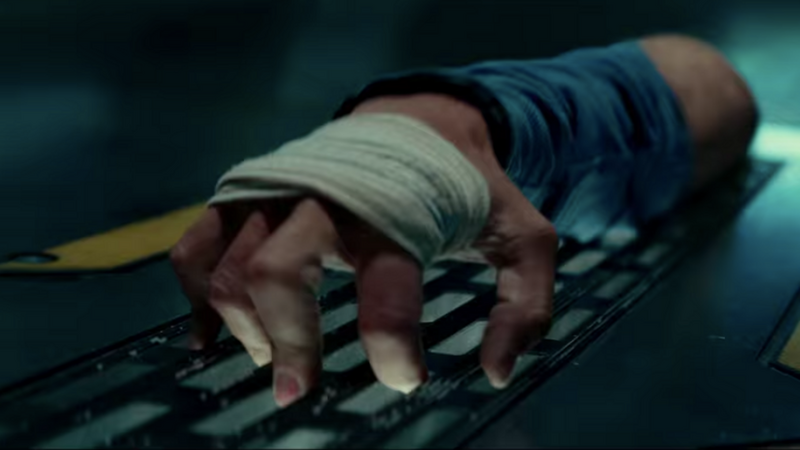 ‘The Cloverfield Paradox’ Review: A Misfire in Almost Every Way

SPOILERS for The Cloverfield Paradox.

The Cloverfield Paradox is going to be a touchstone movie for a number of reasons. Most people will focus on its release strategy — one advertisement played during the Super Bowl and then the movie was available on Netflix right after the game — while others will hone in on its involvement in the Cloverfield series.

But, the real reason to discuss The Cloverfield Paradox is to try and examine how this movie went so very, very wrong.

The biggest issue with The Cloverfield Paradox is that it doesn’t quite know how to sell itself. The script by Oren Uziel clearly wants to be scary — a research crew on an orbiting space station set off an energy collision and that causes some weird stuff to start happening — but the approach the film takes is either knowingly or ignorantly ridiculous.

Moments that are intended to be shocking or unsettling are instead some of the funniest bits of the movie. This undercuts all of the drama at every turn as we can’t even begin to care about the characters or their predicament. And though this does elicit chuckles, it’s not enough to take the movie into any truly enjoyable gonzo territory.

This issue is exacerbated by a subplot involving a character on Earth that the movie continually flashes back to. These diversions are unmotivated and feel out of step with the kooky sci-fi shenanigans going on in space. It doesn’t help that the Earth segments look completely different on a technical level. That probably has to do with reshoots and a desire to make this more of a clearcut Cloverfield movie.

10 Cloverfield Lane is a great little flick. It took the Cloverfield name and used it to sell audiences on a small-scale, character-driven horror story with a sci-fi twist. Though it has the most tangential of connections to Cloverfield, it works on its own merits. The Cloverfield Paradox is a film that is reliant on the original Cloverfield for all of its propulsive nature. Early on, we realize that the experiment the space station carried out — oh yeah, the space station is called Cloverfield because *blech* — is what causes monsters/aliens/whatever to show up on Earth.

Exactly how this lines up with the original movie doesn’t ever explicitly make sense. The Cloverfield Paradox appears to take place in a not-too-distant future but Cloverfield was set in 2008. We see characters using modern-day smartphones and other technology that is obviously far beyond what 2008 had to offer. Normally, this wouldn’t be a huge issue. There are hints that all manner of things have occurred during the energy collision — including perhaps some kind of time twist. But, because the movie is making a blunt sell about being a Cloverfield prequel, this unsatisfactorily explained matter sticks out like a sore thumb.

It’s also disappointing to see The Cloverfield Paradox take the potential that 10 Cloverfield Lane set for the franchise — a series of thematically similar but canonically unconnected sci-fi/horror films from up-and-coming writers and directors — and devolve it into the kind of expected continuity we get from run-of-the-mill blockbusters.

But, even if we ignore the connections to Cloverfield, this film still stumbles over its own feet in the most crucial department: characters. Our crew aboard the Cloverfield Station (ugh) isn’t given the proper time to cement themselves as well-rounded characters. We do spend substantial time with Ava (Gugu Mbatha-Raw) and she is given the only real bits of character building in the film. It’s threadbare but at least it’s something compared to everyone else.

Probably the worst culprit in the character department is Michael (Roger Davies), Ava’s husband who is on Earth when everything goes south. His subplot about finding a girl whose house was just destroyed by a monster goes absolutely nowhere. It could be excised from the film completely and there would be no effect whatsoever.

That’s a shame because this is a great cast. Wonderful actors like Daniel Brühl, David Oyelowo, and Chris O’Dowd get saddled with meaningless and often dim-witted technobabble. And not a single death in the film carries any weight or impact other than the occasional giggle.

If there’s one positive takeaway from The Cloverfield Paradox, it’s that director Julius Onah will definitely be working again if he shows off shots from this flick on his demo reel. The Cloverfield Paradox is a good-looking movie. That credit should also be shared by cinematographer Dan Mindel, who was behind the camera for Star Wars: The Force Awakens. There is a shot of Ava sitting in front of a video screen that is truly gorgeous. They knew that shot was a winner because they implemented it into the film’s logo.

Along with looking good, the music by Bear McCreary — who has provided music for all of the Cloverfield films — is genuinely great. There is an appropriately majestic beauty to a lot of the score that makes the film feel a lot bigger than it really is.

Is The Cloverfield Paradox Good?

No. It’s a major disappointment. Between the clunky connections to Cloverfield, obvious retooling in post-production, unintentionally goofy tone, bad dialogue, and wasting of a talented cast, this is a failure that hurts. After 10 Cloverfield Lane, this seemed like a series that could be a new standard for sci-fi/horror fans. Instead, it’s everything bad about genre and blockbuster filmmaking rolled up into one misshapen ball.