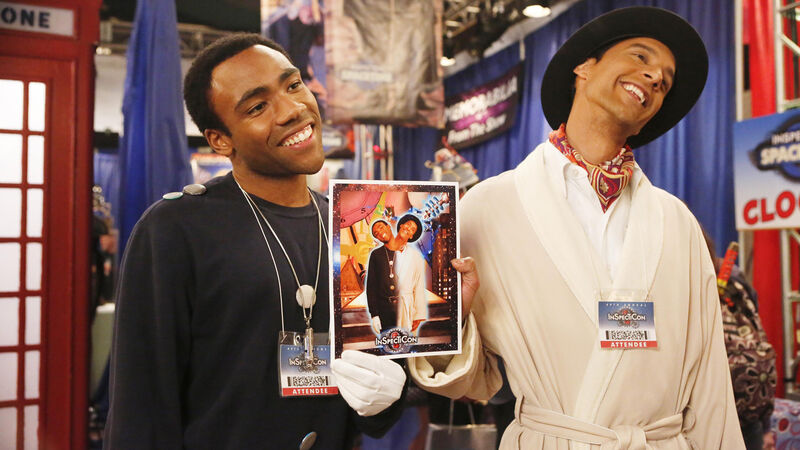 The Strange Legacy of ‘Inspector Spacetime,’ ‘Community’s ‘Doctor Who’ Tribute

Now that Community is streaming on Netflix in the US, while still remaining on Hulu — a rarity in the era of exclusive streaming deals — a whole new legion of viewers is discovering the show and one of the things that those who watched when the series first premiered in 2009 remember fondly. Specifically, the show’s deep love of inside jokes, as the Dan Harmon-created ensemble sitcom about an eccentric group of community college students ended up cultivating one of television’s densest mythologies (especially for a comedy).

One of the show’s most delightful running gags revolved around the existence of Inspector Spacetime, which started off as an amusing reference to the long-running British sci-fi series Doctor Who. But the depths of oddness eventually went beyond a simple parody of a TV show, extending into the real world.

In the world of Community, Abed (Danny Pudi) is first introduced to Inspector Spacetime by Britta (Gillian Jacobs), who is feeling guilty about getting him addicted to the short-lived British edition of his favorite sitcom, Cougar Town. As opposed to Cougarton Abbey, which only lasted six episodes (and ended with all of the characters dying by suicide), Britta promises that the long-running Inspector Spacetime originally premiered in 1962 and kept going and going, and thus, there are decades worth of episodes for Abed to enjoy.

Abed falls instantly in love with the show after watching one clip of the series, which introduces The Inspector (played by an actor named Travis Richey, which will be important shortly) and his faithful companion, Constable Reggie (Derwin Jordan). The parallels to Doctor Who are not exactly subtle, from the riff on the Doctor’s iconic nemesis the menacing Daleks (though the “Blorgons” chant “eradicate!” instead of “exterminate!” when attacking) to the Inspector’s choice of transportation (a red telephone box, as opposed to the Doctor’s blue police box ).

The episode in question, “Biology 101,” originally aired September 22, 2011, during Community Season 3, and Richey would make two more appearances on the show as the Inspector. But within days of the character’s debut, Inspector Spacetime would take on a life of its own thanks to the Internet.

A Life Of Its Own

As reported by Tor.com in 2011, Community fans with a deep knowledge of Doctor Who began collaborating together almost immediately to create a complete history for Spacetime, primarily on a TV Tropes page dedicated to the “franchise,” in many ways hewing closely to Who’s real-life history. This included coming up with the casting for other incarnations of the Inspector, including Christopher Lee, Graham Chapman, Stephen Fry, and Steve Carell (in the ill-fated 2001 attempt to adapt the series for an American audience) and other riffs on the mythology and production history of the show.

To be clear, none of those actors actually ever played the Inspector on Community — this was all a fan fiction labor of love. But the line between canon and fanon became a bit blurry when Richey, inspired by the fan efforts to build a world around a character he played for only a few minutes of screen time in the third season of Community, decided to launch a Kickstarter campaign to fund an Inspector Spacetime web series, featuring himself as the 11th Inspector.

Richey launched his Kickstarter campaign in February 2012, using the title Inspector Spacetime, but despite making it clear in the original post that his project would be an independent project with no involvement from NBC and Sony Pictures Television, who produced Community, Richey’s project was quickly hit with a cease-and-desist message from the companies.

However, Richey was undeterred and simply renamed the project Untitled Webseries About A Space Traveler Who Can Also Travel Through Time, raising over $25,000 to produce the first season, now available on YouTube. A second season cannot currently be found online, but a feature film version is currently in the works. (Whether it manages to release a film before Community‘s own fabled movie is a tough question, though perhaps Community‘s recent move to Netflix would give it an edge.)

Richey’s solution to the cease and desist order was basically what Harmon suggested fans do if they wanted to make their own Inspector Spacetime content, as quoted by io9 in 2012:

There might be ways to creatively get around it. Without calling it certain things. Play their game, call it something else, because that’s what we do when we rip stuff off. Call it Inblector Blacetime, and do it. That’s the advice I can give you.

While Richey never returned to the show after Season 3 — his last appearance was in a clip from the “infamous” Inspector Spacetime Christmas Special featured in the episode “Regional Holiday Music” — Community did revisit Inspector Spacetime without his involvement in “Virtual Systems Analysis,” using the show as part of an elaborate fantasy sequence being lived out inside Abed’s Dreamatorium, with Abed and Annie (Alison Brie) playing the roles of the Inspector and a newly-established companion for the Inspector, Constable Geneva.

Many of the details established by this episode go against the previously created fan continuity, but Season 4 already occupies a complicated place in Community history, since it was the season infamously made without the involvement of Harmon. So perhaps it’s fitting that there is a messiness to what temporary showrunners David Guarascio and Moses Port brought in before Harmon returned the next year, given Community is a show that has the legacy of embracing what its fans bring to it, and make of it.

Community is streaming now on both Netflix and Hulu.

Check out more at Fandom’s Community wiki and the Fandom Inspector Spacetime wiki.