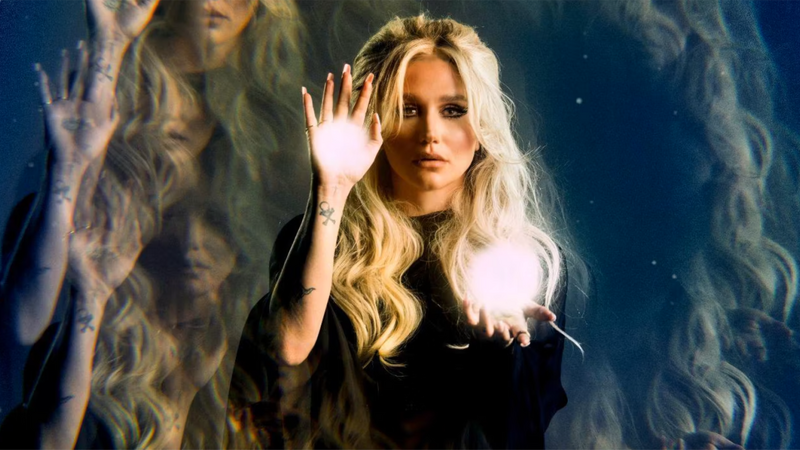 Kesha (no dollar sign) has always had a fascination with the supernatural. Fortunately for her fans, she’s teamed up with Discovery+ to share that fascination in her new paranormal reality show, Conjuring Kesha.

Walking into the press room for the series at San Diego Comic-Con, I knew Kesha and her friends, Big Freedia and GaTa, were prepared to face whatever challenges awaited them, be it lost spirit looking for salvation or intrepid pop culture reporter looking for answers.

Kesha had her hair pulled taut in a tall braid, eyes exaggerated with fierce black swoops of eyeliner. She wore a shiny leather top seemingly designed to emulate armor—to protect from evil entities? Or perhaps to warn them that Kesha isn’t to be trifled with?

To her right was bounce music legend Big Freedia, who, in the season finale, accompanies Kesha to West Virginia’s deeply haunted Trans-Allegheny Lunatic Asylum. She was wearing a bright sweater, big eyelashes, and even bigger jewelry. Perhaps these choices were also meant to ward off evil. Perhaps she just intended to look fab. Either way: mission accomplished.

To Kesha’s left was rapper/actor GaTa, who journeyed with Kesha to San Francisco’s Westerfeld House. (Also deeply haunted.) He cleverly masked his fear of the unknown with a chic pair of indoor sunglasses. If any ghosts were intimidating him, they would be none the wiser.

All three were ready for anything. But were they ready for my questions? (Yeah, probably.)

Fandom: What first got you interested in the supernatural?

Kesha: Since I was little, my whole family, my mom, my brother—it’s been a very natural conversation piece in our home. Like it was always natural to play music and we would talk about ghosts and angels and our spirit guides. My mom studied astrology in college, so she planned me to be a Pisces because it’s the oldest of the zodiac signs. So it was just kind of always in my family. It was very natural. And I saw my first supernatural thing at about four years old, and I didn’t even know what it meant. I just know the feeling. I saw light coming in through the window. I had an understanding that it was my grandmother who passed away.

After that I just had little moments, and I was always really interested in the supernatural. I saw a cluster of lights in the desert and—I was totally sober in the desert, to be clear—and saw a formation of lights that kept moving. It wasn’t even dark yet. And I just had an understanding that those were spaceships. And it just was what it was. It wasn’t… I had a different reaction than you think you’d react. I saw it—and I didn’t scream, I didn’t cry, I just had an understanding of what it was. It felt really calm. It felt very natural. And that’s why I feel like I knew it was real.

So then during COVID I had a lot of anxiety and I was having kind of existential crisis after existential crisis, and one night I just had a really spiritual moment where I started having a full conversation with some other being—not sure if what I was speaking to was God, or if it was an angel, or maybe it was a spirit guide, or maybe it was my higher consciousness. But it was not anything that I’d ever experienced before and I thought I was losing my mind. The next day I woke up and I called my therapist and I was like, “I think it happened. I lost my mind. What do I do now?” And she told me it was a spiritual awakening, and the universe was just really opening itself to me, and to embrace it.

So, I started writing music about it—it’s influenced my music, that moment—and I really wanted to do a show about this. It started as a podcast during COVID, and then it developed into Conjuring Kesha where I get to take a friend to a different haunted location, a different active location in each episode. And I really didn’t know what to expect! All I know is I believe there’s something bigger. I had a conversation with something bigger, something outside of myself. I’m not necessarily any particular religion, but I believe in spirituality and the symbiosis of the universe, and the energy of us all being connected. I just wanted to explore it further, and we did that, and it was fucking insane.

Fandom: Okay, so you got to bring friends with you—did you have any friend who was notably the most scaredy-cat of all your friends?

Fandom: Oh, they were all brave?

Kesha: Yeah! Honestly, for me, I was kind of being a bit of a pussy, because I got Michael Salerno [the Lorraine Warren-trained demonologist from the season premiere] telling me about demons who can kill me, and I got really scared, and Whitney [Cummings]—I’ll give it to her—she really stepped up to the plate and was like, “I got you.” And so she had my back in that moment when I was really too scared, and I’ll forever appreciate that. But each episode… they’re each like their own separate journey and different emotion. Each person and I, I feel like, were brought to each location for a really specific reason by the universe. It’s like, the universe has guided us together to this certain place and we each had really amazing experiences in each place.

Fandom: Is there anything in particular you’re excited for people to see in the upcoming season?

Kesha: Yes! Each episode was active. I’m an executive producer on this show because I wanted, very specifically—the show is no bullshit. There’s nothing fake. I wanted to know that there was nothing fake, and that was the most important thing to me making this. I wanted to open my heart up to the supernatural and I didn’t want to bullshit anybody, including myself. So that was the most important part of the show for me. What am I excited about… each episode has a moment—when me and GaTa went to San Francisco, the spirit board planchette jumps to a letter—

GaTa: Yeah, that meant something to me.

GaTa: We had a dope connection. It was tight. And then it was just crazy, too, because going there… I grew up buying those magic tricks in Vegas, always studying magicians: David Copperfield, David Blaine, Houdini… So I’m just like, man, this is crazy.

Kesha: That moment was one of the highlights of the season. And then [Big Freedia and I] had another moment where we put down some baby powder… You try to explain it, but it’s just kind of something you have to see. It’s an experiment—you put down a little baby powder to see if anything makes a mark in it. The producer of the show was like, “I’ve done this like 30 times. Don’t make a big mess. It never works.” And so I put down, like, two feet by six inches of baby powder and took a picture beforehand. We set up motion-activated cameras and left for the night, around three in the morning. Then we came back the next morning. The entire hallway—300 feet of hallway, it’s covered in baby powder. Looks like it had snowed. Physically impossible. We check the cameras—no motion-activated cameras went off. There were footprints in it! Naked footprints in the middle of the baby powder. Children’s footprints!

Freedia: Yeah, it was just crazy how the prints were everywhere, but there was no path to even start the prints. That’s what was the scary part. It was wild! I was like, “What is going on here?”

Kesha: She kept trying to leave.

Freedia: I definitely kept trying to leave, honey. I needed to get out of there for sure.

Kesha: [to GaTa]: You kept trying to leave, too!

GaTa: I did leave. Kept trying? I left! I didn’t stay at the house. I was gone.

Fandom: I respect the bravery of staying, but I’m with you two. I would’ve left.

Kesha: It might be smarter. I just have, like… I’m addicted to the supernatural now. Like, now that it’s started to unveil itself to me, I’m obsessed. I don’t want to leave. I don’t want it to end. An intelligent spirit is communicating with me, that I cannot see, that I cannot explain. I can’t leave until they’re done talking to me.

Fandom: You have to know what they’re going to say next.

Fandom: Okay, we know ghosts are real and we know demons are real. Is there anything that you’re pretty sure is not real?

Kesha: I went to Mt. Shasta with Jojo Fletcher and we were looking for Bigfoot. And, walking into that—I’m gonna be honest with you—I was like, my heart is open and my mind is open. But do I believe in Bigfoot? Not really. I’m open, but I didn’t walk in a believer. And after our experience there? I definitely walked out of there thinking, “Wow, that was really egotistical of me to think I knew whether or not there was a Bigfoot.” Because after talking to people there that have seen things, after seeing the videos that they showed me… these people have all seen something. And they have experienced something. And there are a lot of people! They started talking about interdimensional beings, and when you start breaking down how many dimensions there are and quantum physics… there’s a lot out there that we probably can’t comprehend. So who am I to say what isn’t real? At this point, I’m open to it all being real.

GaTa: Yeah, me too. The Easter Bunny, the Tooth Fairy…

Fandom: Sure. It’s all out there.

Kesha: [laughing] We’ll do the Easter Bunny next season.

Fandom: Is there a paranormal experience you haven’t had yet that you really want to film for the show?

Kesha: That’s a really good question. I’m scared to put this into existence, but I really want to, next season—I want to go investigate The Rave in Milwaukee and the hotel across the street. It’s where Jeffrey Dahmer took some of his victims from The Rave. There’s an underground tunnel from The Rave to the hotel and that’s where he would murder them, and store their bodies, and eat them. So… Season 2, Jeffrey Dahmer! Putting it into the universe! I don’t want to get chopped up and eaten, but I would like to communicate with him, because I have a strange fascination with serial killers, the psychology behind them. So I’d like to investigate that next season.

Freedia: There’s none I personally want to have. Whatever happens happens, but…

Kesha: What about talking to an angel?

GaTa: I would love to be Santa Claus.

Conjuring Kesha is currently streaming on Discovery+ with new episodes dropping every Friday.