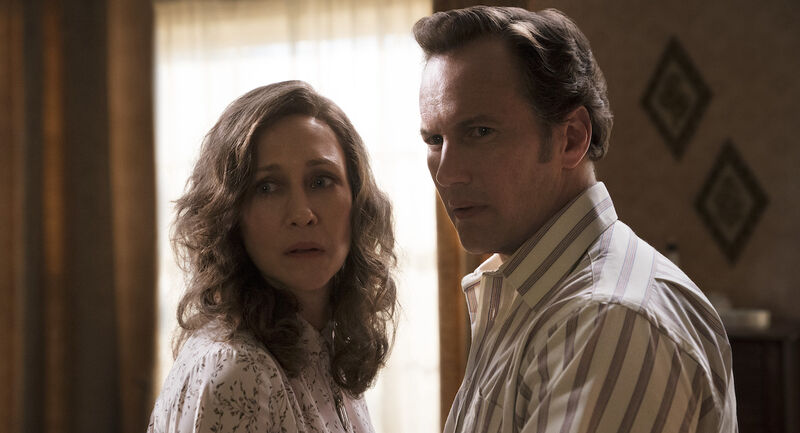 The Real Life Supernatural Stories Behind ‘The Conjuring’ Series

The Conjuring: The Devil Made Me Do It is the third film in the Conjuring series but the core movies have sparked numerous offshoots and standalone films too, all based on real events. Notably, you’ve got the demonic doll, Annabelle, and The Nun, another paranormal possession film.

The thing that makes the Conjuring films so good is the fact that they are based on real-life events, with a heavy dose of artistic license thrown in for good measure. We spoke with director Michael Chaves to find out how true-to-life these cases are.

Chaves tells us that “the promise of the Warrens is that this is what they did, they would actually have these investigations.”

“The Warrens were both famous and infamous, to the point where, in their careers, they actually would work with some police departments and on some missing person cases. So much so that either the Department of Justice or the FBI actually issued a handbook on working with psychics”.

If it’s real enough for the authorities, there must be some truth to matter. So, what really happened in these real-life cases and how true are the Conjuring films?

Ed and Lorraine are the Mulder and Scully-esque ghost-fighting duo at the heart of the franchise. It’s well known that these two were real paranormal investigators. Ed described himself as a ‘demonologist’ while Lorraine professed psychic abilities as a ‘clairvoyant’ – someone who can perceive historical information through extrasensory interaction – and a ‘medium’ – someone who can communicate with spirits.

They were both born in Connecticut in the late 1920’s and raised in the Roman Catholic Faith. Both knew there was something different about them when they started having paranormal encounters in their childhood. Ed claims to have seen the spirit of his family’s landlady who had died the year before when he was just five. Lorraine says she could see the future at age 12, and would tell the nuns at her school about their differently coloured auras.

Meeting when they were just teenagers, the Warrens were married in 1945 and had a daughter, Judy, in 1950. In 1952, the Warrens founded the New England Society for Psychic Research and would offer their services in paranormal investigations to those who appeared to be suffering from hauntings or possessions. They claim to have investigated over 10,000 cases across the world.

They gained notoriety through being the first psychic investigators to talk openly about their work and they lectured in colleges, giving talks on demonology and playing audio recordings and showing pictures of their work. This is the kind of thing we see them doing in the Conjuring films.

Ed Warren performed a number of exorcisms throughout his life and became the Catholic Church’s only recognised non-clergy expert on demonology. He passed away in 2006 while Lorraine continued to investigate cases on her own until her death in 2019.

The above is all true. There really were a pair of paranormal investigators going around helping people with ghostly problems. As to the validity of the actual cases, well…

Amityville is the case that appeared to stick with the Warren’s the longest and brought them to international fame. The house in New York in the 1970’s is the one house that Lorraine said she would never visit again.

The story goes that in 1974, George and Kathy Lutz moved into the house on Long Island, about an hour East of New York City. They got the house for a bargain price and moved in with their three children.

They soon realised why the house was so cheap, as apparent demonic forces quickly went to work on them. The previous owners, the DeFeo family, had been brutally murdered in their sleep by their son, Ronald Jr, who killed his parents, two brothers, and two sisters. Some of that demonic energy stuck around.

The Lutz family quickly found this out as they said they experienced mysterious bruises appearing on their bodies, red-eyed creatures watching them from the shadows, strange odours, cold spots, and green slime oozing from the walls.

George was known to dabble in the occult and would apparently wake up every morning at 3:15 am, the same time that the murders took place. He also claims to have seen his wife and children levitating from their beds. The family were so scared that they left the house less than a month after moving in.

“Amityville was horrible, honey. It was absolutely horrible”, Lorraine told Yahoo! “It followed us right straight across the country. I don’t even like to talk about it. I will never go in the Amityville house ever again”.

The case, that the Warren’s really worked upon, has been dissected untold times, with sceptics certain that the events were made up. Perhaps the biggest piece of evidence to debunk the whole thing is the fact that the Lutz’s had serious financial issues at the time.

Their former lawyer, William Weber said in 1979 that he and the Lutz parents made the whole horror tale up “over many bottles of wine” in order to sell a story, which they did. The case was made into the acclaimed Amityville Horror book and later film and then remake.

The first Conjuring movie is based upon the real-life experiences of the Perron family. Roger Perron and his wife Carolyn bought a 200-acre farmhouse in Rhode Island in 1970 and moved in with their five daughters.

The family actually lived in the house for 10 years and experienced a number of strange ‘paranormal’ phenomena including objects moving around the house, disembodied voices, and the smell of rotting flesh.

Apparently, the girls first thought the spirits were benevolent, and speak about being tucked in and kissed on the forehead by a motherly spirit. Other spirits soon came who were less kind and the family ultimately found themselves at the mercy of a witch called Bathsheba Thayer.

This is the same witch from the film who apparently stabbed the real-life Carolyn in the leg with a sewing needle. The Warren’s, who were investigating the haunting, connected this event to the real historical event of a woman called Bathsheba who had lived in the house in the 1800s. She apparently killed a baby with a sewing needle although was never convicted. The local town saw this as evidence she was in league with the devil.

Carolyn Perron wrote a book about her experiences and very much believes that she was – and remains – haunted by the spirit of Bathsheba. The property they lived on has been the site of suicides, hangings, murders, drownings, rapes, and other deaths but it is a very old property and you would probably expect some things like this to occur.

The current owner of the house, Norma Sutcliffe, says that they have had some strange experiences in the home, but they’ve never thought it was haunted. Norma was actually very upset with the release of the film, claiming filmmakers never told her about the release of the film and she now has to deal with tourists and thrillseekers trespassing on her property to get a glimpse of the real life story. She released this video in which she attempts to debunk all of the claims that Carolyn Perron made about the house.

This is the case that the third Conjuring movie is based upon. It deals with the case of Arne Johnson, a teenager from Connecticut, who stabbed his landlord to death during an argument. It was the first recorded murder in the history of that area and made international news when Johnson claimed that “the devil made me do it.”

His legal team, aided by the Warrens, mounted a legal defence that the man was innocent of the crime as he was possessed by the devil at the time.

“This really is the darkest Conjuring movie yet,” Chaves tells us. “There’s a real victim here, there’s a real man who was killed, and we are telling the story of the murder”.

The story goes that the Warren’s were investigating a possession of a young boy, David Glatzel, who was the 11-year-old brother of Johnson’s fiancee. David had visions of a man with black eyes, horns, and hoofs, who would torment him. According to the family, David would hiss, spout passages from the bible, and be thrown around the room by unseen forces.

After attempted exorcisms by priests, in which the Warrens assisted, Johnson began taunting the spirits, telling them to take possession of him instead. He later claimed to have started seeing demons and Deborah, his fiance, said that he started exhibiting the same symptoms as her brother. Prior to the murder, Johnson had never had issues with the police and had reportedly been friends with his landlord.

“Debbie Glatzel, she’s the sister of David who’s possessed, she was there during the murder, she witnessed the murder, and she testified that he was possessed,” Chaves says. “She stood by him this entire time.”

“They were married their entire lives. We interviewed them and they stuck to their story. It was one of the darkest points of their life but, talking about faith, it’s the faith that they put in each other and their love persisted.”

We won’t reveal the ending of the case here, though it’s out there if you want to look it up, however the Warren’s helped to write a book about their experiences which was vehemently rejected by David’s brother, Carl. Carl sued the Warren’s for attempting to exploit what he saw as his brother’s mental illness and claimed that they had made the whole possession thing up.

How Real is Any of This?

Chaves said that before directing The Conjuring: The Devil Made Me Do It, he was simply a fan of the films. “Up to this point, I didn’t really have to answer the question of whether I believed in it, it wasn’t really brought to the forefront.

“This is a very different case than the other Conjuring movies… all of a sudden, yeah, I had to ask myself, growing up Catholic, what do I believe? What is going to be my point of view on this movie? That is a question that I honestly still have been wrestling with.

“I think we all wrestle with our faith… ultimately, what I believe has to take a backseat.”

The Warren’s have just as many detractors as they do believers. While much of what they claim is difficult to substantiate, it’s clear that some of the people involved in the cases really do believe that what they experienced was supernatural.

That’s not something that ought to be relied upon in cases where adequate mental health care needs to be front and centre, but for some of these experiences, and there are thousands of them, there are just a few details that remain fairly unsettling.