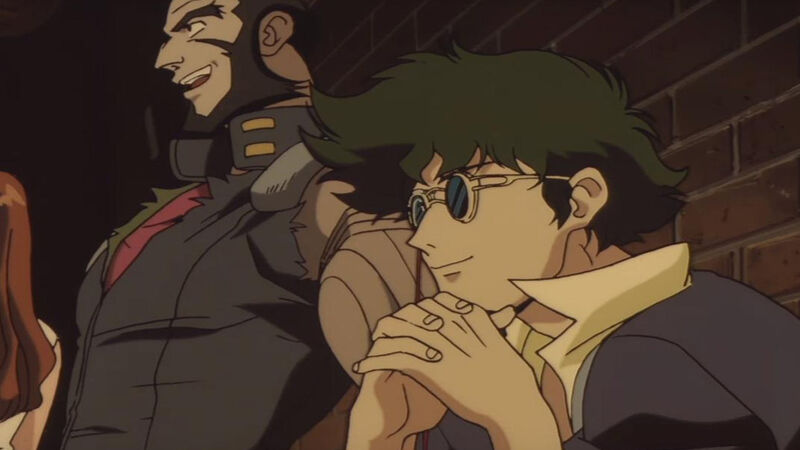 ‘Cowboy Bebop’: The Movie and TV References You Missed 20 Years Ago

Check out any of Cowboy Bebop creator Shinichiro Watanabe‘s work, and you are bound to find an unbelievable number of movie and television references. The talented director is known for his love of pop culture, often littering his work with Easter eggs for eagle-eyed viewers to discover.

To list every single reference in Cowboy Bebop would be an insurmountable feat, which is why we focused on the subtle ones that you may not have picked up on 20 years ago. Here are the movie and TV references you likely missed when the show originally aired.

It makes sense for a futuristic show about space to reference the most popular sci-fi TV franchise of all time. Watanabe doesn’t just reference the show once; he does so several times. At the beginning of Session 11, “Toys in the Attic,” we hear Jet Black say, “Space travel log 0968,” a clear callback to the stardates given at the beginning of each episode of Star Trek.

We get another reference in Session 15 when we finally get a glimpse of Faye’s cryotank. If you look closely, you will notice that the serial number on her tank is NCC-1701-B, the same serial number that appears on the third USS Enterprise from Star Trek Generations.

However, the most obscure Star Trek reference occurs in Session 19. When Spike’s spaceship, the Swordfish II breaks down, he takes it to Doohan, an experienced mechanic on Earth. If the name Doohan sounds familiar to you, then you are definitely a Trekkie. The character is a reference to James Doohan, the actor who played the Enterprise’s chief engineer Scotty. Mechanics just don’t get any better than that.

The references in Cowboy Bebop’s famous episode “Toys in the Attic” are numerous. But the most overt has to be Ridley Scott’s sci-fi, horror classic Alien. A blob-like creature takes out members of the Bebop crew one by one, just as the Alien does to the USCSS Nostromo crew.

As the only crew member capable of moving, Spike prepares for war with the creature. In true ‘80s fashion, we get a dramatic scene where Spike arms himself with a ton of weapons just as Ripley does before heading off to rescue Newt in Aliens.

In his arsenal, Spike carries a handheld motion tracker and a flamethrower, both prominently used in the two Alien films to takedown the xenomorphs. (Although Spike comically uses his to attempt to light a cigarette.) The episode even ends similar to the film.

When Spike discovers that his secret stash of Ganymede Rock Lobsters has spoiled, resulting in the mutation that created the blob creature, he gets rid of the contaminated refrigerator by opening the air hatch, expelling into space just as Ripley does to the Alien Queen in Aliens.

When the Bebop crash lands on the moon Io in the episode “Mushroom Samba,” Edward and Ein find themselves in the middle of a homage to blaxploitation films from the ‘70s. As the two search for food, they run into a bounty hunter named Coffee. She is after a man who deals hallucinogenic mushrooms.

The femme fatale character, with her flawless afro and foxy ‘70s-style clothing, is based on Pam Grier’s portrayal of Coffy in the film of the same name. Not only do Coffee and Coffy’s names sound similar, they are both vigilantes who hunt down drug dealers.

However, Coffy isn’t the only blaxploitation film referenced in this episode or the only bounty hunter chasing down the mushroom dealer. Shaft, another character rocking a perfect afro and purple suit, also wants to take the dealer down. He sold Shaft’s brother a bad batch of mushrooms that caused the poor guy to laugh to death. (There are worst ways to go.)

Unfortunately, despite how badass their big screen counterparts are, the two never managed to catch their man. Instead, they get into a car crash inadvertently caused by Ed and Ein’s scuffle with the dealer, and that’s the last we see of them.

In “Asteroid Blues,” we meet a couple, Asimov and Katerina, who dream of leaving the Tijuana asteroid to start a new life on Mars. To help Katerina achieve her dream, Asimov leaves the crime syndicate he worked with. However, not before stealing a large supply of the drug Bloody Eye from the organization

Of course, the syndicate isn’t too happy about this and sends hired guns to kill Asimov at a local bar. The job sounds easy enough until Asimov uses the Bloody Eye on himself. With his senses and reflexes temporarily heightened, Asimov quickly dispatches his foes, just as El Mariachi does at the Tarasco bar in Desperado.

Asimov and Katerina even look like El Mariachi (Antonio Banderas) and Carolina (Salma Hayek). Unfortunately, unlike the end of Desperado, the two meet a tragic, Thelma and Louise-type fate at the hands of the police before they can escape.

It’s no secret that Shinichiro Watanabe drew a lot of inspiration from the classic anime Lupin III. In fact, Spike, Jet, and Vicious bear a slight resemblance to Lupin, Daisuke Jigen, and Goemon Ishikawa, respectively.

Watanabe sprinkled references to Lupin III throughout Cowboy Bebop, even having the one-off antagonist Wen in “Sympathy for the Devil” wear the gentleman thief’s trademark green blazer, black shirt, and yellow tie.

However, there is one subtle Lupin III reference you may have missed. In the episode “My Funny Valentine,” as Faye and Whitney race to escape the collection agency they run into on the road, their car passes by a yellow 1957 Fiat 500.

The same car that Lupin and his gang travel in. The reference may have been brief, but it gave us a glimpse of the crossover we didn’t know we needed.

What better way to end this list than with a Bruce Lee reference? Session 2, “Stray Dog Strut,” sends Spike to Mars to pursue a bounty for a serial pet thief. (Yes, apparently that’s a thing.) After a wild chase scene, Spike and the thief, Abdul Hakim meet on a bridge and get into a fight. The scene itself pays homage to the Bruce Lee film Game of Death.

Spike uses Lee’s Jeet Kune Do fighting style against Abdul Hakim, who looks and fights like Kareem Abdul-Jabbar in Game of Death. Lucky for Abdul Hakim he didn’t possess the same sensitivity to light that leads to Abdul-Jabbar’s defeat. Although, he did end up crashing into a police precinct and getting arrested.