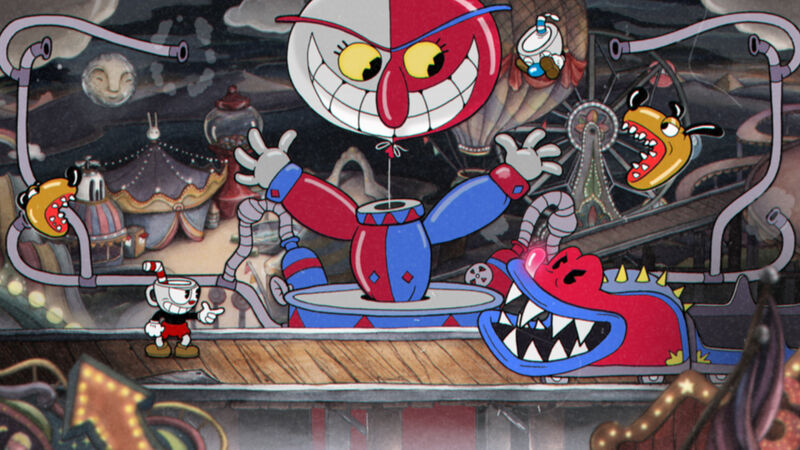 ‘Cuphead’ Interview: How 3 Corporate Workers Made 2017’s Most Exciting Indie

Despite how wonderfully varied video games can be, it’s not often that someone sees one and mistakes it for anything other than a piece of interactive entertainment. Yet, the first time we laid eyes on Cuphead, that’s exactly what we did.

Inspired by the kind of surrealist cartoons produced by Disney and Fleischer Studios in the 1930s, this modern indie game doesn’t just look similar to its aging inspirations – it somehow manages to feel like one of their peers. The reason for this? Every single frame in Cuphead has been painstakingly drawn and inked by hand. Thanks to its creators’ unwavering attention to detail and the game’s brilliantly bombastic jazz soundtrack, playing this stunning 2D side-scroller simply feels like navigating a living, breathing cartoon.

If an indie studio managing to create a game that’s indistinguishable from early Disney wasn’t already impressive enough,  Cuphead was made by just three people. Thanks to the staggering ambition of this anticipated project and the Canadian developer’s modest team size, many gamers were understandably skeptical about whether Studio MDHR’s ambitious debut title would ever actually be completed.

Now, three years after the game’s show-stealing E3 debut, those are all worries of the past, because this Friday sees Cuphead finally making its way to Xboxes everywhere.

Curious to find out about the incredible story behind this unique indie title, we approached Cuphead’s producer, Maja Moldenhauer, to hear how it all began.

From The Corporate World To A World Of Their Own

Back in the 80s, two Canadian brothers would spend almost every waking hour playing video games together. Losing countless days to fiendishly difficult run-and-gunners like Megaman and Gunstar Heroes, Chad and Jared Moldenhauer always said that when they grew up, they’d make their very own game together.

Despite knowing exactly what they wanted to do from a young age, unfortunately, real life got in the way. With game development seeming like an almost impossible field to get into, these two pixel-loving kids grew up and moved on. Chad eventually founded his own marketing and advertising agency and Jared found himself a job in construction.

For a long time, it looked like their paths had been set in stone. It wasn’t until many years later that they watched a documentary that changed their lives forever. “When Chad and Jared saw Indie Game The Movie, everything changed for them,” Producer Maja Moldenhauer explains with a smile.

“When they were teenagers, games were just AAA titles that had to have hundreds of people working on them and [needed] millions of dollars. Seeing the success of titles like Braid and Super Meat Boy, they were like ‘ OK This is tangible! This is where the industry’s going now… this CAN be a realistic dream.’”

Inspired by the success of other bedroom-made passion projects, the dynamic duo quickly decided that they wanted to recreate the hair-tearing difficulty of 80s side-scrollers. With Chad and Jared both growing up on a diet of surreal 1930s cartoons alongside these fiendishly challenging games, the aesthetic they chose for their debut title was a bit of a no brainer.

After getting home from their day jobs, Chad soon set about drawing the game’s art while Jared focused on learning how to use Unity, slowly transferring those early sketched designs into a playable prototype. Yet, despite their best efforts, they quickly realized that something was still missing from Studio MDHR. After a few months toiling away at the game, they decided to enlist the skills of illustrator (and Chad’s wife) Maja Moldenhauer, asking her to join the team as Cuphead’s ink artist and producer.

“At the time, I was in the banking industry,” she says. “So as you can imagine [game development] was completely out of left field for all of us! But what brought us together is my love for art, same as Chad and the same with Jared.”

With their dream team now amassed, the trio’s real hard work was just about to begin. Intent on nailing the feel of the cartoons they all knew and loved, the team dug out their dusty VCR and intently scrutinized the 1930s classics.

“Being the biggest fans of those cartoons, we knew exactly what it should look like.. but we didn’t really know how to get there at the beginning,” explains Maja.

“Many, many hours were spent watching these cartoons, day in and day out,” Moldenhauer explains. “Pausing them on screens to study the pen weight. How were lines tapered? Pausing on the very next frame to watch the difference, printing things out, magnifying them in Photoshop to really watch how the lines shifted from one another… We did everything we could so that you really get that feeling of constant movement and fluidity in the game.”

With everyone still working full time jobs, Cuphead became a vacuum for their free time. Yet, even as more and more evenings and weekends became devoted to working on this ambitious game, the team refused to compromise in order to speed things up. “One of the things we keep getting asked is ‘why not do it digitally? We have the technology now and it would save so much time and money.’ But we just couldn’t get the look we wanted by going digital,” Moldenhauer explains. “You can’t get the variants in pen weights, you can’t capture human and error and flaw digitally, you can’t capture the chaos of ink on paper digitally.”

“I think that was a big part of [how we got the look right], remaining authentic to that era and how they did things.”

From Cutting Floor To The Showfloor

As their hobby started to slowly spiral out of control, StudioMDHR’s hard work soon began to pay off. A few years into development, the team got their first big break – a slot for a Cuphead trailer at Microsoft’s E3 2014 conference. Competing with huge publishers and experienced developers, the studio expected very little from the event. Nervously, the team travelled to L.A, completely unsure as to whether there would be any appetite for their quirky little game. As it turned out, there was a more than a healthy appetite for this Canadian curiosity.

“We were just dipping our toes into the water to see what the reception would be,” remembers Moldenhauer. “The worst case scenario is [E3] wouldn’t pan out and we’d all just have to go back to the corporate world and work our way back up again.” As their brief trailer played to thousands around the world, however, journalists and gamers alike were entranced by Cuphead’s captivating art style.

“Our first E3 was a very pivotal moment for our careers. Thanks to the reception we got, we decided to leave our day jobs and go into [game development] full time.”

Now, three years and a ton of hard work later, Cuphead has has blossomed into a far bigger game than its creators originally envisioned.

“I was just going to be 8 bosses, a Megaman-style select screen, no overworld, no interactive NPCS, nothing like that, ” explains Moldenhauer. “But as our fanbase grew, we had the courage to jump in a little bit deeper. We thought you know what? This is our one shot lets make this a full game and not just a little sampler demo. We didn’t want to be sitting at 65 -retired – thinking, what if we  had actually done this [with Cuphead] instead?”

That’s (Not) All Folks

Despite turning their basic boss battler into a fully-fledged platformer and the full schabang coming to Xbox and PC in a matter of days, Moldenhauer reveals that Studio MDHR isn’t completely done with Cuphead just yet. “Chad and Jared grew up playing co-op together and they were like, OK this game HAS to be co-op. So, while it’s local couch coop for now, [we’re] looking into adding online at a later date.”

With their debut game finally out the door, Moldenhauer reflects on the difficult journey the trio has embarked on to get here. “You can’t fully grasp how much goes into making a video game just by being a fan,” she says. “We didn’t really know what went into this! I have an insane amount of respect for every single person that’s in this industry.”

As we tell her about how much we’ve enjoyed playing the game so far, she pauses, considering all that this little studio has achieved. “We’re just so proud. So proud of what this is and what we’ve made, that its stayed true to our vision. It’s just exactly what we’ve always envisioned.”