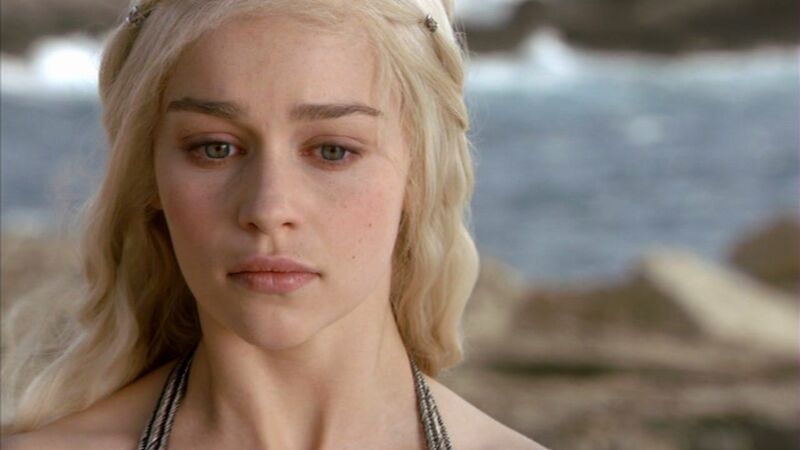 Daenerys Targaryen: There’s Only One Real Winner in the Game of Thrones

SPOILER WARNING: This article contains potential spoilers for Season 8 of Game of Thrones. Proceed at your own risk.

It was almost exactly a year ago that we were left reeling from the revelations in “The Dragon and the Wolf” – the Game of Thrones Season 7 finale. Littlefinger perished after a canny little bit of double-crossing at the hands of the Stark sisters, while the Night King and his army, which now includes a Wight Dragon (OMFG), took down the wall. Oh, and then there was the small matter of Jon and Daenerys sleeping together (incestuously, albeit inadvertently) after a fair bit of flirting. And THAT RIGHT THERE is one key factor in our reckoning that Dany is the number one candidate to end up on the Iron Throne. Let’s dive in…

Jon and Dany’s Baby Is The Prince That Was Promised

First, let’s get this straight. There’s no baby (yet) and no confirmation that Daenerys is even pregnant. But there’s every possibility that she is after cosying up with her irresistible nephew in the Season 7 finale, alongside heavy hints that she’s got a bun in the oven. It’s been seeded, if you’ll pardon the pun.

Let’s not forget that there’s also been plenty of speculation over the identity of the Prince That Was Promised throughout Game of Thrones. And nobody as yet has emerged to claim that role. The prophesied saviour – who is presumably the key to defeating the Night King and saving the world from darkness – will be “born again amidst smoke and salt to make dragons out of stone”, according to Melisandre. In the novels, the Red Priestess refers to a “bleeding star” as critical to the prophecy.

Also known as the Azor Ahai (if indeed the two are one and the same – there’s some doubt), this legendary figure in his original incarnation defeated the Great Other, or god of darkness, to save the world. Melisandre’s fellow Lord of Light worshipper Thoros of Myr, like her, buys into the prophecy. He says the chosen one will “reforge the great sword Lightbringer that defeated the darkness those thousands of years ago.”

8. Jon Snow
> protect him don't let him die
> is azor ahai no one can tell me otherwise
> will probably kill daenerys to make lightbringer
> we love a prince that was promised
> if he doesn't sit on the throne in the end it wasn't worth it pic.twitter.com/gt06O9Tqmy

Following? Lovely stuff. Some people have both Jon and Dany pegged as candidates for the Prince That Was Promised. It’s not a stretch to see why. Jon has been ‘reborn’ already (resurrected by Melisandre), and was originally birthed under a ‘bleeding star’. Remember the flashback to Jon’s mother, Lyanna Stark, in labour? Ned Stark lay the ancestral sword of House Dayne, whose bearer he just killed and which was forged from the metal of a fallen star, by the blood-stained bed in which Jon was born. Et voila. A neat little touch.

Dany, meanwhile, has already proven able to hatch dragons from stone, fulfilling that part of the prophecy easily. But then there’s the fact that she was born on Dragonstone – which qualifies her for the salt and smoke part of the prophecy, the island being volcanic (smoke) and also being surrounded by the sea (salt). She was also ‘reborn’, of course, amid the smoke from Khal Drogo’s funeral pyre. Both Jon and Dany, of course, also have the hero credentials to fulfil the role. But it all adds credence to the notion that it will be their offspring, not them, that will bear the responsibility of vanquishing the Night King.

There have been hints that the true saviour hasn’t yet been born, so this would make sense. And if this is the case, it would elevate Dany’s significance in the series further, making her a shoe-in as the new ruler of Westeros – not only is she the Mother of Dragons but she’d also be mum to the chosen one. Perhaps she’ll marry Jon, who currently stands as the rightful heir to the throne but who we reckon could die before Season 8 is out. Then, she could be left to rule legitimately in his stead.

It’s a Show About Women Overcoming the Toxic Patriarchy

If you look at the way women were both portrayed and treated early in the series and compare that to how we see them now, it becomes apparent that the show has been setting its women characters up to fight back against the oppression and objectification they’ve suffered under Westeros’s patriarchal structure. And if that’s the case, it makes sense to put a woman on the Iron Throne to usher in a new matriarchal age – or better still, one in which equality reigns. Which brings us to Daenerys as the most obvious candidate to take the hotseat. She is arguably the most successful example of a woman in Game of Thrones overcoming patriarchal dominance, of all the women we’ve seen attempting to overturn their oppression.

One such woman is Cersei Lannister. To see Cersei end up on the Iron Throne would mean a corrupt, unhinged and despotic ruler, which wouldn’t fulfil the purpose of a series that seeks to denounce patriarchal ideology and put women on top. She’s a victim of the patriarchy and though she’s battled against its oppression of her, she’s continued to suffer because of her own actions.

Cersei is a woman who has been punished for her life choices. Because of her incestuous relationship with her brother Jaime, she was forced to complete a Walk of Atonement. Who could forget the humiliation and torment she suffered as she was forced to walk naked outside through a baying crowd pelting her with faeces and other gross bodily emissions and missiles? It’s easy to imagine how an experience like that would turn a woman into one bent on vengeance. All, of course, while her brother gets away with the part he played in the relationship. Officially at any rate – you could argue he’s paid in other ways. This woman’s experiences at the hands of the patriarchy would grind anyone down – and she’s fighting back in the most extreme way, having mustered all her fear, hate and vitriol to become a supremely powerful yet tyrannical force – one we definitely love to hate.

Sansa too has been seriously affected at the hands of men and the patriarchy in GoT. First becoming engaged to abusive tyrant Joffrey Baratheon, then finding herself married off to Tyrion by way of helping her escape her fate, then manipulated by Petyr Baelish into marrying Ramsay Bolton who proceeded to rape her nightly, Sansa has suffered. She’s consequently undergone a massive transformation and is now steely and determined, and capable of gross deception and bloody revenge. It’s not clear how her character might develop in Season 8. However, if that icy stare in the little snippet of footage released by HBO recently is anything to go by, it looks like she could be locking horns with Jon, and maybe Dany too. Sansa will complete her own arc by the series close, but it won’t end with her taking the throne.

Similarly, Arya has played too much by the unofficial Westerosi rulebook to make her a viable candidate to sit on the throne. Arya’s journey has seen her become an assassin as she ticks names off her lengthy kill list, eliminating those who have crossed her. Arya’s thirst for revenge has seen her set foot too far over the line to warrant a valid claim to the crown. She may well survive, as Maisie Williams’ Instagram post (above) suggested, but she’s an example of a woman whose decisions during her own personal fightback, influenced heavily by the patriarchal world in which she operates, means she won’t take the throne.

Daenerys, in contrast to all these other women, has overcome her downtrodden beginnings as the meek and mild little sister traded, essentially, as a sex slave. But using all the resources available to her, she turned her would-be rapist hulk of a husband, Khal Drogo, into a loving and gentle partner. On his death, her transformation into the powerful leader and warrior she’s become in latter seasons really began to take shape, as she woke her dragons and began her journey in pursuit of the Iron Throne.

She’s grown from strength-to-strength as the series has progressed, proving her worth in all situations – including the moment she killed the brutal Masters at Meereen. Though it may have seemed a tad harsh, it revealed a necessary savviness about the way the world works and an ability to blend a mostly moralistic standpoint with realistic action. She has proven herself to be the firm and humane woman needed at the helm of the new world order.

When we interviewed Ramsay Bolton actor Iwan Rheon after Game of Thrones Season 7 ended, he told us it was “inevitable” that Daenerys Targaryen would end up on the Iron Throne. And who would argue with the man who played the most sadistic character ever to set foot in Westeros? Not us.

Game of Thrones will return for Season 8 in the first half of 2019.