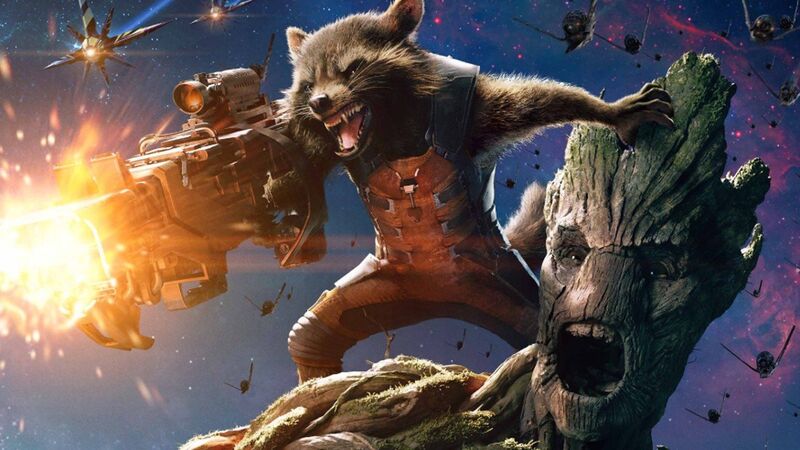 Forget James Gunn, Dan Abnett Is the True Hero Behind ‘Guardians of the Galaxy’

When the MCU burst onto the scene back in 2008, it was no surprise that Disney decided to wheel out Marvel’s household names first. With flicks like Iron Man, Thor, and Captain America: The First Avenger delighting audiences across the globe, it looked like the MCU would keep playing it safe with its hero choices. But then, something weird happened. Amid rumours swirling of B-tier heroes like Ant-Man and Doctor Strange eventually hitting the big screen, Marvel confirmed its next film would be something called Guardians of the Galaxy.

Where previously the mere mention of a Marvel movie sent Redditors spiralling into an online frenzy, the response to Guardians was less gut-bursting excitement and more… well, a collective shrug. Why? Because no one had ever heard of them.

Yet, for Dan Abnett, this announcement marked the biggest day of his life. A British writer renowned for his work on Warhammer 40 K novels, Doctor Who, Alien: Isolation, and a few DC series, Abnett was suddenly tasked with building his own new Marvel series. So, like any creator worth his salt, he dug deep into the most obscure corners of the Marvel treasure chest for inspiration.

Rallying Behind the Rejects

“When I wrote the Guardians comic for Marvel about 10 or so years ago, nobody had heard of them,” explains Abnett. “They were characters that had been in the back of the Marvel toybox for about 20 years. They were fourth or fifth tier characters and NONE of them had worked individually… but I had personally always found them appealing.”

Liking what he saw in Star-Lord, Rocket, Groot, and a few other inter-galactic rejects, Abnett was the first person to see the potential of putting this ragtag group of nobodies together.

“When Marvel said to me ‘Can you write a cosmic book?’ that is to say superheroes in space, I went around and just picked up all these old characters that no one cared about and put them together. I borrowed the name Guardians of the Galaxy from a different team, I put Rocket and Groot together for the first time and Star-Lord and just put characters together who had never worked alone into a little team and then launched this comic, which Marvel itself didn’t care about.”

From Forgotten Heroes to Blockbuster Behemoths

Because Marvel had no expectations for these obscure and haphazardly paired heroes, Dan Abnett had complete creative freedom to do whatever he pleased with Star-Lord and company.

“If I’d been writing Iron Man or Spider-Man, they would have cared deeply about what I did in every issue because they wouldn’t want me to damage their important property. But with Guardians I could do anything I liked, so I did. We got a critically acclaimed run out of the comic and suddenly Marvel Studios went, ‘We’re going to make that as a movie,’ which stunned everybody. [None of us ] saw that coming.”

And now that Disney was adapting Abnett’s oddball comic series into a major motion picture, James Gunn needed some advice. And so who did they turn to? Daddy Guardian himself, Mr Dan Abnett.

“In the early days, Marvel was fairly notoriously bad at keeping the comic creators in the loop because the studio was a separate place. But James Gunn was making the film over here and he got in touch and said, ‘I’m making the film here, I know you’re British, do you want to come and visit? Because it’s your version’. So, I got to visit the set on a couple of occasions and meet the cast in costume, which was, I have to say, an exciting but freaky experience, to actually walk on spaceships…. to walk inside my own imagination. It was a very, very strange… but rewarding day. I think any day when you get high-fived by Zoe Saldana in her full Gamora costume, then you go, ‘Yeah, that’s a day I’m not going to forget’.

Getting the Credit Abnett Deserves

With many studios merely doing their own thing, having Marvel Studios seek him out meant a lot to Abnett. “It was just very nice to have that recognition and to be included… to get the tacit approval of and be shown how things worked. I think that’s lovely.”

With comic creators largely living vicariously through their characters, attending the Guardians of the Galaxy premiere in London also proved a surreal and unforgettable experience for Abnett.

“It was in Leicester Square. You would turn up with your VIP ticket and they go, ‘Walk down there’ and you go, ‘But that’s where all the famous people are going’, ‘No, down there. Walk down there’ and people are calling at you, well, they’re not calling to me, they’re probably calling out to Chris Hemsworth who is just over there. It’s not me they want… But then I was delighted when I got home the following day to discover some people had been calling out for me, because they recognised me!”

It turned out though, that wasn’t the only nice surprise that Abnett would get that day.

“Marvel also, by that way, hadn’t told me they’d put my name in the credits — and near the front of the end credits. So I sat there watching this film, went, ‘Oh my god, that’s brilliant, that’s so fantastic’ some of the things I invented were there on the screen, then the credits rolled and went, ‘From the comic by Dan Abentt…’ and I went, ‘Look!’ Now I’ve had a moment!”

Abnett continued to work on Guardians, but as a victim of his own success, he now had far less creative freedom with his now massively popular creation.

“It’s become very, very big. Writing Guardians, whilst still fun, is less fun [now] because it’s suddenly an important property and they won’t let you do things with it, in the wild, crazy, ‘I can do anything’ freedom I had back ten years ago.”

Making a Lore of Legend

Now, though, Abnett is doing the reverse. Working with Riot Games, Abnett is creating a brand new, fleshed out lore for one of the world’s most popular video games — League of Legends. Despite 100s of millions of people playing as this MOBAs diverse cast of characters, little is actually known about who these beloved heroes are. So, when approaching writing the official short story for the game, “League of Legends: The Lure”, Dan was almost given the same amount of freedom as he was with Guardians.

“There was a little bit of some of the science fiction work I’ve done at 2000 AD and a little bit of a nod to the Guardians of the Galaxy stuff I did for Marvel, just in that sense of urgent and exciting activity and really characters you could anchor onto very, very quickly. We wanted them to be quite dynamic from the moment they appear.”

“I can’t think of a big global franchise world that has not very, very happily and successfully supported a fiction line or a comic line or whatever to run alongside it. Because if you’re a fan, you’re a fan of the whole thing and you want to see that. I wanted to see what you can do in a self-contained way that hopefully will tempt people to want to look at more, and we’ll go from there. Which I think is great. It’s why my fingers are crossed that people will like it. I could see this as being something that could really catch on.”