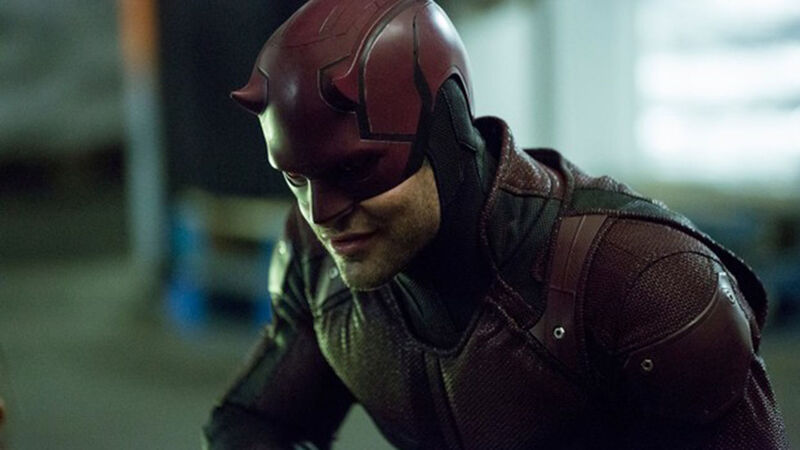 As television shows age and season counts tally up (even streaming ones), showrunners must find a way to keep storytelling fresh. For Daredevil‘s third season, that meant delivering the same press-worthy action sequences while exploring new methods of conveying information.

I was able to catch up with the cast and creators of Daredevil Season Three on behalf of FANDOM to chat about their favorite moments while filming Netflix’s next chapter of its solo ‘Man Without Fear’ serial. Specifically, each performer recalled the moment they knew Season Three would be a different, more evolved beast. Not a repeat of the successful Daredevil seasons of old. A playground of new ideas and avant-garde injections into Matt Murdock’s DNA.

Charlie Cox (Matt Murdock): “Episode Four’s fight sequence was an enjoyable filming moment for me, and also a very lovely full circle experience. In the first season, Episode Two, we did a fight sequence that that got a lot of press. We filmed that sequence very early on in the process, actually before we finished Episode One. We’d only been shooting for like two weeks, and I was still very much in training, very much in learning. I wasn’t able to do much of that fight. I did little bits, but that’s mostly Chris Brewster my stunt double. Whereas in [Season Three’s] one-shot — which is also a true one-shot and it’s double the length — the vast majority of that is me. Brewster for a little bit, but we were able to use me a load in that. It was a nice feeling having come that far.”

Erik Oleson (Showrunner): “[Season 3] is a twisty, turny conspiracy thriller that will have explosive action you don’t see coming. Episode Four has one of the more iconic Daredevil fight sequences. It’s a career highlight for me and for Charlie Cox as well. What we pulled off in that 11 1/2 minute ‘oner’ — a prison break sequence which has action and then goes into this really meaningful character scene and then back into more action — is out of its mind. The fact that Charlie Cox could pull that off in close sync with Chris Brewster — his stunt double — and with the guys behind the camera, with everybody, that was a fantastic tour de force of action. I would say that the action is at a high peak level [in Season 3].”

Deborah Ann Woll (Karen Page): “One of the things they did this year was POV shooting. What that means translating to the camera is that they shot very specifically to show whose point of view you were in. Through whose eyes are we experiencing each scene? I had a sequence with another character whose point of view is significant in this story, and it was fascinating to watch [production] figure out when there are power shift dynamics. When is it vital that we see this through Karen’s perspective and when does the camera literally wrap-around 180 degrees then flip sideways so now we get the other person’s perspective? Suddenly we’re in their point of view. We care more about what they’re noticing and seeing. We have an amazing Director of Photography and camera crew working with us this year. It’s just incredible what they can do. The thoughtfulness they put into enacting that deep point of view in the storytelling with their camera will make a huge difference in how people read [Season 3].”

Vincent D’Onofrio (Wilson Fisk): “There’s an area where I’m figuring out who ‘Dex’ is, Agent Poindexter, and that was a completely new feeling of getting into his head, being his head, and watching actors play out his life from when he was a child. Then his girlfriend. That felt different than any other season. Watching someone’s life play out as theater.”

Erik Oleson: “I was given a lot of creative freedom to expand [Season Three’s] storytelling technique. [Producers] were like, “You wanna do a ‘Theater of the Mind’ episode where Wilson Fisk is walking into the head of Ben Poindexter and seeing that like a stage play? Go for it.” I mean, who f–king does that? Look at [Jeph Loeb], he’s like, ‘Okay, sounds good to me. Go for it.’ I’m incredibly proud for that reason.”

“There’s another major episode where they also gave us complete freedom to go do this form-breaking episode which will, hopef- I’ll stop talking there, but that is so rewarding as showrunner when you have this crazy, wacky idea and you call up your bosses and say, “Okay. So, we wanted to spend this much money to go do this thing that nobody’s done before,” and they’re like, “Sounds great! Go do it.”

Pushing Matt Murdock to the Edge

Charlie Cox: “He gets pushed pretty far, but the reason I’m hesitating is that we almost find him in that place when Season Three starts. Physically and spiritually at the end of his tether. There’s a rebuilding process that takes place throughout the season. As that’s happening, his sanity and his moral compass take a real badgering. We hopefully feel like he’s become reckless in a way that we feel unsafe as an audience but he will end up doing what the right thing is, whatever that turns out to be.”

“What’s interesting about Matt Murdock is almost that Matt Murdock is the lie and Daredevil is the truth. The cane and the way Matt pretends to be visually impaired more so than he is to the rest of the world? That’s deceitful, that’s the lie. When he’s Daredevil, that’s what he’s capable of. There’s separation between those two, but it’s a very blurry line. Based on what we know about who Daredevil is and how he operates independently from Matt Murdock, yes there is a real chance that is dead and buried. The irony is — and this is what I think Erik Oleson did so well when he wrote Season Three — that now more than ever Matt is identifying with Daredevil over Matt Murdock. The fact that he’s incapable of functioning that way is a horrible paradox.”

Having Fun On Set

Jay Ali (Ray Nadeem): “There was a day my character, Fisk, and Poindexter first worked together. Vincent D’Onofrio had just done a play and I don’t know what planet he was on. He kept forgetting his lines, but he only did it on my coverage. When D’Onofrio forgets his lines, as Wilson Fisk, he just grins at you. You’re waiting, and that’s it. The brilliant thing was, the camera is over his shoulder. It’s on me. I have to say my line and walk past, then the camera circles back to Fisk’s face; but I’m laughing so much I’m about to squeak my line out. I was like, ‘I’m gonna crack up in front of Vincent D’Onofrio, and he’s gonna lose his shit.’ I couldn’t keep a straight face. Me trying to hold it in made it worse. So I go to speak the line, it comes out high-pitched, and he immediately starts cracking up.”

Vincent D’Onofrio: “We have a scene in an elevator where it’s a straightforward shot. We just have to come up and walk out. To this day — it was either Jay [Ali] or Wilson Bethel — they kept pulling us down to the basement each freakin’ time. We didn’t have to! All the doors had to do was shut! And every time we’d go all the way down. On and on and on. We’d go down to the basement. Down to the first floor. The first AD was fuming and they were both like, ‘Not us!'”