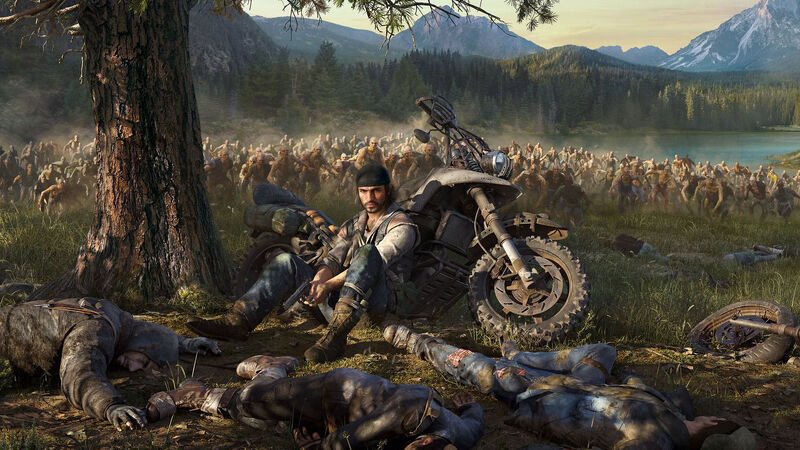 Let’s be honest. Releasing a post-apocalyptic-survival-horror-action-adventure not entitled The Last Of Us 2 in 2019 seems pretty ballsy, right? And yet here’s Days Gone, Bend Studio’s first console game since 2004 (though they’ve since developed a couple of decent Uncharted games for the PlayStation Vita), the story of an outlaw biker (Deacon St. John, played by TV sci-fi stalwart Sam Witwer) searching for his missing wife amidst a world – in this case, the leafy, mountainous Pacific northwest – overrun by infected creatures who’d really like to chow down on your tattooed neck. It’s basically The Walking Dead recast with Sons Of Anarchy actors. And it somehow manages to be at times a very good, quite bad and subsequently extremely muddled videogame.

That it can be all three of these things at once is testament to its sheer size of the thing. Make no mistake, Days Gone is a colossus of a game. Not in breadth (though it does let you explore a visually impressive dilapidated wasteland, only nudging you back to the task in hand via a series of broadcasts on Deacon’s portable radio).

Not in terms of depth (many of the game’s failings revolve around the repetition of Deacon’s allocated tasks, which loosely fall into the category of ‘fetch something’, ‘kill something’ or use your strange, never quite properly explained metaphysical skills as a bounty hunter to ‘find something’. We’ll be honest, with you, we never did receive a satisfactory explanation as to why Deacon has the ability to see ghostly silhouettes of things people have done via staring intently at objects he’s found on the floor…)

No, the reason Days Gone can veer so wildly from good game to bad game and then back again several times over, is because it is relentlessly, almost offensively long. We’ve seen thirty-hours bandied about as the average playtime, but that feels wildly optimistic and almost certainly doesn’t include any of the optional side-missions. There were several times during our playthrough where we were certain we were approaching the crescendo of the story, only to transition to a new environment, or have new antagonists introduced to us, which – far from making our hearts soar – made our time with the game feel much more like a chore than we’re sure the developers intended.

Firstly, the story is flabby and could have been told just as effectively with numerous chunks snipped away. Secondly, as outlined prior, there’s just not enough variety in the tasks presented to keep a player’s attention throughout the time allocated to it. And thirdly… well, unfortunately, the story being told by Days Gone is cliched, plagiarized (fans of end-of-days lore will find little to be surprised by here), hyper-machismo guff.

From the moment Deacon leaves his wife, bleeding out on the floor of an evac helicopter, to escape the opening night mayhem of the infection in tandem with his best mate Boozer, Days Gone plays out a bit like a Dan Brown novel. In Days Gone, women don’t act like women, but like a man might like women to act. In fact, women don’t get a great showing in Days Gone at all, only existing to be rescued, tortured, or often a little bit of both. Deacon may exist in a cruel world, yet he’s so often in the right, even when what he’s doing is really quite wrong, that for all the stories length, there’s really very little evolution in his arc, and to make matters worse, the personalities of the characters he encounters along the way are wafer thin.

Still, at least Deacon is a hero who’s mostly fun to play as. He’s sassy. He’s sometimes even funny. But as inoffensibly likable as old Deacs might be, endlessly muttering “sonofabitch” under your breath does not constitute a personality. When the game finally releases you from its grip, you’ll have learned little about him you didn’t know within the first few hours.

There are other quibbles. The game has a save system meaner than the fall of civilisation; travel ten minutes to a destination, only to be engulfed by ‘Freaks’ (which is the vernacular for zombies here) and the restart will make you ride those ten minutes again. Likewise, for a game that makes a bit fuss about how its changing seasons and time of day can affect variables within a mission (which beyond their being a few more infected at night, really doesn’t deliver the variety of gameplay that has touted pre-release), Days Gone can be awfully unintuitive. Several times during play we would run to a destination, only to be told that to proceed further we would need our motorcycle. We would dutifully trek back to get our motorcycle. We would return to the destination. Then we’d be told that we didn’t have enough petrol to complete the objective. We’d wander the wasteland looking for a petrol can. We’d die. Then we’d have to start the segment from the very beginning again. Much of Days Gone’s problem is that it often forgets that a game should be fun.

All of this is a shame because there is undoubtedly an enjoyable experience lurking within this bloated adventure. For starters, as you may have ascertained, a game about bikers means you get to ride a motorcycle (you can tell we know what we’re talking about here). Yet, despite being a bit of a basic badass simulator, in a world of diminished resources, being a biker means players have to forage for petrol in order to keep their motorcycle running. This means that often, if you’re not keeping an eye on your fuel tank, you can break down while fleeing from a swarm of freaks on your tail, whooping and hollering and flailing their talons. It creates an experience that is as close to the terror of good zombie cinema as we’ve ever played in a videogame.

Bend should be commended for it. Ditto, the experience of taking on – and indeed, taking down – a horde, in which there literally hundreds and hundreds of freaks on screen at any one time, may well be one of survival horror’s finest moments. These encounters are nothing short of thrilling. Credit should also go to Nathan Whitehead’s broody and atmospheric score. And to the voice actors. In fact, until you really dig into this world and realise the flaws in gameplay, Days Gone feels like a product of the highest quality.

Is Days Gone Any Good?

Ultimately, Days Gone is best described as an infuriating-if-enjoyable mess. It offers both a good central tenant of an idea and a unique take on a saturated genre, but is subsequently let down by dated storytelling, unnecessary bloat (the level-up system is so ineffectual you may question why anyone bothered to include it) and an investment in time and patience that really doesn’t come anywhere near to justifying the eventual pay-off.

If you’re wanting something to fill your time before the arrival of Naughty Dog’s upcoming epic, then Days Gone may serve a purpose. There is some fun to be had churning dirt on Deacon’s hog, no doubt. But, while we’re yet to go hands-on with the further adventures of Ellie and Joel, we’d be amazed if when it does arrive, that game didn’t teach Days Gone a host of lessons about storytelling, gameplay and all the rest.