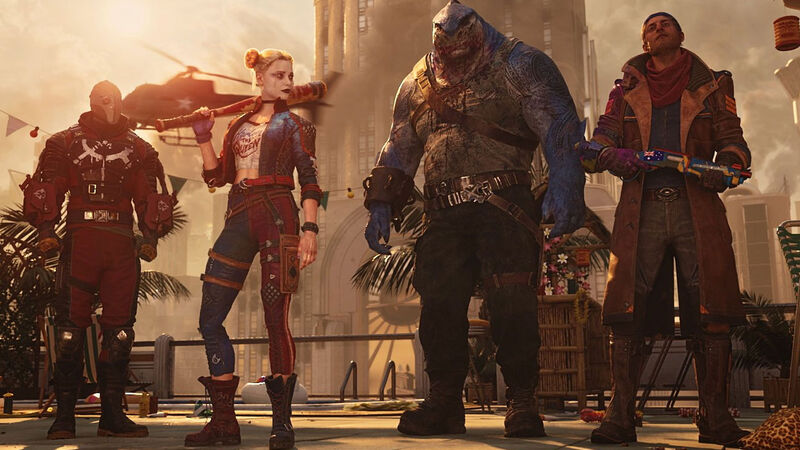 When fans weren’t rightfully losing their minds over the first footage from James Gunn’s The Suicide Squad or Matt Reeves’ The Batman, DC FanDome treated us to the next era of Warner Bros’ gaming vigilantes with Gotham Knights and Suicide Squad: Kill the Justice League. There’s a definite theme of killing the old and in with the new here, as fresh squads of playable heroes and villains are at the forefront of both adventures. Want to know what to expect before you suit up? Let’s take a look.

Since Warner Bros. Montreal has been teasing the next Batman game for literally years, we’ll start with Gotham Knights. The stunning cinematic reveal explained that in the aftermath of Bruce Wayne’s death, four of his most trusted allies are tasked with defending Gotham against the supervillains who see Batman’s absence as an opportunity to wreak havoc on the city. It was great to see Batgirl and Robin’s frosty welcome from Mr Freeze in the gameplay, but the cinematic trailer also revealed the Court of Owls and their undead army of assassins (aptly named Talons, of course) have been secretly operating throughout Gotham for decades.

Let’s get the most pressing question out of the way first. No, Gotham Knights isn’t a sequel to Rocksteady’s Batman: Arkham Knight. It takes place in its own moody continuity where the challenge isn’t to be the next Caped Crusader but to make these vigilantes into their own fully-fledged heroes. So which members of the Bat-Family will players get to know? Nightwing, Batgirl, Robin (Tim Drake), and the Red Hood are the last line of defence against the criminal underbelly of Gotham City. The new character descriptions tease each hero’s unique abilities, from Nightwing’s dual Escrima Sticks and Batgirl’s hacking skills to Red Hood’s dual pistols and Robin’s role as the team’s resident stealthy detective. Here are the official character descriptions for the new Dark Knights:

The cinematic reveal offered an impressive look at this new version of an open-world Gotham, and the stunning character designs are instantly recognisable while also delivering unique costumes for the crime-fighting quartet. Fear not! These heroes will truly feel like your own as players will be able to customize their heroes throughout the game as they unlock new gear and accessories. Just don’t give Red Hood a crowbar, okay? He’s still not over that.

It wasn’t just a stereotypical cinematic announcement without actual examples of what gameplay will look like, oh no. Fans were treated to seven minutes of Gotham Knights gameplay which showed off Batgirl racing towards an area of the city iced over by Mr Freeze. The footage showed off how players can hurtle through the city on a Batbike (or is that Bat-Trike?) as well as what the co-operative gameplay looks like. Interestingly, for a game with a roster of four heroes, the online-multiplayer campaign only lets players team-up as a duo. The combat boasted a number of stealthy takedowns while the individual levels of each enemy suggest players will have to hone their talents and level-up to defeat more formidable opponents.

Worried about whether you’ll be able to join the Bat-Family? It arrives on PlayStation 5, PlayStation 4, Xbox Series X, Xbox One and PC in 2021.

Prefer your team to be a little more roguish? Well, you can’t be more of an anti-hero than as a member of Task Force X. Surprisingly, the newly announced title from Rocksteady IS a sequel to Batman: Arkham Knight, and according to Rocksteady creative director Sefton Hill, the game will follow up on dangling plot threads and storylines from the Arkham series.

Although we didn’t get to see any gameplay, the cinematic trailer gave fans a rough idea of what to expect from four playable characters: Harley Quinn, Deadshot, Captain Boomerang, and King Shark. And unlike Gotham Knights, Suicide Squad: Kill the Justice League boasts 1-4 person co-operative play as you take on the good guys, gone bad. Players can even swap between characters at will to suit different styles of play or challenges. The first trailer brilliantly put each villain in the spotlight with a thrilling sequence showcasing their weapons and combat (it’s arguably better than the team’s first cinematic outing…): Harley Quinn uses her iconic bat in her melee beatdowns while Deadshot’s precise rifleman skills go surprisingly hand-in-hand with his weaponised jet-pack. King Shark is clearly a tank-type character, making the most of a huge minigun and brute strength as Captain Boomerang dispatches Brainiac drones with… Well, boomerangs. Obviously.

But when it comes to the Justice League, we only briefly got a glimpse of an evil-looking Superman as he ruthlessly laser-eyed an innocent helicopter pilot to death. But with Brainiac’s iconic Skullship floating around Metropolis, it’s probably an easy guess that this isn’t an Injustice-type situation. The villain’s most likely taken over the Justice League and now it’s down to the Suicide Squad to bring them down, yikes. The Kryptonian has an impressively vibrant costume design, but it’ll be interesting to see players facing off against Wonder Woman, Aquaman, Green Lantern, and The Flash. Okay fine, evil Batman can have prep-time.

Annoyingly, there’s a long wait for Suicide Squad: Kill the Justice League, as it’s slated for release sometime in 2022. The upside is it’ll be available on Playstation 5, Xbox Series X and PC.