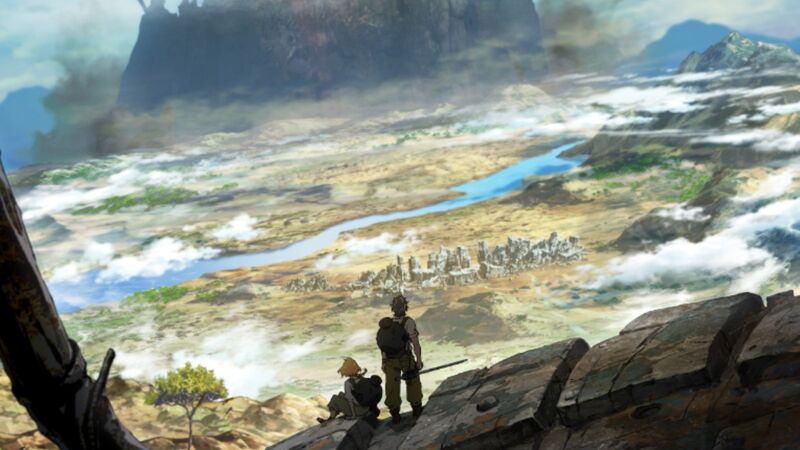 What to expect from ‘DECA-DENCE’

Do you love post-apocalyptic stories featuring huge Kaiju beasts and heroes using giant mecha weapons to take them out to save humanity? Then we’ve got the perfect new series for you to fall in love with. DECA-DENCE focuses on Natsume and Kaburaki, two of the survivors living in a giant mobile fortress protecting them from the monsters, called the Gadoll. The mysterious race of behemoth monsters has pushed humanity to the brink after wiping out 90% of the population. But what is it about the series from Mob Psycho 100’s Yuzuru Tachikawa and studio NUT that’ll instantly grab your attention?

After the Gadoll killed the majority of the world’s population, the remaining few pooled their resources to build a moving fortress to defend themselves from the beasts while providing a safe haven for humanity. The citizens living inside it are divided into two classes, Gears and Tankers. Gears are the ones fending off the Gadoll, battling them using aerial flight packs and an assortment of weapons. The fighters grouped together to create The Power, a military organization focused on defeating the monsters. While Tankers are the ones who don’t know how to fight and are instead tasked with constantly repairing and maintaining the fortress. There are a few Tankers who joined The Power, but not many. The fortress itself houses all the survivors, with most Tankers living in a single district called “Tank” and many of them grew up in orphanages leading the children living in them often form strong bonds with one another.

Aside from the stunning story, DECA-DENCE’s two lead heroes are immediately incredibly lovable. Natsume is a tanker who dreams of becoming a Gear to fight the Gadoll after she lost her father in an attack as a child. She also has a cybernetic arm since she lost her right arm in the same incident. She’s always positive and lively which often clashes with Kaburagi’s sour demeanor. Natsume is paired with Kaburagi fixing the armor on the fortress and their dynamic begins to shift when the older repairman is slowly inspired by his new partner’s optimism. Before the two meet, Kaburagi is quite blunt and has lost the will to fight the Gadoll. He was an extremely skilled fighter in the past, but after seeing the sheer strength of the Gadoll he was worn down and instead spent his days sulking. But when Natsume sees Kaburagi face off against several Gadoll creatures during a surprise attack, she’s inspired to keep chasing her dreams of joining The Power and helping defend their home. Kaburagi is also slowly influenced by his new partner’s optimistic outlook on life as she slowly breaks down his hardened exterior.

Obviously, one of the biggest elements in the show is the Gadoll monsters roaming the planet and causing havoc for Natsume and Kaburagi. With so many other shows featuring gigantic beasts, it was always going to be interesting to see how DECA-DENCE managed it, and the premiere episode which debuted at FunimationCon 2020 didn’t disappoint. Towards the end of the episode fans got a better look at the Gadoll and just how destructive they are as a horde of them attacks the fortress. There’s a variety of different designs, with some looking like giant crabs while others look like an octopus combined with a lizard.

It’s a difficult job trying to refresh a genre but DECA-DENCE has nailed it perfectly. The Gadoll aren’t all just destructive behemoths though, Kaburagi even has a small one as a pet named Pipe. The armor repairman found him on the battlefield during his fighting days and decided to keep him, since he wasn’t violent. Although judging by the huge Gadoll featured at the end of the premiere episode, it’s safe to say that Pipe’s in the minority here. But what other types of Gadoll are waiting for this dynamic duo? Only time will tell.

Natsuma and Kaburagi obviously aren’t the only ones left fighting the good fight against the Gadoll; the fortress is manned by the last remnants of humanity and is home to a number of other colorful characters. Some of them are close enough to be family, others not so much. Natsume’s best friend Fei has always looked out for her since they grew up in the same orphanage, however, she’s always been worried about Natsume’s dream to become one of the Gears. So when Natsume became one of the armour repair crew, she was relieved that she wasn’t going to be up against the Gadoll. Although that’ll definitely change as the series goes on. It wasn’t always peaceful for Natsume growing up though, she constantly butted heads with Linmei. The girl always picked fights with the would-be-gear and was always backed up by her own group of cronies. It’ll be interesting to see how their relationship will change by the end of the series.

When it comes to fighting as a Gear and joining The Power, Natsume admires Kurenai, a seasoned fighter who’s both brave and merciful. She’s also got a cape, everyone loves capes (apart from Edna Mode.) She leads her troop of warriors alongside Sou and Ryu, two other fighters. Hopefully once Natsume gets the chance to prove her worth, she’ll be able to join Kurenai on the battlefield. If she does, she’ll be directed by Minato – the Commander-in-Chief of the fortress and an old friend of Kaburagi. The leader constantly worries about the former-warrior following his retirement, since Kaburagi became quite apathetic once he left his old post. But if the battle becomes a little too much for Natsume, at least she’ll have her close friends to fall back on – like Fennel. He’s another Tanker who looks out for her, he might take things a little too easy in the dangerous world of DECA-DENCE, but he’s a fairly positive person. Fennel definitely has a soft spot for Natsume, as he often takes her out for dinner.

See, it’s not all fighting gigantic monsters in explosive battles! The cast is a diverse bunch and watching them band together to defend themselves from the Gadoll is going to be an action-packed roller-coaster.