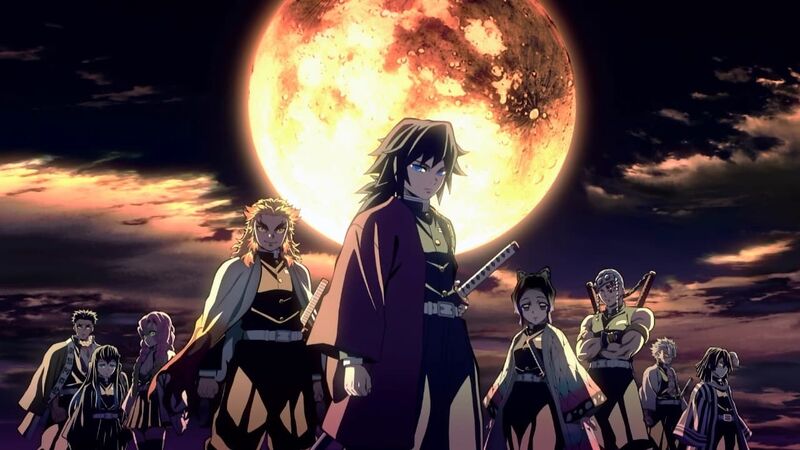 The Demon Slayer Corps is the front lines of defense against the monsters of Demon Slayer: Kimetsu no Yaiba. Beloved heroes Tanjiro Kamado, Zenitsu Agatsuma, and Inosuke Hashibira are among their number, but they’re far from the group’s most powerful members. The top nine warriors of the Corps are called Hashira (literally “pillars”), and each of them has an important part to play in Demon Slayer.

Hashira overcome arduous training and defy death to reach the Demon Slayer’s highest echelon. Each Hashira has either slain at least 50 demons or single-handedly defeated a demon in the lower ranks of a group known as the Twelve Kizuki.

Did the preview for the upcoming Swordsmith Village arc make you wonder, “Who’s that Hashira again?” Here’s the cheat sheet to help you remember who’s who in the Demon Slayer Corps’ upper ranks.

Rengoku fights with his heart ablaze! Kyojuro Rengoku is the Flame Hashira of the Demon Slayer Corps. His fiery red and yellow hair makes him instantly recognizable, and Rengoku has a passionate personality to match. Whether he’s enthusiastically enjoying a bite of his dinner or fighting an upper rank demon, the Flame Hashira gives it his all. Rengoku embraces his role as a protector with a smile — and without any hesitation.

“He’s so quick to read the situation and make decisions,” Tanjiro observes.

Rengoku uses the Flame Breathing technique to swing his sword in an awe-inspiring flash of heat and light. Trained in swordsmanship by his father and later self-taught by instructional texts, the Flame Hashira strikes faster than the eye can see.

The Flame Hashira is a cornerstone of the Demon Slayer -Kimetsu no Yaiba- The Movie: Mugen Train movie released in Japan in 2020.

Shinobu Kocho comes to Zenitsu’s aid in the Natagumo Mountain story arc in Demon Slayer’s first season. Her elegant, butterfly-like jacket billows around her as she glides through the air — but don’t let Shinobu’s soft-spoken and gentle nature fool you. Shinobu Kocho, the Insect Hashira, is just as deadly as any other pillar of the Demon Slayer Corps. Her dulcet voice delivers devastating statements with sugary politeness.

“Shinobu’s voice is totally unique,” notes Zenitsu. “It lacks regularity, and it scares me a little.”

Her low tones hide her barely contained rage at the demons who killed her older sister. Insect Breathing is her technique, and she unleashes it against demons with superhuman accuracy. Shinobu is the only sword wielder in the Corps who lacks the physical strength to behead a demon, instead using a wisteria toxin of her own design to destroy them from the inside out.

Mitsuri Kanroji is the good-natured Love Hashira. She feels strongly with every fiber of her being — and often voices adoration for just about everyone she encounters. She’s also prone to getting  the giggles. Emotional and easy to read, Mitsuri is exceptionally expressive among the pillars of the Demon Slayers. The pink haired Mitsuri immediately has a soft spot for the unconditional love and sibling bond between Tanjiro and Nezuko.

Like the other Hashira, however, Mitsuri is more than she seems. She’s observant and fierce when the need arises. The Love Hashira is also an accomplished swordswoman who adapted Rengoku’s rigorous Flame Breathing training into her own specialized technique of Love Breathing. She possesses extraordinary flexibility that also enhances her one-of-a-kind style.

Mitsuri’s time to shine is in the upcoming Swordsmith Village episode arc.

Muichiro Tokito, the Mist Hashira, plays a big role in the Swordsmith Village arc alongside Mitsuri. As the Hashira gather in the safety of the Demon Slayers headquarters in the conclusion of the Natagumo Mountain story arc, Muichiro seems to be in a world of his own. He’s prone to staring at the shapes the clouds form in the sky. But when his attention turns to the matter at hand, he’s precise and straightforward.

Muichiro suffers from memory loss and appears to lack emotions. While he might seem indifferent to what’s happening around him, the Mist Hashira actually harbors rage and hatred for all demons after they took the most important person in his life from him.

The Mist Hashira is only 14 years old, but he’s already a respected and powerful swordsman. Muichiro mastered the Mist Breathing technique in a surprisingly short amount of time, able to swing his white katana blade at blinding speed.

The pragmatic and harsh Obanai Iguro is the Serpent Hashira. He’s clearly identifiable by his different-colored irises, white bandages covering his mouth and chin, and black and white striped pants. He’s often accompanied by a white-scaled snake.

Obanai is one of the more guarded Hashira due to his prickly exterior. He’s just as driven as any of them to root out and destroy demons, however, and is indispensable in some of the series’ biggest battles. Like Mitsuri, Obanai created his own sword technique. Serpent Breathing plays to his strengths, like his sharp senses, and incorporates his unique wavy katana blade.

Tengen Uzui, the self-proclaimed God of Festivals, is the boastful Sound Hashira. The large, muscular swordsman takes pride in being flamboyant. The flashier, the better! Tengen Uzui wields a gigantic cleaver-like sword in each hand and they strike with unerring precision. He has little to no patience for those he deems plain and mundane, declaring that their lack of flamboyance is the reason why they’re so weak.

“I’m Lord Tengen Uzui, former shinobi,” he says by way of introduction. “A flashy man renowned around these parts.”

The show-stopping Entertainment District arc stars the Sound Hashira as he investigates the disappearance of his three wives. Tanjiro, Zenitsu, and Inosuke tag along as maidens in disguise to infiltrate the local geisha houses. Uzui knows that a demon is involved with one of the houses, and he needs the young Demon Slayers to uncover the right one.

Gyomei Himejima’s tear-streaked face shows the overwhelming emotions the Stone Hashira often feels. He’s struck by the plight of Tanjiro and Nezuko, even if he doesn’t agree to Nezuko fighting alongside the Demon Slayers at first. Gyomei is pious in nature and often prays for those he deems unfortunate. His kindness is as immense as his physique; Gyomei is considered to be the strongest of the Hashira.

The towering Gyomei is an incredibly skilled combatant and wields a chained axe and flail with his indomitable Stone Breathing technique. Blinded as a child, the Stone Hashira’s other senses are heightened to compensate.

Gyomei is indispensable in the Demon Slayer Corps’ final battles.

Giyu Tomioka is the Water Hashira. His deep-blue katana slashes with the force of a crashing ocean wave, powerful and unyielding.

“I’ve never seen anyone as incredible as this guy!” Inosuke marvels when their paths cross for the first time.

Giyu’s face rarely betrays any emotion. Like one of his advanced Water Breathing techniques, the Water Hashira exudes dead calm. Tanjiro’s tearful pleas to spare his sister’s life are one of the few things to break the Water Hashira’s façade.

“Don’t ever give others a chance to murder you!” Giyu yells in disgust. “Stop that pathetic groveling!”

He has no respect for the weak, but he understands Tanjiro’s feelings. He sees something different in Tanjiro and Nezuko and sets them on their path to the Demon Slayer Corps.

Giyu’s expressionless face masks his compassionate nature. Not only did the Water Hashira spare Nezuko’s life the first time they met, but he later protects her from fellow Hashira Shinobu Kocho. He stakes his life on his belief that Nezuko is not a danger to humans.

The heavily scarred Wind Hashira, Sanemi Shinazugawa, is brusque and hot-tempered. He feels nothing but hatred for demons. When Tanjiro and Nezuko first arrive at headquarters, he has no sympathy for either of the siblings. Shinazugawa and Tanjiro butt heads from the get-go. (Literally.) The spiky-haired Hashira is often rude and abrasive, even to his closest allies.

Nonetheless, Tanjiro notes the utmost respect with which Shinazugawa addresses the leader of the Demon Slayer Corps, Kagaya Ubuyashiki.

The Wind Hashira’s younger brother, Genya, is also in the Demon Slayer Corps’ ranks; he plays a big part in the Swordsmith Village arc alongside Tanjiro.

Shinazugawa attacks demons with a green-bladed katana through his Wind Breathing technique. The Wind Hashira, like the Serpent Hashira and Stone Hashira, is an invaluable asset in the Demon Slayer Corps’ most important battles.

Kelly Knox
Kellyknox
Kelly Knox is a writer and author in the Seattle area. She's a frequent contributor to the websites for pop culture powerhouses like Star Wars, DC Comics, Crunchyroll, and more.