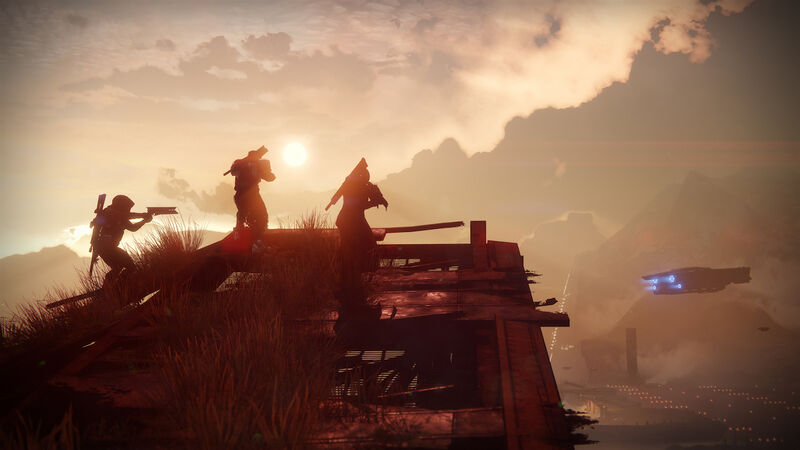 ‘Destiny 2’ Review: We Give Our Final Verdict On Bungie’s Ambitious Shooter

When Destiny first launched in 2013, it promised to be a game unlike anything else. Developed by Bungie, the creators of the beloved Halo franchise, this ambitious new IP looked to combine MMO-style worlds with fast-paced shooting and an addictive loot system. Sadly though, as gamers well know, this wasn’t quite the Destiny that we got at launch.

While Bungie’s innovative blend of genres initially felt bold and refreshing, its shiny and exciting exterior soon peeled away, revealing a game built around a disappointing narrative and a highly repetitive gameplay loop. With many gamers’ awe quickly turning into frustration, players left Destiny in droves, fed up of what they saw as a repetitive and soulless grind. Thankfully, Bungie managed to right its initial wrongs… eventually.

The next couple of years saw the studio substantially reworking the game’s convoluted leveling systems, as well as adding some much needed personality to the game with 2015’s sizable expansion, The Taken King. Two years and one DLC pack later, Bungie has finally released a fully fledged sequel to its divisive sci-fi shooter. But does this sequel deliver on the studio’s promise of an epic shared-world shooter?

After living with the game for just over a week and exploring its beautifully orchestrated world, we’re happy to say that this time around, Destiny finally feels like the sci-fi etc it was always meant to be. While we were feeling pretty lukewarm about Destiny 2 after the overly familiar beta, thankfully, the full game shows that Bungie has been paying close attention to fans’ criticisms.

The first thing you’ll notice about Destiny 2 is just how much bigger everything feels. While the first game attempted to mask its small and samey environments with epic-looking photoshopped skyboxes, all the flashy backdrops in the world couldn’t hide the fact that missions took place on an incredibly small scale. Thankfully, Destiny 2 features far more expansive and immersive missions than its predecessor.

Freed from the shackles of Destiny 1’s last gen engine, campaign missions have now not only grown in size but in ambition, too. As anyone who played the beta’s opening level will attest though, Destiny 2 actually starts off in pretty linear fashion. Shuffling through The Tower as Ghaul’s forces invade, it’s exactly the kind of tightly-knit experience you’d expect from the first game. Interestingly though, this opening has actually been given some pretty cool new cinematic tweaks for the full release. With your path through the tower taking far longer to navigate in the final package, Bungie have tweaked this into an expertly-paced opening, littering the level with cinematic touches.

Yet, its after you meet baddie Ghaul that Destiny 2 really reveals its true colours. Stripped of your abilities and armed with only basic weaponry, you find yourself  thrust into a sprawling and surprisingly lush-looking world. With Ghaul having destroyed The Tower and coming after the rest of the unvierse, it’s up to you to navigate these hostile worlds and win back whatever supplies you can for your fleeting band of survivors. This setup really works with the core gameplay, making you feel like you really have areason to be exploring the sprawling environments you find yourself thrust into.

Ultimately, it’s this sense of the cinematic that really defines missions in Destiny 2. Instead of just sending you from corridor to corridor like in the last game, much more care has been taken in setting the scene this time around. This small effort goes a long way, making the game’s environments feel far less like soulless shooting galleries and more like the lived-in places they’re supposed to be.

Thankfully though, this more open approach to level design isn’t just a one off, as these more expansive environments form the backbone of Destiny 2’s PVE. Instead of simply hopping in your ship and flying from mission to mission, this time, once you land on a new planet you’ll have to make your way to your destination on foot.

Guardians Encounter Side Missions On The Way To Main Objectives

Playing like a mix of the last game’s Patrol missions and Destiny’s main story, each planet you visit is filled to the brim with  cool little side missions that you’ll discover on the way to your main objective. With the trusty Sparrow speeder locked until level 20, players have no choice but to explore each hostile new planet by foot. This adds a welcome sense of variety to proceedings, breaking up the mission-to-mission slog and allowing you to delve  into public events or the side quest style Adventures as you please.

For the first time in the series, this helps you feel like you’re actually part of something bigger too, creating a  welcome sense of atmosphere. Crucially, it also finally feels like the minute to minute gameplay actually matches the story that Bungie is trying to tell.

A large reason for this is how varied each planet is. With our adventures so far taking us everywhere from a lush forest to a dilapidated harbour, each refreshingly different locale makes you feel like you’re genuinely doing something different.

Combat Wise, This is Business As Usual

While where you fight and why you fight may have changed pretty drastically in Destiny 2, how you fight definitely hasn’t.  With the Hunter, Titan and Warlock classes returning once again, fighting hordes of The Fallen and Vex feels pretty familiar. Thankfully, there are two new subclasses to play with. Yet, although each new addition and the slew of new weapons have their own little quirks, the combat here is pretty much the same Destiny combat you remembered. Considering the gunplay was the best thing about the first game, that’s definitely not a problem for us.

Some missions, however, see you indulging in bouts of platforming, with others even putting players behind the wheel of deadly new vehicles. While a few of the game’s later missions lose a bit of the early campaign’s spark, thankfully Bungie brings its A-game for the finale. We don’t want to spoil it, but trust us, you’ll want to see this story through to the end.

Crucible Is More Of The Same, But Competitive’s Team-Focused Gameplay Is Brilliant

Quickplay matches here see you indulging in a standard deathmatch. Competitive, however, is a whole different ball game. Split into two teams of four, this intense mode sees each squad sharing eight lives. With only limited respawns between them, the whole dynamic changes, forcing players to stick together and think carefully before rushing into action. Once a team starts racking up the kills, however, the dynamic shifts to that of a brilliant game of cat and mouse. When your team runs out of respawns and the enemy’s closing in, this competitive mode absolutely shines, creating a nail-biting take on the well worn team deathmatch.

In a nice touch, hopping between PVE and PVP is a far smoother process this time around, with the game’s new directory allowing you to seamlessly travel all across the game’s universe. This is a small but much appreciated change, with Destiny 1 forcing players to exit each planet before being able to access their ship.

It’s this sense of streamlined player experience that really defines Destiny 2.  Where the first game had you grinding for hours just to experience increasingly diminishing returns, this is a sequel that trims away its processor’s frustrations, firmly putting fun first. With a wealth of different activities, and more crucially, different feeling activities for players to immerse themselves in, Destiny 2 manages to avoid the soulless grind of the first game. Thanks to jaw-dropping visuals, well thought out levels and a spine-tingling orchestrated score, Bungie’s ambitious sequel oozes atmosphere and personality by the bucket load.

If the MMO, loot-orientated gameplay put you off the first game, this sequel probably won’t do enough to change your mind. The core gameplay loop here is pretty much the same as it ever was, yet thanks to a slew of small changes, Destiny 2 feels like the game the first one always should have been. If your main gripes with the last game were its lack of mission variety and poor story, Destiny 2 might just be the sequel that turns you into one of the engram-obsessed horde.